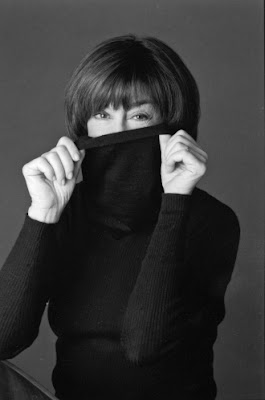 I just got a horrible e-mail from Knopf that Nora Ephron died after a long battle with leukemia. I interviewed her six years ago, and she was so funny and so tough. Ephron looked at me like a cat looks at a mouse. I almost felt like she was thinking, "Should I keep batting him against the baseboard or should I just go in for the kill?" Seriously, Ephron had such a sharp intellect and made so many people laugh. She will missed.

(Originally published in the Newark Star-Ledger in August 2006)

In her first book of new essays in 25 years titled “I Feel Bad About My Neck, And Other Thoughts on Being a Woman”(Knopf, $20), writer, screenwriter and film director Nora Ephron tackles the comic indignities of growing older and women’s attempts to stop the aging process.

Starting with the idea that a woman’s neck usually collapses at the age of 43, Ephron moves on to an essay called “I Hate My Purse,” which chronicles the insanity of purses stuffed with the wreckage of life. Using sharp self-parody, Ephron covers her addiction to hair coloring, her brutal beauty maintenance regimen, her 20-year romance with a cheap rental apartment in Manhattan and a mirthful list of things she should have known, including “The last four years of psychoanalysis are a waste of money.” Beneath the comedy, Ephron addresses such serious topics as finding true romance in her forties. Her last essay, “Considering the Alternative,” is a moving take on death and friends lost.

Ephron, 65, was born in New York City, raised in Beverly Hills and educated at Wellesley College in Massachusetts. She started as a newspaper reporter at the New York Post, became a prominent writer for Esquire, wrote the bestselling books “Crazy Salad” and “Heartburn,” crafted the screenplays for the modern classics “Silkwood” and “When Harry Met Sally,” and directed “Sleepless in Seattle” and “Bewitched.” Ephron lives in New York City with her husband, the writer Nicholas Pileggi, and spoke with freelance writer Dylan Foley at her publisher’s office in Manhattan.


Q. Why did you start the book with the essay on your neck?

A. Why did I start the book with the neck? It’s the title of the book. You start with the title, don’t you think? It’s kind of like organizing a CD. Do you put the strongest piece first or second? This is one of the mysteries of life. I thought I’d lead with my neck. I went from the most trivial to superficial thing to the something that is not superficial.

Q. Do you think the book is about the absurdity of growing older and fighting the aging process?

A. The whole impulse for the book was to write about something people don’t talk about. I am completely fascinated that people my age think that if they don’t tell people how old they are, no one will know. If everyone can pretend that old age is some kind of blessing, and god knows it is compared to dying, they think no one will catch on to the idea that it is a very complicated period of your life. It began to irritate me that no one was telling the truth about growing older, that there was this impulse to make it all seem so cheerful. The good news is, you are much wiser, but what about the rest of it? When I first got the idea of writing about my neck.

Q. You write that there are no white-haired women in Manhattan. When did you have this epiphany?

A. We were having a dinner at Le Cirque for Jean Harris (the headmistress who shot the Scarsdale Diet doctor). She was the only woman there who had white hair. She had just gotten out of prison. That was the epiphany. There is no question that in places where people have money, they do more to stop the aging process than in places like Iowa. In places like Iowa, where I have been, you see a lot of women with gray hair in their 30s. They just let it go.

Q. You write this bittersweet essay about losing your rent-controlled apartment in Manhattan after more than two decades. What is the purpose of the piece?

Q. It’s been 25 years since your last book of essays, “Scribble, Scribble.” Why did you return to the essay form?

A. The truth is after I wrote the essay about the neck and the purse, I said, “I think I can do a book circling this question of age.” I made a list of things that might go into the book and then I wrote most of them--the apartment piece, the maintenance piece. I started writing a list of things I’d wished I’d known, then I knew that I had to write a piece on death

Q. In your career, you've moved from newspaper writer to magazine essayist, to novelist and screenwriter, and finally film director. Did you see a natural progression in your career?

A. What I have been lucky about is that every seven to 10 years, I have been able to learn something new to do. Every X number of years, things came along that refreshed my work or gave me an unbelievably steep learning curve. It keeps you absolutely awake. Even the blogging I am doing for the Huffington Post is a completely different way of writing than these essays. If you spend too much time writing them, you are not doing them right.