David Sedaris on "Dress Your Family in Corduroy and Denim" 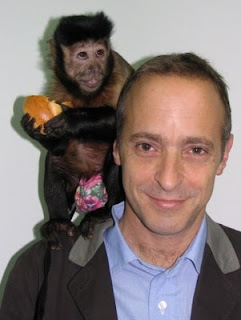 
(I have always thought that David Sedaris is one of America's most talented humorists, though there is a caustic nasty streak to all his work. About a month after I interviewed him, I received a "thank you" postcard, where he or his assistant referred to my status as a freelance writer in New York. "My friend is a freelance writer in New York," wrote Sedaris. "He has difficulty making a living. I don't know how you can."  Ah, what rage, what rage.)

David Sedaris trains his reluctant genius on the foibles and absurdities of his kin, and himself
The fabric of family lore

Humorist David Sedaris has achieved rock-star status. The writer routinely sells out 2,000-seat halls throughout the United States, Europe and Australia. His die-hard fans have pushed his new book "Dress Your Family in Corduroy and Denim," only released several weeks ago, to the top of the national best-seller lists.

"I enjoy touring," said Sedaris, 47, in his trademark reedy voice from his Paris apartment, where he has lived the expatriate life for the past six years. He was preparing for a month in America, which included a stop at Denver's Tattered Cover Book Store on June 23. "It is nothing personal at all, but the only thing I don't like about book tours are the interviews. I am really bad at talking about writing. I seem to have a child's vocabulary when it comes to talking about it."

After that jab, Sedaris turned out to be a charming and tortured interviewee with a razor-sharp intellect. He spoke about his famously dysfunctional family, his refusal to write about sex and the victory of the nerds at National Public Radio, where he got his big break with the "Santaland Diaries," a radio show about the brutal world of being a Macy's Christmas elf, in 1992.

Sedaris has made a career of pointing out the horrors of everyday life, often writing of the foibles of his five siblings and his long-suffering boyfriend, Hugh. In the new collection, he draws very different portraits of his quirky mother and mocks his own control and neat-freak tendencies. The popularity of Sedaris is linked directly to his brilliant writing and his eternal, eccentric outsider status.

His family has offered up a wealth of material. His sisters, however, may not talk on the record anymore. "They'll preface certain things with 'Please, don't write about this,"' said Sedaris, who in the new book admits to his habit of carrying around a notebook to write down dialogue during tragic family discussions. "They've gotten paranoid. They know me too well."

In "Dress Your Family in Corduroy," Sedaris presents several comical views of his late mother. She is the helpless 1960s hippie mom, then she is the mother bear protecting a clueless son from a predatory 9-year-old neighbor stalking him in "The Girl Next Door."

"I've written stories about my mother before," said Sedaris, "but I gave her all the wise, smartass lines. There is a story about buying a boathouse in the new book. We were trying to name the house. My mother said, 'What about something with sandpipers in it? Everybody likes sandpipers, right?' It is just a naked thing to say. It's not funny, but there is something that just breaks your heart with a line like that."

The views of his mother came from the unintentional nature of the book. "I never set down to write this book," he said. "I go on lecture tours. I like to have three or four new pieces, and I go back to my room and rewrite them," and the resulting stories portray his family and other characters in different lights. "If I'd sat down and written it from beginning to end, my mother would have been more standard."

Even though he is a writer who mines almost everything in his life, including losing control of his bowels on a French train, Sedaris has avoided sex. "I'm not a good sex writer," he confessed. "When I go on the lecture tours, you say the word 'I' when you read out loud, and people would imagine me having sex. It is not pleasant for people to imagine me having sex."

Sedaris still does pieces for "This American Life," the National Public Radio show hosted by Ira Glass, the broadcaster who gave Sedaris his first big break. The show is a collection of bright men and women, including writers David Rakoff and Sarah Vowell, who were most likely bullied and beaten up in high school. Among their fans are probably the mean quarterbacks and cheerleaders who used to humiliate them, who are still pumping gas in their hometowns.

"It is really a 'Revenge of the Nerds' coalition that Ira has going there," Sedaris said with a chuckle. "I think people imagine us as living in a big communal home and talking to each other every day, but it is really not that way."

The personal writing started because of the radio work. "I was writing fiction," said Sedaris. "For the radio, things had to be true or true-ish, so I started writing about myself. Once you establish yourself as a character, people know who you are and you can go ahead with the story."

Several years ago, Sedaris' last collection, "Me Talk Pretty One Day," about the culture clash of being a new immigrant in France, was optioned to be made into a film. Sedaris writes about this experience and his sister's horror at the forthcoming movie in the piece, "Repeat After Me."

"I looked at myself in the story, and I thought, 'God, I really am a horrible person.' There is a line when my sister Lisa says, 'Will I have to be fat in the movie?' When someone says something like that, they are conveying that they have no choice, that their entire identity has been taken for the page, and is now being slapped on the screen and they have no control over it whatsoever."

Sedaris opted out of making the movie. He still feels the detached guilt of his compulsion to write about his family. "The best thing is for a person to realize that this kind of thing is wrong, and you just don't do it," he said. "Instead, I just do it, and I say, 'I'm really sorry.' That's what makes for an evil person."

Despite his great financial success (he owns homes in Paris, London and New York City), Sedaris still returns to the dark and bizarre side of human nature. In the new book, there is a psychotic, scamming tenant and a teenage Sedaris with his obsessive desire to buy a cherry-colored suede vest.

"I have an eye for things that are absurd in some way," said Sedaris. "Sometimes, I will walk into a room and say, 'Somebody's missing a hand in here. I know it. I can just feel it.' Somebody might notice a person is charming or has a vast knowledge of history, but I'll notice that they are missing a hand."