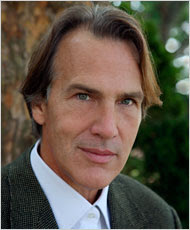 In the late 1970s and early 1980s, Dirk Wittenborn's career as a New York writer was golden. He was collaborating with Gilda Radner and John Belushi of the original ``Saturday Night Live'' ensemble and had two acclaimed novels under his belt, including 1983's ``Zoe.'' Then, Wittenborn almost destroyed himself with a cocaine addiction and was told he'd never work again. He also nearly died from a rare virus that literally turned his heart to stone.

Now the 50-year-old Connecticut native has turned things around, with a new daughter, and his first novel in 18 years, ``Fierce People'' (Bloomsbury), the story of a teenager swept into the world of the dangerously ultrarich. ``I have to quit, because you should," said Wittenborn, waving a lit cigarette as he sat down with the Courant in Manhattan, "but I have all these writing deadlines to deal with."

Northeast: How did your family wind up in Connecticut?

Wittenborn: My father taught at Yale. We lived in Hamden. My father came to New Haven with a classic Midwestern fascination with Eastern gentility. His specialty was psychopharmacology. In the 1950s, he was on the cutting edge -- memory, learning and drugs. As a kid, I was fascinated by his gruesome tales. He didn't censor himself around the kids. He once told me about a woman who worked in the mental hospital kitchen, who killed her husband, cut him up and fed him to the chickens. These stories were a writer's paradise.

Northeast: Do you have your own experiences with rich people behaving badly?

Wittenborn: It is very hard for the really rich people not to behave badly. There is a line in the book, and I am paraphrasing myself, that ``Rich people seem more screwed up, but they don't have anything to do all day, so they can act like themselves.'' I was the poor boy at the party. I was middle class in a rich enclave.
When people talk about how they are seduced by wealth, they make it sound like a scene out of ``The Godfather.'' It is much more subtle than that. If people have a lot of money, it is hard to say no to them. There are many people waiting to sell their souls, to sell their firstborn. The tragedy is that there are not enough devils.

Northeast: You had become a successful screenwriter and script doctor. Why did you return to novels?

Wittenborn: I hadn't written a book in a long time. I was a very destructive person at one point during my career in the 1980s. It was the era when sex was safe and cocaine was not addictive. I got very sick. I'd caught a virus, probably in Indonesia, that went unchecked. It felt like my organs were coming detached. My heart was calcified, encased in stone. The doctors took it out of my body and peeled it like an orange. It was a second chance. I threw myself into scriptwriting, but each year I didn't do a novel, it loomed larger and larger. I had terrible writer's block. A therapist suggested that I recreate the last time it was fun to write fiction, which was when I was in my 20s. I got a manual typewriter, I bought a record player and all the 1970s music -- The Clash, Bob Dylan. It was the typing, the visceralness. Your fingers hurt, but by the time they are numb, you are on a roll.
Northeast: You have survived drugs and heart disease. Do you have any views on the destructive artistic impulse?
Wittenborn: What I worry about is the perversity of myself, that I wanted to see if I could wreck it all and build it up again. I feel lucky to have lived through the heart operation. You come to the city to be a writer, and you become cynical, hard-hearted. Having that heart operation stripped me bare. I'm not a Catholic, but I paid for my irresponsibility, my childishness.

Northeast: During your downward spiral, were you really told you would never work again?

Wittenborn: Those were my friends! People told me I'd never sell another novel again. People are very harsh. It's like you're the crazy Indian -- you have what other people are striving for and you throw it away. If they value talent, and you don't value it, it is very disturbing to people. There are some things I regret, but that made me who I am.
Northeast: What are you working on now?

Wittenborn: I have just finished the screenplay of my book for Griffin Dunne. My wife and I also had a baby last year. My wife's water broke on Sept. 11th. The baby was born three days later. She was fine. The birthing room had windows. I was holding my daughter in my arms, and an F-16 went down the East River. The seriousness of life puts things in perspective. I don't take things lightly anymore.
Posted by Dylan Foley at 9:08 AM