Art critic Robert Hughes on His Personal History of 'Rome' 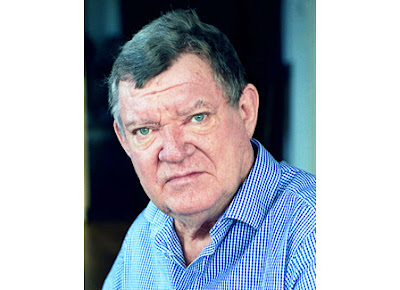 In 1959, the Australian art critic Robert Hughes was a 21-year-old student on his first visit to Rome. The city blew him away, from the Spanish Steps to the Coliseum, where gladiators fought each other to death 2,000 years ago.
Fifty-two years later, Hughes has written “Rome: A Cultural, Visual and Personal History” (Knopf, 500 pp., $35), in which he gives readers a fluid look at the Eternal City — from the founding myth of Romulus and Remus to the bloodthirsty Roman Empire, the medieval period, the Renaissance and present-day Rome. In Hughes’ intensely intimate view of the city, he delights in Julius Caesar being the biggest slave trafficker in Rome and the church murals of saints being tortured to death. Hughes muses on the relic hysteria of the Middle Ages, when every church had to have a drop of Jesus’ blood and the foot of a saint, and Michelangelo’s brutal journey to finishing the Sistine Chapel.
The 73-year-old Hughes was Time Magazine’s art critic from 1970 to 2001. He spoke with freelance writer Dylan Foley by telephone from his home in Manhattan. Q. Imperial Rome was incredibly filthy, with garbage and excrement piled up on the street, as well as dead horses. How did the residents dispose of their chamber pots?
A. They would throw the coarse terra cotta pots out the window. There was a law saying that if you brained a passer-by with a night urn, you’d have to pay for their medical fees and lost work time.
Q. Santo Stefano Rotondo is a church famous for its murals showing how ancient saints were sliced, diced and broiled on their way to martyrdom. How did these murals affect you?
A. Being a once-practicing Catholic and suddenly being immersed in this Roman iconography, this stuff was very upfront, showing the hopes and fears of the church. They were much more vehement than the Catholic representations that I knew in Australia.
The murals were meant to be gory, to provoke pity and terror. I’ve thought of it as a Sistine Chapel for sentimental sadists. There is flogging, drowning and even cooking saints in boiling oil, like a Trastevere artichoke. Santo Stefano isn’t one of my favorite churches because I never really liked the art.
Q. If you were taking a nephew to Rome for the first time, what would you insist that he see?
A. I’d insist that any nephew should come with me to the important Baroque monuments. I’d definitely start him off with Gian Lorenzo Bernini’s 17th century masterworks, including the Barcaccia Fountain and the Cornaro Chapel. Rome is truly a Berninian city, par excellence. What Bernini is attempting to do is to ramp you up into a state of wonder, saying, “If this can’t do it, nothing can.”
Q. Can you tell me about the physical and emotional toll that the painting of the Sistine Chapel had on the great artist Michelangelo?
A. He wrote a poem where he said, “I’ve grown a goiter at this drudgery.” Michelangelo experienced fatigue, frustration and inspiration while painting the ceiling of the Sistine Chapel.
Q. At the end of the book, you go on a rant, comparing the Rome you first saw in 1959 to the Rome of 2011. Now, the museums and churches are swamped with tourists. How can you view art in Rome now?
A. Well, the historical sites are almost inaccessible, but by going repeatedly to them, you can have meaningful visits. The only way you can really appreciate a work of art is in relative silence. I don’t mean there should be an enforced silence, but the artwork should have an opportunity to talk directly to you. You can get this only by going to the same sites multiple times.
Posted by Dylan Foley at 6:19 PM

Labels: I've grown a goiter at this drudgery, Robert Hughes, The Sack of Rome