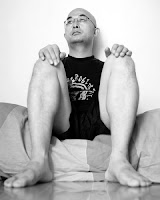 The Horror of Chinese History

Chinese dissident writer Liao Yiwu may be the most censored writer in China. He has just published The Corpse Walker: Real-Life Stories, China from the Bottom Up(Pantheon, $25), his brilliant collection of oral histories of Chinese citizens, including the stories of a crazy peasant emperor locked in prison, a public restroom manager, a former landlord harassed by the communists and an innocent man accused of grave robbing.

Liao is is likely the most censored writer in China. “The Corpse Walker,” translated by the journalist Wen Huang, is history from the bottom up, a brutal look at 50 years of communism under Mao and the repressive communist-capitalist hybrid that China is now. As riots break out in Tibet against Chinese rule and worldwide boycotts threaten the Beijing Summer Olympics, Liao’s book could ot come at a better time.

For Liao, the oral histories started in prison in 1990, where he spent four years being beaten and tortured for his poem “Massacre,” which compared the 1989 Tiananmen Square slaughter by the Chinese army of students to work by the Nazis.

“I was thrown in jail,” said the 50-year-old Liao on a phone that was almost certainly bugged by the police at Liao’s mother’s house in Chengdu, Sichuan Province. “At the beginning, everything was quite unintentional. I was with a group of people who were living at the bottom of society. There were people on death row. I was locked up with murderers. Initially, I didn’t know how to communicate with them, even though we were all Chinese. I was like an alien. Eventually, we learned to communicate with each other. I didn’t intend to record their lives, but as a writer, my basic instinct was to listen to their stories.

In prison, Liao interviewed a mad peasant emperor, a safe cracker on death row, and a ex-banker who witnessed the Tiananmen Square, spoke out and destroyed his career. When Liao got out of prison, he traveled around the country, interviewing professional mourners to wail at family funerals, and the almost mythical corpse walkers, who carry dead people hundreds of miles so they can be buried in their hometowns.

Liao then pulls out the horrors of the last 50 years of Chinese history, exploring the famine that resulted from grotesque mismanagement where 30 million died, and the violence and absurdity of the Cultural Revolution by interviewing former Red Guards who harassed and sometimes killed intellectuals and professionals. Liao shows a Chinese government that still crushes the small people and tortures the innocent. In 27 interviews with common people, Liao creates an unforgettable, grim and often witty picture of modern China.

Liao’s history is not about Mao, but the brutal effects of communist on the lower rungs of society. “I am trying to write history from the perspective of ordinary people,” said Liao. “Through them, you see modern Chinese history and the impact on them. I want to show you can learn history through ordinary people.”

A sanitized version of “The Corpse Walker” was published in China in 2001. The book became a bestseller, then the government shut the publishing house down. “The government banned this book because some people think that this book is political,” said Liao. “I don’t think it is so. Some people tell the government, how can this book be so pessimistic? People should always be optimistic and progressive. What I show in the book is that people are living in such misery. This is why the government felt threatened by my book.”

Over the past 15 years, Liao has been subject to constant harassment by the police. He keeps pushing on, remembering his teachers--hunger, prison and homelessness. “What motivated me initially was that I tried to rebel against the government and society when I was young and I had a lot of energy,” said Liao. “As I grow older, I grow more wise and mellow about things. I treat everything as my teacher. My enemies are my teachers. I had hunger and it taught me a lot. I have this incredible memory. I got this memory in prison. When I was in prison moth after month, year after year, I had to force myself to learn. My compulsion is to remember and record things. Prison also taught me the real meaning of freedom. Another reason that makes me write is it has become a habit. That is a continuation from my life in prison. You have to go on, in order to learn.”

Liao sees no choice but to keep collecting his stories. “I have no choice but to go on. For many years, I have survived and have collected many stories. I go on, despite the risks. I hope I do as good a job as my counterparts in the West who wrote about the Soviet gulag and the Nazi concentration camps.”

Sometimes, the temptations of love and a home get to Liao. “ I do crave a healthy and normal life,” he said. “To seek freedom, my mind and soul need to be free first. Someday, when I get tired, I’ll look for another option. I leave my life to the heavenly God. Whatever happens, happens.

Liao’s last interrogation by the police was in December, when he traveled to Beijing to accept a human right award. The police picked him up and barred him from receiving the award. During the interrogation, Liao harangued the police and then the policemen took him to dinner at Liao’s friend’s restaurant before they sent him back to Sichuan province.

“A lot of people characterize oppression as coming from the state machine,” said Liao. “I feel there is the need to communicate, not only with the people I interview, but with the police. The police are human.

Dinner instead of a beating is an improvement, noted Liao. “The fact that I could have dinner with them, then they sent me back to Chengdu, was some kind of progress,” he said. “This would not have happened several years ago. By the way , the police picked up the check for dinner.”

Dylan Foley is a freelance writer in Brooklyn, N.Y.
Posted by Dylan Foley at 10:10 PM