Q&A: Daphne Beal on "In The Land of No Right Angles" 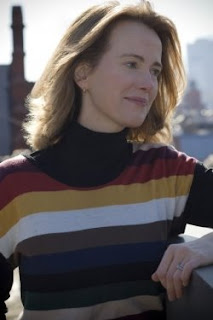 In Daphne Beal’s enthralling debut novel In The Land of No Right Angles(Anchor, $14), Alex is a 20-year-old American woman spending a year in Nepal. At the request of her former teacher Will, she helps a Nepalese girl named Maya escape from her bleak village in the mountains to the opportunities and dangers of Katmandu.

Alex, Maya and older Will quickly form a strange romantic triangle that spans almost a decade. The spirited Maya and the more cautious Alex become like sisters, but their troubled, symbiotic relationship can’t bridge the cultural divide. When Alex returns to America to become a photographer, Maya begins a slow descent into of life of sex for survival, then full-fledged prostitution in the grim Falkland Road red light area of Bombay, India, where more than 100,000 Nepalese prostitutes ply their trade. Alex goes to Bombay to try to save Maya, but saving her is more complex than it appears.

Beal, 38, was raised in Wisconsin and educated at Brown and New York universities. She lives with her husband, the writer Sean Wilsey, and their two children in New York City. Beal spoke with freelance writer Dylan Foley at a cafe near her home.

Q. How did you create the character of Maya?

A. Maya is an amalgam of more than three different people I knew. When I was in Nepal in 1990, I was 20, and felt incredibly lucky to be there and wanted to disappear into the place. I met people trekking and in Katmandu. I was 20, and the women I met were 20. For Nepalese women in their twenties, making their way on their own was very tough. They were street smart, but had no education.

When I got back to the U.S., I became aware of the trafficking issue. Nepal’s economy was in shambles, so people told me that of course, women were “choosing” to go to Bombay’s red light districts. I became interested in what free will and choice for these women really meant.

Q. What interested you in the relationship triangle between Will, Alex and Maya?

A. Relationships are so much about power, and when you have three people in that situation, you watch things go boing, boing, boing. There are different kinds of power--economic, sexual and intellectual power. There is so much to play with.

Q. Alex helps Maya escape from her village. Were you involved in such a situation?

A. I really did know a woman who was desperate to escape her village. We left under very similar circumstances, but I did not deliver her into prostitution. I am grateful this is a novel, not a memoir. Later, I realized how hard this woman’s life was in Katmandu. I watched her life disintegrate.
For me, the novel is a story about a friendship in your twenties. This kind of friendship is almost like romantic love. At times, there is a twining that goes on--you laugh like each other, you dress like each other. It may be the friendship between a Nepalese and an American woman, but there are reverberations for other friendships. What is it that you need from a friendship?

Q. With her can-do American attitude, Alex tries to save Maya from prostitution in India. Why?

A. It is a very common impulse for Americans traveling abroad. In Katmandu, it can be, “I’ll sponsor your child through high school.” In Bombay, people would adopt street children and take them home to Detroit. It is not a bad impulse, but it has complicated repercussions.
If I could rewrite Maya’s ending, I would choose to have her be saved. I would choose to have her go back to Katmandu and become an amazing trekking guide.

Q. You spent six weeks on Falkland Road doing research. What was it like?

A. The thing that I got over pretty quickly was any feeling of anger towards the male clients. There was a level of tenderness. Everyone was so vulnerable. It’s weird being a woman interested in prostitution. People are like, why do you care? I became friendly with three Nepalese women in Bombay. They were beyond the shame stage of prostitution. What they did was not the only part of their identity. Somebody somewhere will accuse me of voyeurism, but it wasn’t a voyeuristic thing. In my novel, I am trying to understand how fluid the boundaries of sex, romance and money are, as well as what role survival and happiness play.
Posted by Dylan Foley at 6:31 PM