Gary Shteyngart on the Fall of America 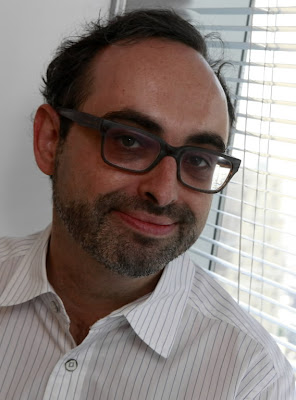 In an America in the not-too-distant future, the country is under a de facto dictatorship, is coasting into civil war and may be bought by the Chinese and Norwegians. While cities burn, elderly men are obsessed with eternal youth and everyone’s health and credit scores can be accessed at all times. Welcome to the brilliantly comic dystopian nightmare of Gary Shteyngart’s new novel “Super Sad True Love Story”(Random House, $26), where the youth of America shop as the tanks roll down their streets.

The protagonist of the novel is Lenny Abramov, a neurotic man on the cusp of 40, obsessed with the gorgeous and depressed Eunice, a young Korean-American woman. Lenny works for a life-extending company that targets High Net Worth Individuals. Full of ominous corporations tied to armies-for-hire and an incompetent Joe Lieberman-esque defense secretary prosecuting a ruinous war in Venezuela, Shteyngart’s novel is a satirical masterpiece which makes the reader shudder, how close are we really to the edge of the abyss?

Shteyngart, 38, is the author of the bestsellers “The Russian Debutante’s Handbook” and Absurdistan,” and met with freelance writer Dylan Foley at a cafe in Manhattan.

Q. What are your dystopian influences on the new book?

A. I think of it more like Orwell’s “1984” than Huxley’s “A Brave New World.” The reason people are taking this book to heart is that it is set here, not in some country I made up. The Walmarts are burning. I already felt like I was living in a dystopian world. When you are an immigrant like I am, you are already living in a cute little dystopian world of your own making.

Q. The whole world is obsessed with their apparats, a handheld device that offers Facebook-like information taken to an extreme, disseminating people’s health data, credit ratings and sexually transmitted diseases. What interested you in this rankings obsession?

A. Now it’s numbers, numbers all the time. We live at the razor’s edge with credit. You read stuff about my looks online and people parse my problems, or publish how much my old apartment sold for. Everything is ranked. Are we so far from the idea that you walk into a bar and are immediately ranked the 23rd ugliest man in the bar? If your girlfriend is the third-hottest in the bar, that will raise your rankings.

Q. How did Lenny evolve for you?

A. I decided to take away a lot of the bells and whistles of my earlier characters. I wanted to make him recognizable to people and a lot of that involved stripping away his ethnicity. Being Russian is just one of his burdens. Lenny’s problems are much deeper. He’s 39 and he’s coming to terms with mortality, as well as the fact that he’s unattractive and that his life won’t be getting much better than it is now.

Q. Why are you and Lenny obsessed with Korean women, like his girlfriend Eunice?

A. One reason I am so interested in Koreans as characters is that it is a small, concentrated country. It is not 300 million Russians. Like the espresso I am drinking now, which is strong and pure, the tragedy of the Koreans is strong and pure. Eunice has been living under the weight of everything that happened to her parents. Eunice also grew up in Southern California, so she’s tragic and spoiled at the same time. Her shopping leavens the tragedy, especially the fact that her father is abusive to her.

Q. In your novel, America is under a dictatorship. Why?

A. The point I was trying to make is that society has been corroded. There is information overload, but a dearth of real information. Everything is just a tweet: “They are killing people in Central Park! Oh, I need to buy new clothes.” (Dictatorship) is the next step--we’ve already surrendered our privacy online and elsewhere.
Posted by Dylan Foley at 8:05 PM