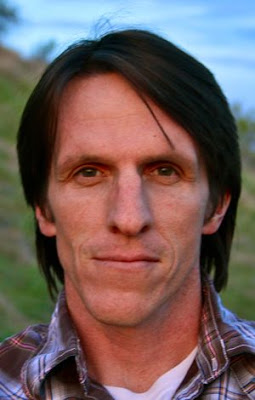 In his sweepingly beautiful novel “The Lonely Polygamist” (W.W. Norton, $27), the writer Brady Udall explores the many problems of Golden Richards, a Mormon polygamist living in 1970s Utah with four wives, 28 children and a failing contracting business. Golden also has the misfortune of falling in love with a violent client’s wife, endangering himself and his family.

The book is a darkly comic work laced with tragedy. Golden’s life is a mixture of a warped “Father Knows Best” and “King Lear” at the same time, where the patriarch is deluged with requests to unclog toilets, give time to unhappy wives and provide for his family. Golden Richards comes off as an extremely sympathetic character, doing the best he can, facing death and dealing with his overpowering responsibilities.

Udall, 40, lives in Idaho, teaches at Boise State and is the author of a previous novel and a short-story collection. Udall spoke with freelance writer Dylan Foley by phone from Philadelphia.

Q. Why did you write an epic novel about polygamy?

A. I am descended from polygamists, though I was raised in a nonpolygamist household. My great-great-grandmother was my great-great-grandfather’s second wife. Without polygamy, I am not here. I was asked to do this Esquire piece in 1998. They wanted to have me write about my religious background as a Mormon, but it was more interesting to write about polygamy in a modern context. I found it to be a fascinating and vibrant subculture, and something that hadn’t been written about in fiction.

Q. Why do polygamist Mormon families live “the Principle,” adding new wives, which some families can barely afford?

A. It’s an almost ironic way of punishing oneself, learning to live in a very difficult way, where this sanctifies you and makes you better. The polygamists, both wives and husbands, learn to be more God-like by taking on more responsibility. It’s very American--if we have problems, we add more land, more assets.

Q. How did Golden Richards come to you through seven years of writing?

A. I wanted someone who grew up outside “the Principle,” who wasn’t prepared for the responsibilities and obligations. I saw him as the quintessential American dad. We are all unprepared to take on the responsibility of fatherhood, but multiply his problems by six or seven times.

Q. How would you describe your novel?

A. It is equally dark and comic. One of the tasks I set for myself was making the novel extremely comic and extremely tragic at the same time, pushing the limits of that. Even in the most heart-wrenching moments, like the funeral of a child in the book, you have to be ready to look for that comic moment. Humor and comedy give perspective to everything. I have little use for books without comedy.

Q. With four wives and 28 children, how can Golden be lonely?

A. In his situation, his wives live in three separate houses and not one of them belongs to him in a real way. He goes among these houses like a traveling salesman, leaving no trace. He’s the figurehead, the patriarch, but has no safe place.

Q. The death of Golden’s daughter Glory still devastates him three years later. What role does the grief play?

A. It’s the driving force of the novel, which is the grief parents face when they lose a child. For me as a father of four, it’s playing out my own fears in fiction. Literature is a safe place to face the death of a child, where the reader can make sense of it in an intimate way.

Q. At the end of your novel, what is the meaning of a happy family?

A. It is a hard question, but a worthy one. “Happy” is a relative thing. In the end, I think, all that you can hope for in a family is that you can rely on each other.

This interview ran in the Newark Star-Ledger in June 2010.
Posted by Dylan Foley at 5:35 AM