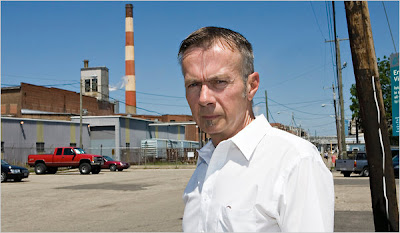 Stories Set in a Hard-Luck Ohio Hamlet
Donald Ray Pollock’s grimly hysterical debut story collection “Knockemstiff”(Doubleday, $23) follows the drinkers, the speed freaks, the down-and-outs and the whores of a hamlet in southern Ohio.

In Knockemstiff, the good citizens drink too much, indulge in steroids, smoke reefer and have hazardous, soulless sex in the backs of cars for the price of several amphetamine pills. The stories in this lively collection are all set in the “holler,” or hollow, of this impoverished village. In the title story, a clerk in a dead-end convenience store job muses over his stunted life as his unrequited love, the town fast girl, moves to Texas. In “Holler,” a man moves in with a local crackhead and cares for her paralyzed veteran father, giving him cheap wine to drown out his wartime nightmares. In “Blessed,” a failed burglar realizes his young son only pretends to be deaf around him. For the residents of Knockemstiff, the relationships are disposable, the criminals are petty and the thrills are short lived.

Pollock was raised in Knockemstiff, Ohio. For 32 years, he worked at a paper mill before he joined the MFA program in writing at Ohio State University. He is married with a daughter and two grandchildren. Pollock spoke with freelance writer Dylan Foley by telephone from his home in Chillicothe, Ohio.

Q. What drew you to the down-and-outs of Knockemstiff?

A. As far as my interest in the down-and-outers, it’s what I gravitate to when I read myself. When I was finishing the book, somebody suggested that I put a happy story in there. I felt by that time that I would seem sort of out of place. I wound up focusing on the alcoholics and the addicted. Not everybody in Knockemstiff lived those lives. There were a lot of poor people in Knockemstiff when I was growing up, but some people like my Dad worked at the paper mill. He had a pretty decent job, and there were others that worked at the atomic plant, the VA hospital or the prison.

Q. Most of your characters were directly affected by poverty and the destructive use of sex and drugs. Were these fragments of things that you had seen or people that you knew?

A. Probably a little of both. Drinking and drugs were something that I knew from my own life. I graduated from drinking to reefer and speed. With people being trapped and all that, I knew that feeling myself. Even though I worked at the paper mill and it paid pretty good money, for a lot of years I felt pretty stuck. I know a lot of people who are like that. They are in a job that they don’t like but it pays the bills. They wish they were doing something else, but they don’t ever make that move. They may not be living the gritty life in Knockemstiff, but they are pretty dissatisfied.

Q. How did the town Knockemstiff get it’s name?

A. There are several legends on what the town’s name is based on, but there’s one that I heard when I was growing up and it stuck in my mind. The story goes that outside of a church on Sunday, the preacher heard two women fighting over one of them’s husband. One said she was going to “knock the other one stiff.”

Q. A character named Bobby appears in three stories. He starts as a seven-year-old watching his alcoholic father savagely beat a man. At the end, he is a recovering alcoholic himself in his late thirties, being taunted by his dying father. Do you think Bobby will stay on the wagon?

A. I manage to end the book, not necessarily with hope, but with the possibility that Bobby will get straightened out, if he can keep off the booze and probably stay away from some of his family. A lot of people, not just poor people, have resistance when they see family member joining a recovery group and they are still using. If their relative is in recovery, they must have a problem.

Q. After 32 years at the paper mill, did you find the Ohio State MFA program and the New York literary world a culture shock?

A. For me, in the last few years, I’ve lived a pretty good life. I screwed up a lot until I was in my thirties. Then I cleaned up and lived a pretty good life. I’m still trying to get used to this. I’d been to college because the mill paid for classes, so the MFA program wasn’t much of a surprise. I was never expecting anyone to pay any attention to my book. I’ve seen some really good books get published, then disappear. That’s just the way it is. I was expecting this to happen to my book. I thought if I could just publish a book, I’d get a job after I got out of the MFA program. I’m pretty sure success hasn’t changed me. I’m happy living where I live.
(Originally published in the Newark Star-Ledger in April 2008)