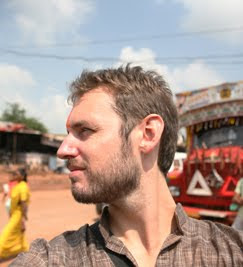 In his debut nonfiction book The Red Market: On the Trail of the World’s Organ Brokers, Bone Thieves, Blood Farmers and Child Traffickers(Morrow, $26) the journalist Scott Carney plunges into the world of grave robbers, baby thieves and international sellers of human eggs and kidneys to explore how human bodies and body parts have been turned into profitable commodities.

In his fascinating and macabre book, Carney goes to West Bengal, India where seemingly few graves are left unrobbed and skeletons are provided to medical schools in the United States and Europe. He doggedly tracks the case of a 2-year-old boy snatched out of an Indian slum and sold into adoption, winding up in a home in Wisconsin. Carney travels to a clinic in Cyprus where the eggs of Ukrainian beauties are harvested for European and Israeli in vitro fertilization. He finds a village of tsunami refugees on the east coast on India, where most adult women have given up a kidney for their family’s survival. In his vivid prose, Carney exposes the mostly exploitative and usually illegal red markets that are built on the backs of the world’s poor.

Carney, 33, worked and reported from India for a decade and is now a contributing editor to Wired Magazine. He spoke with freelance writer Dylan Foley via Skype from his home in Long Beach, California.

Q. How would you define the “red markets”?

A. Red markets are what happens when we commercialize the human body. There is a certain hypocrisy with what we are doing. We say we are we are “donating” body parts like kidneys, not selling them. Red markets are different because the transactions never really end. When you buy a body part, you are indebted to an individual who may have literally saved your life.

Q. How did the chapter on bone trafficking evolve?

A. That was one of the first articles I did, in 2007. I wanted to know if bone trafficking was really going on. I spoke to bone dealers and a cemetery guard. My sense of fascination outweighed my sense of the macabre.

Q. Your child theft story in India that resulted in an American adoption was upsetting. How did the American authorities and the adoptive family respond?

A. This story was the hardest to report. I actually felt a sense of duty to the Indian family and I still do. That child, taken from Chennai, may have a materially better life in America, but does that give Americans the right to kidnap children from poorer parts of the world? Once we notified Child Protective Services in Wisconsin and the FBI, they were like, “That’s terrible, but it’s already happened.” Since my article appeared in Mother Jones, there has been a DNA test (under FBI jurisdiction) that was a proof-positive match. The child is the one that was kidnapped. Nothing has happened. The adoptive parents keep willfully denying they are complicit in this crime.

Q. What was the situation in “Kidneyville,” where tsunami refugees in India’s Tamil Nadu province were half-swindled for their kidneys?

A. We are using money as a moral force, to create ownership over someone else’s body. Because someone is poor in India, their kidney is a last-ditch safety net. The rich in India see their money as giving them the right to get that kidney. What moral landscape gives an old, dying rich person the right to a young person’s kidney?

Q. Your last chapter is how Indian hair is harvested, from religious rituals to garbage picking, making hair extensions and food additives for the West. Why did you cover hair?

A. I went into the story looking for the ethical problem, but this is a situation where people have their heads shaved for religious reasons, giving away their hair for altruistic purposes. It cannot be duplicated in the other markets I’ve covered. In India, there is no altruistic kidney giving.