Q&A: Dave Isay on "Listening is an Act of Love" 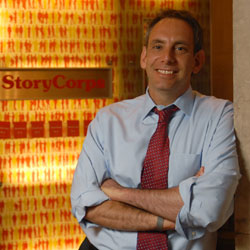 In 2003, radio producer Dave Isay and a group of six people set up StoryCorps, a nonprofit with the lofty goal of recording the life histories of hundreds of thousands, if not millions, of ordinary Americans. A radio booth was built and opened in Grand Central Terminal in New York City. The premise was simple: two people would go into the booth with a facilitator, and one person would interview the other for 40 minutes. The interviewee would be given a CD of the interview, and another copy would be archived at the Library of Congress.

Isay and his crew have struck audio gold. In the four years the project has been in existence, booths at Grand Central and Ground Zero, as well as a two mobile recording booths, have captured 14,000 interviews from people around the country. The booths have captured survivors from the World Trade Center attacks, veterans of the civil rights movement, children of the Depression, homeless people, cancer patients and many more.

In his new book, Listening Is an Act of Love: A Celebration of American Life from the StoryCorps (Penguin Press, $25), Isay has edited and presented 50 interviews of great magnitude and grace. From an American veteran who cannot let go of the ghost of a 14-year-old Hitler Youth soldier he killed in Europe in combat to a young man expressing the love he feels for his grandmother who saved him from horrible child abuse, the stories are vivid and riveting. They cover love, death, forgiveness, hope and other aspects of the human condition. From a father accepting the loss of his 10-year-old son to an alcoholic desperately trying to stay clean and a depressed missionary in Los Angeles accepting kindness from a street prostitute, the stories form a history of America as it is now.


Isay, 41, was raised in New York City and educated at New York University. By his early thirties, Isay had become one of America’s most prominent radio documentarians, from his shows “Ghetto Life 101” to “The Sunshine Hotel,” which chronicled one of the last Bowery flophouses. He is the author of “Our America” and “Flophouse” and is married to the investigative reporter Jennifer Gonnerman. Isay spoke with freelance writer Dylan Foley at the StoryCorps offices in Brooklyn.

Q. What inspired the StoryCorps project?

A. I’ve been a radio documentary producer for about 20 years. StoryCorps came out of that work. I did a documentary 15 years ago with these two kids in the projects of Chicago. I gave them tape recorders and had them record their daily lives. It became “Ghetto Life 101,” which was the first nationally broadcast citizen-recorded documentary. The microphone gave LeAlan and Lloyd the license to ask people the questions they’d never asked before. In many ways, “Ghetto Life 101” was the beginning of StoryCorps.

Documentaries have traditionally been about creating this work of art or this educational piece that benefits a lot of people in its playing or broadcast. StoryCorps turns this on its head. It is really about changing people’s lives by giving them a chance to participate. We live in this culture where we are surrounded by so many computer screens and Blackberries. StoryCorps is about turning off the screens and looking each other in the eyes. This project is really about taking time out to remember what is important in life, that the stories of the people around us, our families and friends, the people on the subway near us, are valuable and important. It tells people that they matter. These stories make me want to get up in the morning, and remind me how precious it is to be alive.

With “Flophouse,” I’ll never forget the experience of bringing the galley of the book into the flophouse, and one of the guys started dancing through the halls, shouting “I exist, I exist.”

Q. You have set StoryCorps up as a self-perpetuating, money-losing organization. How?

A. StoryCorps is a crazy idea. Each interview cost $250 to make. We give it to you for $10. If you have no money, you get it for free. We lose $240 an hour in every booth We give new meaning to the word nonprofit. We have 14,000 interviews now. There will be many more than that. We are trying to turn this into an American institution and a social movement. For us, StoryCorps is about the experience of the booth, about two people who care about each other, to look somebody in the eye and to tell them you love them by listening. The mission of StoryCorps is to honor and celebrate people’s lives by listening

Q. Did you have any difficulties in the first several years?

A. When we launched the project, it was a very simple idea, but it didn’t fit into any foundation’s (grant-giving) guidelines. Nobody had tried to do anything like this before. When we got about three months into the project, we were within several weeks of running out of money, laying everyone off and closing the project down. At the same time, it was extraordinarily successful. I could see it was working. I’m like a junkyard dog. There was no way I was going to let this thing die. A couple of individual donors stepped up and gave us enough money to get back on our feet, so I could find some foundations to support us. The first 18 months were rough.

There is no fat at StoryCorps. We are trying to build a foundation on which we can grow into a national institution. Everybody who participates in StoryCorps becomes a StoryCorps alumni. We have roughly 30,000 alumni. This organization started with seven people and a budget of $500,000. Four years later, we are now 80 people and have a budget of $6 million. When we have millions of alumni, we hope that there will be some donations ot sustain us, to see to our mission, which is to make StoryCorps accessible to everyone. I’ve done some obscure projects, but this book is all about StoryCorps getting a foothold in mainstream society. I have my fingers crossed.

Q. How did you choose and edit down the 50 stories?

A. A couple of thousand stories were transcribed. What I’ve always tried to do as a radio producer was to be the vehicle through which people tell the story, their stories the way they want them told. It’s about taking something and shaping it, honing it so it becomes the essence of what people are saying in the booth, and the poetry of what people are talking about.

Q. Have you had any “Jerry Springer” moments in the booth?

A. We haven’t, knock on wood. It’s almost like there has been a protective glow around the project. Anything can go wrong, but nothing has with 14,000 interviews. That’s because we take it seriously and the participants take it seriously. People travel hundreds of miles to go to the StoryCorps booths. It takes courage. With the 9-11 stories, we see firefighters who have not been to therapy telling their stories. It is not self-indulgent. They see it as leaving their story for posterity, for future generations. This idea of many voices painting the picture of what we are becoming as a nation, this important historical record, is enough to force some people into the booth.
Posted by Dylan Foley at 9:31 PM

Labels: Dave Isay, Listening is an Act of Love, StoryCorps