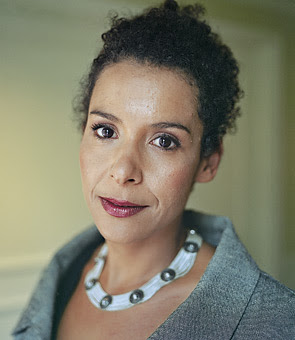 This was a strange book--one clearly thrown together to raise money for Mariane Pearl, Danny Pearl's widow. There was the gripping part at the beginning, the hunt for Danny Pearl's kidnappers and her efforts to get the journalist back alive, though the book petered out quickly. Though Mariane Pearl is a journalist herself, there are all these fawning letters in the back of the book denouncing terrorism, including an horrific letter from Vladimir Putin, at the same time as he was orchestrating the 2nd major slaughter of the people of Chechnya. What can you do?
Here is our interview:

Immediately after Pearl's abduction, his French journalist wife, Mariane, at the time six months pregnant, worked aggressively with a journalist friend, the Pakistani counterterrorism division and American diplomats to fight for her husband's release. Mariane Pearl's offbeat team secured vital information that helped lead to the arrest of his kidnappers, but Danny Pearl's death was confirmed five weeks later when a grisly video of his murder and decapitation was released by his killers.

Mariane Pearl's short nonfiction work, "A Mighty Heart: The Brave Life and Death of My Husband Danny Pearl" (Scribner, 279 pages, $25), co-authored with former Newsweek editor Sarah Crichton, has just been published. The book details the grueling period when Mariane struggled with her comrades to save Danny Pearl's life. They had to plunge into the snake pit of Pakistani politics, where the ISI, the Pakistani secret service, may have had ties to Al Qaeda and her husband's kidnappers.

"The book was for Adam, of course," said Mariane Pearl during an interview in her publisher's office in New York City. Adam is Pearl's 15-month-old child who was born three months after his father's murder. "If I didn't write this book, maybe Adam would grow up in fear of everything that killed his father."

"A Mighty Heart" reads like a thriller, where the horrific end is known in advance. Mariane Pearl writes with raw emotion about her desperate efforts to save Danny and the horrible waiting game. She criticizes the Journal for sending its unprotected reporters on dangerous assignments and the media feeding frenzy after the kidnapping.

At the time of his murder, Danny was the Journal's South Asian bureau chief, based in Bombay, India. Mariane was a radio journalist and free-lance writer for a French magazine. They were both on assignment in Pakistan when he was abducted.

Hours after he disappeared, Mariane Pearl sprang into action with her friend Asra, another journalist.

"We trusted nobody more than ourselves," explained Pearl. "In Pakistan, you don't really know who to turn to. We had no time for bureaucracy. I knew that if someone was going to give everything finding Danny, it was going to be me."

In the space of two days, Pearl had cobbled together a quirky, sophisticated team to find her husband. The team included a man she nicknamed the Captain, who was the head of Pakistani counterterrorism; John Bussey, Danny's editor at the Journal, and a ninja-like American diplomat.

"We were all different characters, but what was remarkable was that people understood and agreed that what mattered was to save Danny," said Pearl. "Danny was an innocent man in the hands of people who were extremely dangerous and extremely evil."

Along the way, the team broke down international tensions as they searched for Danny. "We were able to provide this energy around us," she said, "which means the normal barriers that would come up between Americans and Pakistanis, journalists and cops, were erased."

One of the most compelling characters in the book is Captain, a dapper man capable of great compassion but not afraid to rough up suspects. At one point, to force one of Danny Pearl's kidnappers to surrender, he literally takes the man's family hostage.

"The Captain, the minute I saw him, I knew he was a man of honor," said Pearl. "He wanted to fight these jihadis, because he hated them. He'd seen a lot of people die because of their deeds."

During the brutal five weeks of waiting after her husband's kidnapping, Pearl held herself together by sheer willpower. "I knew right away what we were facing - it was Al Qaeda," she said. "My enemies were powerful, so I needed to be powerful. I couldn't collapse, the way Danny couldn't collapse. The terrorists wanted to create fear in you, and I really fought that."

At one point in her book, Pearl reveals that the Pakistani secret service, the ISI, was hiding the main kidnapper Omar Sheikh, showing collusion with the terrorists at the highest level of the Pakistani government.

"It was unbelievable," said Pearl. "It was at the same time that (Pakistani) President Musharraf was meeting with President Bush in the United States. They kept (Sheikh) for the five days the presidents were together. It gives you insight into the magnitude and the power of people and also the complete sense they can do whatever they want."

Though a member of the press herself, she marveled at the media feeding frenzy over her story. "The media is the media," said Pearl, with resignation. "They are not very subtle all the time. All of a sudden, your life has blown up, and they want that story. There was something obscene in being the first to get the story."

At one point, Pearl has a confrontation with CBS News president Andrew Hayward over his decision to air the video of Danny Pearl's murder. Hayward gave the weak answer the video had news value. Pearl saw running the video as playing into the terrorists hands.

"The terrorists did the video for a purpose," said Pearl, "and that purpose was what it did - to have American channels and the Internet broadcast it. The appetite for shocking news and images, something to retain viewers' attention, it is more than just a game. It has consequences."

After her husband's murder, Mariane left her native Paris and moved to New York for a new start. She has resolved to fight bitterness over Danny's murder. "I have Adam," she said. "He is a smiley baby. He's our victory, in a way. He is something that you cannot invent or pretend.

``Even if you stay alive, these terrorists want to kill you," noted Pearl. ``They want to kill the dialogue and initiative. All those things, I will do. Danny was the same. I know that till the end of his life, Danny did not bow his head. I did the same."
Posted by Dylan Foley at 7:26 PM