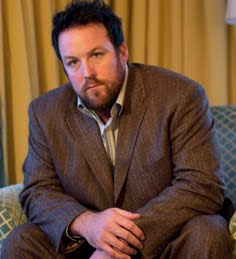 During the 1991 Gulf War, Anthony Swofford was a 20-year-old Marine with an elite sniper/scout unit. His new memoir, "Jarhead," chronicles the boredom and insanity of the thousands of young men and women waiting in the desert in Saudi Arabia for a ground war that wound up lasting only a week.

"We were hyped up when we landed in Saudi Arabia," said Swofford about the fall of 1990, when he arrived with the Marines for Desert Shield. "We were effectively speed bumps in the desert for heavy Iraqi tanks. We were light infantry in defensive positions, with some rifles and Humvees. Then we realized we were in a waiting game."

Jarhead is sarcastic Marine slang for the appearance of their high-and-tight haircuts. Because of the recent war in Iraq, the 33-year-old Swofford's "Jarhead" has become a national best seller. It is much more than the right book at the right time, though. Swofford has written a memoir that will become a classic of the first Gulf War, exploring what it meant to be a young soldier in that conflict - the impatience, the dysfunction and the cynicism that the war might have been fought for oil, not democracy.

"'Jarhead' is a young man's view of war and warfare, of military life and Marine Corps life," said Swofford in an interview from New York City, where he was on a book tour. "Its narrative is personal and close, but it is not a polemic or diatribe."

Swofford was an Air Force brat who was raised around the U.S. and Japan. His father served in Vietnam and his grandfather was in World War II. He was 14 when the Marine barracks was blown up in Lebanon. Swofford wanted to be a Marine.

After a brutal training regimen, Swofford was handpicked to be a member of the elite sniper/scout platoon. He and his comrades were obsessed with the "pink mist," the effect of the perfect shot to an enemy's head.

The memoir follows the absurdities of military life and the intense boredom of the waiting in Saudi Arabia. On the front line, waiting for the assault on the Iraqi army to start, showers were rare and the men started becoming weird. "You are going to start snapping in little ways," said Swofford. "I called the sniper platoon a dysfunctional family."

One sniper he knew started shooting camels in the head for practice. "He was psychotic," said Swofford matter-of-factly. "His self-image was of a hungry, crazy killer. He was dangerous to others, a hyper-Marine in the stereotypical sense, the guy who busts up a bar every weekend." Justice for the camel-killing Marine was quick and appropriate. "They took him off the line. His fate was handing out toilet paper, and he got the nickname Huggies."

When the ground war came, it was too quick for the battle-hungry Marines. Swofford's team picked out an Iraqi artillery observation post for destruction, but a Marine officer pulled rank on him and called in the destruction of the post himself.

In a chilling, surreal scene in the book, Swofford and his platoon are traveling into bomb-scarred Kuwait, through the burned-out tanks and dead Iraqi soldiers, the results of the air war. At night, he went over a hill to urinate and encountered a circle of dead Iraqi soldiers, frozen in death around their campfire. Swofford joined the circle, having a bizarre conversation with the dead. "I felt fascination and exhilaration," admitted Swofford. "I wanted to get closer to death."

On the last day of combat in the war, he had an Iraqi officer at a Kuwait airport in the sights of his sniper rifle. A commanding officer told him not to fire, denying him the kill. " It was the feeling of being robbed and not really performing," said Swofford. "I didn't pull the trigger. That's what I was trained to do. I am relieved that I didn't kill that man now, but there were many years when I wasn't."

Swofford left the Marine Corps 18 months after the Gulf War. He finished college and a master's degree. He was teaching at a college in Portland, Ore., where he lives. Writing "Jarhead" allowed him to address the experience. "I don't know if there was a cathartic element to the book," he said. "When I started writing the book at 30 years of age, I didn't understand the 20-year-old Swofford. I understand him now, and I even forgive him. In that way, I've put that 20-year-old to bed.

"I am not going to write 'Jarhead II,"' said Swofford. "I may never touch the Gulf War again. I will probably not touch my Marine Corps experience again, certainly not in nonfiction."

The second Gulf War, however, brought back some military longings. "I was a Marine, I was a jarhead," he said. "When I read accounts of men fighting now, there are parts of me that still want to be there. Not because I believe in the war, but I remember the men and how I lived then. It was a time of being most alive."

In following the recent fighting, Swofford said he prefers the newspaper stories to the TV images. "I think the TV images that are offered and the narratives attached are too quick," he said. "Print slows things down and transfers the reader to something close to the reality of combat. TV footage doesn't do that. It loses the raw emotion of battle."

The scary thing about TV is how clean it makes war look, how easy. "The softening of combat through the television image is dangerous," said Swofford. "It can make war palatable and more acceptable."
Posted by Dylan Foley at 5:31 PM