David Grossman's "Be My Knife" 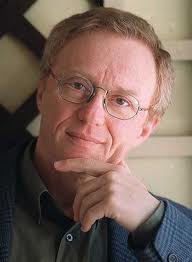 
In David Grossman's complex and absorbing new novel, "Be My Knife," Yair is a rare-books dealer who spies the striking Miriam at a school reunion in Jerusalem. Yair initiates a correspondence with her that becomes an obsessive affair, where they explore each other's souls. What is unique is that the lovers do not meet until the last page of the book.

Grossman is one of the most prominent modern Israeli novelists and essayists. His novels "See Under: Love" and "The Book of Intimate Grammar" explore themes of pain and love from Holocaust survivors to children in wartime. In "Be My Knife," Grossman writes a beautiful and searing book, where the married lovers, though they never touch, expose each other's desires and thwarted dreams.

Grossman does not write easy novels, and "Be My Knife" is no exception. It is a difficult and rewarding poetic novel that must be read in a quiet place. Grossman divides the novel into three parts - Yair's letters to Miriam, Miriam's journal after Yair cuts off contact with her and the lovers' devastating phone conversation during a deadly rainstorm.

Yair's letters take up the first two-thirds of the book. At points, readers can feel they are locked in a room with the mad hero of Rainer Maria Rilke's "The Notebooks of Malte Laurids Briggs." Like Rilke, Grossman writes with fervor about love and longing. "I swallowed your face that evening," Yair says of his first glimpse of Miriam. "You were branded into me and I knew your face by heart and by my heart in your mouth."

The first 100 pages of "Be My Knife" are a frustrating endeavor. Grossman's prose is bewitching, but there is virtually no action to grab onto. All the reader has to work with are Yair's letters, which are love poems to an idealized woman. He reveals more about the egocentric nature of his love than anything about Miriam.

Yair's pursuit of Miriam is unbalanced - he drives to her neighborhood in the middle of the night, strips his clothes off and runs circles around her house naked. He drops off love letters at the school where Miriam teaches, but refuses to meet her. Yair eventually moves from a philosophical view of love to his painful past - how his military father beat him and how he rejected his closest friend after he was mutilated during the war in Lebanon.

Grossman steps up the novel's force. Yair flees from Jerusalem to Tel Aviv to escape his young son's mumps. In a hotel where rooms are rented by the hour, anonymous couples have sex around him while Yair pastes Miriam's letters to the wall, furiously reading them. "Be My Knife" starts as a slow, lyrical work, but then draws the reader into Yair and Miriam's compulsions.

Miriam's diary shifts the focus of the book. Though she is obsessive like Yair, she is a much more stable person, taking care of her severely handicapped child. She finally discovers that Yair is a liar and emotionally unreliable. Miriam movingly meditates on her grief over falling in love with Yair, then losing him. She examines the loneliness that allowed a complete stranger to move her. Miriam describes an imaginary three-day meeting that she and Yair create. The fantasy is vivid and sensual.

Miriam quotes Kafka's line that names the novel: "Love is that you are my knife with which I dig deeply." Miriam fights this idea, but keeps peeling off her own layers.

After spending so much time in Yair and Miriam's minds, the reader becomes an accomplice to their love affair. Their intensity has become addictive.

The difficulties the reader may have in the first section of the book are rewarded by reaching the end. In the final section, Yair and Miriam's telephone call brings their illusions crashing down. In an effective, fragmented mix of conversation and thoughts that is framed by a crisis, the affair unravels. The final scenes shatter the fantasy of Yair's philosophical letters and Miriam's heartbreaking diary. The real world has finally intruded on their overpowering romance, with serious consequences.

In "Be My Knife," Grossman depicts a torrid affair between two fragile people without physical contact. Yair and Miriam strip off their inhibitions while holding onto certain lies. The lovers project their own desires and needs on each other's bare souls, creating a delusional romance. For Grossman, love is as an obsession, a consuming and searing mirage, where lovers reveal what is raw and painful.

Labels: Be My Knife, David Grossman