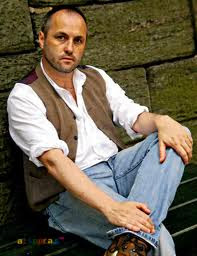 In his vivid new novel, "Dancer" (Metropolitan Books, 338 pages, $26), Colum McCann brings to life Rudolf Nureyev, the tortured Russian ballet dancer and Soviet defector who captivated the Western world with his physical art and his over-the-top lifestyle. By telling the story of Nureyev through more than a dozen narrators, McCann makes a gorgeous mosaic out of the life of the iconoclastic dancer.

"You go on this journey. This book was a risky thing for me to do," McCann said of the multiple narrators, which include Nureyev himself writing a fictional diary. "People who think they own Nureyev's memory are going to murder me on this."

The novel opens on the Eastern front in World War II, with the wholesale slaughter of Russian and German troops in battle. Nureyev first appears as a 6-year-old boy, dancing in a hospital ward full of amputees and other horribly mutilated soldiers in his frozen hometown of Ufa.

Nureyev's father is a political commissar, but the boy is mentored by political pariahs - a former ballet dancer and her gulag prisoner husband. Nureyev becomes a star of the Kirov Ballet, defects in 1961 and transforms himself into an international celebrity.

"I saw Nureyev's life as a history of the last 50 years of the 20th century," said McCann of the brilliant dancer, who died of AIDS in 1993, at the age of 54. "He was Russia's greatest capitalist. He lives the history of his country in advance. He was born in poverty, embraced art and turned his back on Russia, but he truly belonged only there. Nureyev lived a spectacular life and died of a terrible disease."

McCann is also the acclaimed author of two novels and two short-story collections. In "This Side of Brightness," McCann inhabited the mind of a homeless man living in the New York subways. With "Dancer," McCann has expanded his reach as a writer again. By playing with fictional characters in Nureyev's all-too-real life, McCann asks the question, who controls the memory of public figures?

For McCann, fiction allowed him to explore what history ignores - the human toll on Nureyev's family after he defected and how a dying Nureyev might have responded to visiting his father's grave on his only return visit to Russia.

"Fiction gets into the contradictions of the characters, the more silent moments," said McCann. "It is its blessing and its beauty, that it could get under Nureyev's skin."

McCann takes liberties with the historical record - he slashes Nureyev's three sisters into one, and invents characters. In a way, he destroys the clunky form of the historical novel to save it, to turn "Dancer" into a work of true literature.

Through his narrators, McCann draws a flesh-and-blood Nureyev. He captures the teacher who mentored him. He draws a heart-wrenching picture of his stoic sister, surviving with the KGB on her doorstep. McCann creates characters such as Victor, a South American hustler who becomes Nureyev's sexual competitor, or Yulia, an emotionally isolated Russian translator.

These seemingly peripheral people capture the spirit of Nureyev and the brutality of the Cold War. In the remains of a Stalinist killing ground, Yulia discovers some street hoodlums using a grisly soccer ball: "They kicked through the dirt until they found a white ball. I realized that it was a skull."

From the clipped prose of a stagnant Russia and its persecuted intellectuals in the 1960s to the amphetamine-fueled New York of the 1970s, McCann's prose changes like a mood ring, recording the different cultures and changing times through the rhythm of his words.

"I was quite conscious," said McCann, "that the book is about storytelling and language. The language of the 1970s was written in an extravagant and hyperextended way, where one sentence goes on for 30 pages. When you go to Russia, the language is tighter, colder and pared down."

For McCann, the book raised many questions. "How does language affect how we tell our stories?" he asked. "Where do we tell our stories from and who owns a life? Who owns Nureyev? Imagine for yourself, who would you want to write your life story?"

In the end, McCann said, it comes down to art. "I much prefer the fictional space, to write about things you supposedly don't know about. All this comes down to how we think about our lives and how we operate in the world, and how we create a work of art."

Nureyev changed in McCann's eyes as the book progressed. "I first thought he was an arrogant so-and-so," he said, "but I thought he might be a spectacular person to hang around with, the sort of person who'd take all the oxygen out of the air and make it his own."

Nureyev was renowned for smashing furniture, spitting on the press and trying to sleep with every man he found attractive. Despite this, said McCann, "there was something elemental, really human about him. I ended up liking him and I enjoyed his antics."

McCann delves into Nureyev's sexual passions. In a true story, during intermission at a performance at a London theater, Nureyev runs to a local public rest-room, where he gets arrested when he picks up an undercover cop.

McCann explores the decadence of New York society and its gay subculture that soon would be horribly pummeled by AIDS.

How did McCann, a married father of two small children, wind up writing accurately about the pre-AIDS gay New York? "I read about the gay bathhouses, I looked through books of pictures of New York in the 1970s, then I tried to forget them," he said, "to let them come through memory." Writing about the sex was a shock, he noted. "It surprised me," McCann said. "It was surprising to my mammy, too."
Posted by Dylan Foley at 11:05 AM