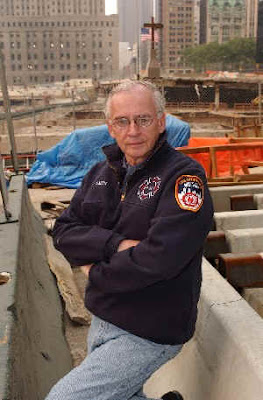 
One hour after the World Trade Center attacks on Sept. 11, writer Dennis Smith reported for duty at a Manhattan firehouse near his home. Smith, a retired firefighter, joined rescue efforts at ground zero. His new book, "Report From Ground Zero" is an overpowering document of devastation and heroism after the attack.

Smith's book focuses on the "first responders," the firefighters and police who rescued thousands on that day, but who lost 403 men and women. "The United States has had great tragedies, but we've never had an attack that was so brazen, so murderous, so evil," said Smith. "At the same time, in the middle of these attacks, we had 403 such extraordinarily brave people go into those buildings."

Smith's book is divided into two parts. The first is a wrenching oral history of Sept. 11, mostly told through the eyes of the firefighters and police at the World Trade Center. There is the chilling scene in the lobby of the buildings when New York fire companies flood in, take their orders from their chiefs and march upstairs. There are horrible tragedies, inspiring heroism and survival based on sheer luck.

The second half of the book is Smith's account of the first 90 days after the attack. His lyrical prose chronicles Manhattan after the apocalypse, where the financial district was covered in ash and smoke. He follows the efforts by the New York Fire Department, with its heart cut out, to rebuild itself. Smith records the courageous efforts by rescue workers at the World Trade Center site to save the few people they could, then to put out the fires.

In 1972, Smith was a 30-year-old fireman working in the South Bronx when his gritty memoir "Report From Engine Co. 82" was published. Smith reported on the grim situation of a firehouse in an impoverished area of New York City, where the men would fight as many as 40 fires a day. "Report from Engine Co. 82" has sold 2 million copies, becoming the firefighter's bible. He has written eight other books, including novels and memoirs.

In a coffeeshop in Manhattan, Smith discussed his new book. He admitted he had doubts he was going to write it. "I was not sure of a book's merit," he said. "A few days after that, I was truly convinced that these 403 names had to be in a book. My most important concern is that this book will be in a library for hundreds of years and people will have access to it."

Smith said that oral history was the only way to go. "The first part of the book had to be written this way," he said. "These stories have to be told by the principals."

Smith intentionally focused on the police and firemen. "I came out of a firefighting tradition," he explained. "I recognize that the World Trade Center was a much bigger story than this. There were 2,800 people dead. You cannot get to 2,800 stories. You can't get through 403 stories. You can only do your best and hope that this book will convey the courage and the sacrifice."

Smith follows the natural dramatic arc of the story and avoids the pitfalls of melodrama. He recounts the story of a battalion chief giving his lieutenant brother what would be fatal orders: "The fire has been reported,' says Chief Pfeifer, "on 78 and 80. Kevin nods, needing no further information, and then the two brothers lock eyes for a moment of shared and worried concern before Kevin leads his men to the stairs. Their names can be read on their bunker coats as they depart: PFEIFER, BOYLE, ARCE, MAYNARD, KING, EVANS."

What Smith does best is write about the firefighting. With much of the top fire brass wiped out, chaos reigned after the towers collapsed. In a matter of hours, though, the surviving chiefs had reorganized their firefighters and battled the blaze. Smith picked out the individuals, giving the book a riveting human edge.

"Look at Battalion Chief Tom Vallebuona," said Smith of one of the book's heroes. "He was terribly hurt in the 1978 Waldbaum fire, and here he finds himself buried in the World Trade Center. What did he do? He's a chief. There is no order, no command structure after the collapse. He says, "O.K. guys, we are going to find a fireboat, stretch hose and attack the fire at 90 West Street.' They did this with 20 firefighters," said Smith. "He was working it like a side street job."

Smith felt that many of the firefighters entering the World Trade Center knew they faced death. "I'm certain of that," he said. "Captain Terry Hatton said to a guy in the lobby of the building, "I don't know if I will ever see you again, but I want you to know that I love you.'" Hatton perished in the collapse. Smith details the early days of the recovery efforts. He records the grief and camaraderie on the site. What Smith does so beautifully in "Report From Ground Zero" is reach into the heart of the World Trade Center attacks. By focusing on the selfless heroism in response to murderous terrorism, Smith displays the moral center of the rescue workers, who reacted in a humane fashion to mass murder. There will be other books on Sept. 11, but it is doubtful they will come near Smith's personal and searing story of the cops and firefighters who gave their lives.

For the firefighters, retrieving their fallen brothers has been the main priority. "There is a big tradition in the 150-year history of the NYFD when somebody dies in the line of duty, to bring the body out as fast as you can," said Smith. By early March, roughly 800 bodies had been found. Of these, only 150 firefighters of the 343 killed had been recovered.

Some of Smith's old friends from the fire department had lost their own sons on Sept. 11. These are among the most heartbreaking parts of the book. "Chief Ed Schoales' son Tommy was found in February," he said, pausing to compose himself. "Eddie told me that, afterwards, it was easier to sleep at night."

The book deals with some controversies that erupted last fall. One was the emotional confrontation between police and firemen over retrieving bodies. "The No.1 issue was the recovery of the loved ones," said Smith firmly. "Look at this as a battlefield, and taking your dead and wounded from the battlefield. It was unavoidable."

Smith said it was an honor to work with the World Trade Center rescue workers. "I was inspired by the goodness of the human spirit - the volunteers, the ironworkers, and, of course, the firefighters."

(REPORT FROM GROUND ZERO: The Story of the Rescue Efforts at the World Trade Center By Dennis Smith, Viking, 366 pages, $24.95)