One of George Plimpton's Last Interviews on the Paris Review 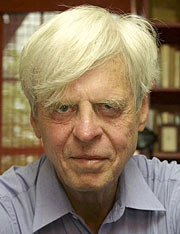 Writer and Paris Review editor George Plimpton died of a heart attack in his New York City apartment Sept. 25. He was 76. In a recent interview, Plimpton discussed the Paris Review anthology that celebrates the literary journal's 50th anniversary this year.

The Paris Review had its humble beginnings in 1953, when three young American writers in Paris - Peter Matthiessen, Plimpton and Harold L. Humes set up the magazine. The literary journal stood out because it published only fiction, poetry and the occasional interview with writers. The editors refused to publish literary criticism and, unlike the other journals, The Paris Review had an art director, and stood out with its vivid covers. E.M. Forster, the great British novelist, was one of the first writers interviewed.

In June, Plimpton published "The Paris Review Book of Heartbreak, Madness Sex, Love, Betrayal, Outsiders, Intoxication, War, Whimsy, Horrors, God, Death, Dinner, Baseball, Travels, The Art of Writing, and Everything Else in the World Since 1953" (Picador, 752 pages, $30). Behind that cumbersome title is a brilliant collection of fiction, poetry and interviews. There is fiction by Raymond Carver, Ha Jin and Lorrie Moore, and poetry by Adrienne Rich and Frank O'Hara. In the writer interviews, Truman Capote tells all, Toni Morrison discusses how to avoid writing boring sex scenes and William Faulkner talks about the writer's responsibility to art.

"I knew we had to do something this year, and I, of course, being a traditionalist, thought we'd do a 50th anniversary issue," said Plimpton in one of his last interviews from the study in his apartment overlooking the East River in New York City.

The Paris Review's twentysomething staff, however, had other ideas. They rebelled, for they wanted an anthology. "The staff thought that no one was going to go into a bookstore and pick out a 50th anniversary issue." Half in protest, he said, they devised the book's long-winded title."

Putting together the anthology was arduous work. "The editors went through Issue 1 of the Paris Review to Issue 160-whatever it is," Plimpton said. "I originally picked all the material, but not for the anthology. I'm terribly proud of them. The great joy was that they'd come to me with old material saying, 'What a story this is.' I remember reading Jay McInerney's beginning of his novel ("Bright Lights, Big City") in 1982 and saying 'In it goes."'

The Paris Review got its start in the heady days of post-war Paris. Plimpton, a young Harvard grad, had just finished his master's at Cambridge. "I went to Paris on Easter vacation in 1952 and bumped into Peter Matthiessen and Harold Humes. They talked about the magazine. I didn't know what I was going to do with my life then."

Plimpton moved to Paris. The financial help to start the magazine came from the three young men's parents. "The three families paid $500 each," noted Plimpton. "We didn't have it ourselves."

Paris in 1953 was a swirling cafe scene, a city packed with writers and artists. "It was exactly the kind of culture to start something like The Paris Review," said Plimpton." It was a petri dish. The G.I. Bill provided enough for you to live on, and Paris was inexpensive after the war. There was a whole raft of writers there - Richard Wright, Christopher Logue, Jimmy Baldwin. It was very vibrant, full of that élan."

The Paris Review went straight to writers, as opposed to writing about them. "The illustration I've used is rather than getting Critic A to write on Author B, we would go directly to Author B," said Plimpton.

The magazine scored a coup for its first issue with its interview with Forster, who had taught Plimpton at Cambridge. "He was a friend, because there was always that bond between student and don," Plimpton explained. "He hadn't finished a novel since 1924. He sat there and told us why - he had lost control of his characters. I think that set the tone for all the interviews that followed."

Over the last 50 years, The Paris Review interview has set the gold standard for literary interviews. "There were two things that happened," Plimpton said. "First, we were actually interested in the craft of writing, because we were writers ourselves. In the quintessential Paris Review interview, we'd ask, 'Do you use a pen or a typewriter?' We'd move on to inspiration and working hours. Nothing like this had been done before. Second, we made the writers part of the process. In almost all cases, we sent the interview back to the writer before publication. It was a collaborative effort.

The legions of writers who got their first big breaks through The Paris Review include Philip Roth, Jonathan Lethem and Jeffrey Eugenides. "We began publishing novellas like (Roth's) 'Goodbye Columbus.' People say that we discovered Philip Roth. Roth says that he was discovered by an obstetrician in Hoboken."

Over the years, Plimpton himself had become a symbol of the New York literary scene, with his patrician good looks and his trademark white hair. He wrote 30 books, including biographies of Edie Sedgewick and Truman Capote, and numerous anthologies on writing. He was also not above some good-natured self-satire - Plimpton mocked himself when he did a cameo on TV's "The Simpsons."

The journal has had rough times over the past 50 years. "The Paris Review came close to dying several times along the way," Plimpton said. "It was always financial. If it died, it would have killed part of me."

Things are very healthy now. "We started out with 5,000 subscribers," he said. "Now it is 15,000. The staff now is all in their 20s, which is great. They know a lot more than I do and they love the magazine. That's what makes it function."

For Plimpton, it was always about breaking new literary ground over making money. ``I work for nothing," Plimpton said. ``The only salvation to this job is when you read something that makes you jump out of your seat, like a recent story we published by Maile Meloy. That's enough."
Posted by Dylan Foley at 7:17 PM