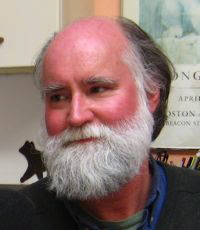 
In 1992, Nicholson Baker wrote the novel "Vox" about a phone-sex relationship between two characters, with nothing but two voices and a telephone. His racy book went on to become a national bestseller.

In his new novel "A Box of Matches" (Random House, 178 pages, $19.95), Baker returns to his minimalist roots, creating a story about Emmet, a 44-year-old textbook editor, who gets up every morning around 5 and makes a fire while his family sleeps. He drinks coffee and eats an apple, but like the simplicity of Henry David Thoreau's "Walden," a list of hardware is more than it seems.

Baker has created a work of simple beauty, where a flyer for the Sears Department Store leads him to a memory of buying boots as a child, and in the dark he thinks of when his wife first kissed him in college.

The book came about because Baker had no time. "I had started a nonprofit to save old newspapers and I found that I didn't have enough time to write," Baker said from his house in South Berwick, Maine. "I wanted to see if I could get more done by getting up early. Somehow, it turned into a book. The box of matches was the size of things. I wanted to find more in a little box than people might think was in there."

Each of the book's 32 chapters starts with a match as the narrator makes a fire out of old cereal boxes and junk mail as kindling. In the dark the man muses about the green light from the smoke detector, or the feel of the coffeemaker as he prepares a pot of coffee.

"I am used to having less to go on," he said. "In 'Vox,' I only had the telephone line. There is something useful to me about not having everything to work with, having something simple and repetitive, and groping around to do it. You build a fire out of the scraps of your life."

The 45-year-old Baker is a contributor to "The New Yorker," he has written the five novels and three works of nonfiction, including one on his John Updike obsession called "U and I." In talking about his new book, he avoided comparisons with Thoreau.

"I didn't think of 'Walden,' but did Thoreau get up every morning? I didn't use any models because I wanted this book to be truly heartfelt," he said. "I am sort of saying to the world, this is what I have: a man in the middle of his life. Things are going well for him, but has he done something with his life? There was an earnest feeling that drove the book rather than literary ambition."

In his career, Baker has moved on from the sexy novels like "Vox" and "The Fermata." "Every book colors a different part of life," said Baker.

"I didn't want to shirk the sex part of it, which is really interesting. After doing that for two books, I didn't want to spend my life writing about that because there are other things to write about."

The autobiographical parallels are clear - like the narrator, Baker has two kids and a wife, and lives in Maine.

"I wouldn't say it is 100 percent, because I have a different name," he said. "I would take a wild guess and say that it is 85 percent nonfiction. I wanted to see what I had to offer the world when I had just gotten up."

As the short chapters progress, Baker muses on the use of memory. The narrator talks about his grandfather, a pathologist, and remembers the period when his grandfather was going senile. He played Chopin on the piano while his wife lay in bed for two days with a broken back.

"The grandfather in the book was based closely on my grandfather," said Baker. "He was fascinated by disease and believed more autopsies was the answer for everything."

For Baker, memory comes in particles. "You remember little moments of distress and elation, and life collects around them," he said. "I use those granular moments of clarity, as opposed to using a plot."

The box of matches provided him with a simple structure and the repetition of the fire. "You can't write a book that is a jumble of memories," Baker said. "You have to have an organizing structure, and that is why there is the idea of doing the same thing every morning. Rather than starting from one moment, like having a guy on an escalator and everything coming from that moment, I had repeated the time of day and would see what came out of that."

In "A Box of Matches," not much happens - the narrator's wife doesn't leave him, his kids seem to like him and he doesn't get leprosy.

"It is difficult for me to write with a narrative arc, so I don't. I don't want to claim that you ought not to have one. Even if they call you a hack, I think every writer is giving what they've got.

"When I write nonfiction, I want to change the way that people think about things," he said. "I have some sort of zeal to convince people of things, to show them why things should change. There is a muckraking element."

His last book, "Double Fold," was a book about the destruction of American newspaper archives. It also turned him into an activist. Baker cashed in his retirement fund to start the nonprofit American Newspaper Repository so he could rescue 6,000 volumes of rare 20th century newspapers.

Baker doesn't see himself as a Mother Teresa or the Don Quixote of old American newspapers.

``Remind me of what Mother Teresa did? The thing about Don Quixote is I don't want to think of myself as eccentric to the point of futility," said Baker. ``It is important to keep one or two copies of (historical) American newspapers. It is just common sense," he said.