Art Spiegelman on His Brilliant "In the Shadow of No Towers" 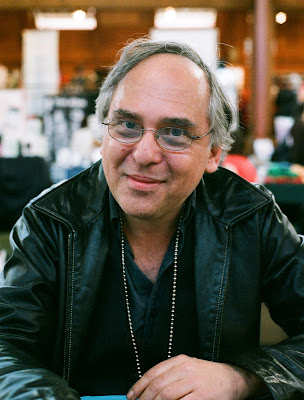 
On September 11th, 2001, New Yorker contributing artist Art Spiegelman was with his wife near their downtown Manhattan apartment when the first plane struck the World Trade Center. They rushed down to rescue their daughter from a school near the Twin Towers and were almost enveloped in the toxic white cloud when the towers fell.

In the aftermath of the destruction of the World Trade Center, Spiegelman created the haunting black-on-black New Yorker cover memorializing the fallen towers. He left the magazine to create a series of large illustrated panels chronicling the horrors of Sept. 11th, and what Spiegelman sees as a destructive American “war on terrorism” and a war in Iraq that is making America less safe. Prominent American newspapers and magazines refused the publish Spiegelman’s new comic work, so they were published in 2002 and 2003 in a newspaper called The Forward and in Europe. The resulting book, “In the Shadow of No Towers,” (Pantheon, $20), is a brilliant, chaotic work, where Spiegelman’s 24 large cardboard-backed panels take autobiographical events of Sept. 11th, and mixes them with satire of George W. Bush and Dick Cheney incorporated into the famous comic strips of the early 20th century like “The Katzenjammer Kids.” Bush is shown as a cowboy blithely leading an expedition over a cliff. He and Cheney also slash the throat of an American eagle. Witty and virulent, the new book shows there is no easy closure to Sept. 11th.

Spiegelman, 56, was born in Stockholm, raised in New York City and educated at Harper College. He won the Pulitzer Prize in 1992 for his graphic novel “Maus,” which told the story of his father’s survival of the Holocaust. From 1992 to 2001, Spiegelman’s controversial covers and artwork filled the New Yorker. He spoke with freelance writer Dylan Foley from his SoHo studio in lower Manhattan.

Q. How did your large panels on Sept. 11th develop?

A. What form the panels would take took six months of gestation, before I could start making pages. The pages didn’t appear in the press until the middle of 2002. After the attacks, many people turned to cultural artifacts for warmth. I’ve always loved comics, and after Sept. 11th, I learned to love them in new ways. What I found in these old large-scale Park Row comics, like “Bringing Up Father” and “The Katzenjammer Kids,” is that they were never meant to last. It was the same way with these pages. They were meant to last 24 hours, then to be used to wrap fish.

A. I did not leave the New Yorker in protest. I am crazy, but not that crazy. The New Yorker wasn’t the problem. It was a symptom. (Editor) David Remnick saw the pages I was working on, but did not ask me to reformat them for the magazine. Other magazines came by to see what I was working on and were repulsed by the smell. The new culture editor of the New York Times asked to see the pages. There wasn’t even the courtesy of a response. Fortunately, I have a friend who is an editor at Die Zeit, the German newspaper. Here was an editor that wanted to underscore the cowardice of the American media. I had the “coalition of the willing”---news magazines in France, Italy and Germany. In New York, I had The Forward (a small Jewish weekly). At The Forward, I got the “right of return.” I said to the editor, “These pages aren’t even about being Jewish.” He said, “It’s all right. You’re Jewish.”

Q. You became obsessed with drawing the skeleton of the Towers before they collapsed. How did this develop?

A. My wife Francoise, daughter Nadja and I saw from the (Hudson River) esplanade a glowing exoskeleton of the Tower, in the instant before it fell. it was almost like an “end of time image,” before collapsing into a toxic cloud. It became the main image that exists through repetition and distortion throughout these pages, the one image burned into my memory. It was so unreal and tangibly in front of my eyes. It was not an image I could find in any of the news images. I tried to paint it. I found that I could get pretty darn close to it through the miracles of computer generation.

The only thing I am really sure of is that the towers came down and a plane went into them. What I am not sure of is if there is a war in Iraq. The media reality of Sept. 11th was instrumentalized into the coming war recruiting poster, what replaced or hijacked what I saw on Sept. 11th. This is one of the stories traveling through these pages.

Q. Do you see this book as a polemic?

A. What’s a polemic? Just define that word for me and I’ll know what it means. I think reality went to extremes and some pages got made. I saw it as a provisional work. This isn’t in anyway the kind of work that “Maus” was. These pages were made to keep my mind and hand occupied while I was waiting for the world to end. As I came in for a mental landing, I began to wonder what to do with these pages. Was there enough to make a book?

Q. You often speak in the voices of the old comics, turning the Katzenjammer Kids into the horrific Tower Twins. Why?

A. It literally came from the large-sized canvas that I was able to work in. I was immediately brought into sympathy with those first large-scale comics that were born in New York in 1895. “The Katzenjammer Kids” were the first sense that I was going to be sucked in the maelstrom of the “newspaper row” comics. They were one of the first ongoing comics. The Katzenjammer kids were terrorists who were going to blow up the civilized world. The ghosts of the old Park Row comics (created in lower Manhattan) got rattled by the crashing down of the nearby towers, and started finding a way into my brain.

A. I am still at this tense moment when I have no more adrenaline to offer because it was used up a while ago. The political manipulators are saying, “Stay in Code Orange, Code Alert Orange. Be Very Afraid.” There are still more disasters to come, because the last three years have not been used to make us safer. We’ve hardly dealt with the vulnerability of a free society that has been attacked by a medieval one, except we have become more medieval ourselves. It is baffling to me that people in our country actually think that George Bush, our president, is doing a good job. I am baffled that people feel security in someone who is clearly not concerned with that security or in building a future. It seems to be an Armageddon-based set of policies.
Posted by Dylan Foley at 5:59 AM

Labels: Art Spiegelman, In the Shadow of No Towers