The Death of McGurk’s Suicide Hall 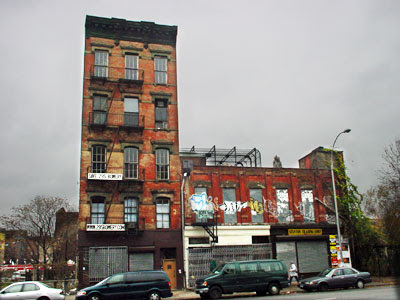 McGurk's Suicide Hall (on the left)
(Originally published in the New York Press on December 25, 2004)

McGurk’s Suicide Hall was the most infamous Bowery dive in 1890s New York City. Young prostitutes, some who worked in the bar’s dingy basement brothel, would go to McGurk’s, drinking carbolic acid to kill themselves. Owner John McGurk, a corrupt Tammany Hall politician, capitalized on the infamy of the girls’ deaths to promote his bar, where in 1899 alone there were six suicides.

295 Bowery, the battered 135-year-old building that was McGurk’s, sits right above Houston Street, with a banner of a skull talking on a cell phone emblazoned on the facade. The building will be torn down next month to make room for the luxury rental apartments of the new Cooper Square development.

"McGurk's Suicide Hall is very New York, in the fact it is both authentic and fake at the same time," said writer Luc Sante, who covered and revived the legend of McGurk's in his 1991 book “Low Life,” a chronicle of the New York underworld.

"It was a tourist trap and a sailor's trap," Sante said. "It had one of the first neon signs on the Bowery and singing waiters, but it also had the dark tradition where lots of prostitutes went to kill themselves there."

McGurk's was hardly a secret," noted Sante. "It was blared out in the tabloids and was the Mama Leone's of dives." Sante noted that advertising handbills for McGurk’s were found in foreign ports all over the world, carried there by sailor customers.

295 Bowery and the abandoned Church of All Nations, an old Christian missionary center next door, are being razed to make way for the second phase of the Cooper Square Urban Renewal Area. The new development, which will cover parts of three city blocks from Stanton Street to East 2nd Street, between 2nd Avenue and the Bowery, will include 700 new apartments and a 40,000-foot community center. Of the 700 units, there will be 175 units of low-income housing and 50 units of supportive housing.

For 38 years, the writer and sculptor Kate Millett occupied two floors of the city-owned building at a sweetheart rent of $485. Millett, the author of the 1970 feminist classic “Sexual Politics,” and the other residents had fought eviction for 10 years. They tried to turn the battered five-story building into a memorial for the girls who killed themselves. This year, however, the residents, accepted a relocation deal to city-owned lofts on East 4th Street.

Bob Paley of Avalon Bay Communities, the developer of Cooper Square, said that the demolition of 295 Bowery will most likely start in late January. “We have had some delays and are presently doing asbestos abatement.”

Some local housing advocates are pleased with Cooper Square. “The plan retains the urban fabric of the neighborhood,” said Steven Herrick, the executive director of the Cooper Square Committee, a non-profit neighborhood housing group. Herrick pointed the low-income units and the supportive housing as a success, as well as the much needed new supermarket for the community.

“Cooper Square will bring a Whole Foods Market and retail space to what is a blighted area,” he said.

Construction of Chrystie Place, the first building in the development, is well underway. It is an eight-story building that runs from Chrystie Street to the Bowery on Houston. On the Chrystie side, the building has a five story tower, reaching a total height of 13 stories. According to Bob Paley, the cost of Chrystie place has reached $150 million.

Taking a look at Chrystie Place on a brutally cold day earlier this month, the building is completely characterless, reminiscent mostly of a 1970s two-level coffee table. The main attempt at details on the facade of the building are the built-in air conditioners.

Chrystie Place, which will be similar to the architecture that takes over the McGurk’s site, is like any other ugly, modern rental palace. It pales in comparison to the grand lines of the former Church of All Nations, which has been left to go to ruins. Until the early 1990s, the former missionary center was an arts space named Cuando. The artists were kicked out for the impending urban renewal. This big urban renewal was slowed down by the residents of 295 Bowery fighting eviction.

The real estate explosion on the bowery has officially reached a fevered pitch. Much more development, many more large souless buildings on the Bowery can be expected. If McGurk’s Suicide Hall is a symbol of the Bowery’s sordid, textured past, then Chrystie Place and Cooper Square are symbols of its bland, generic future.

As a New York landmark, McGurk is a mix of fact and fiction. Sante’s chronicle may be the most authoritative and colorful. As Sante writes, at McGurk’s, “the waiters, led by headwaiter Short-Change Charley, were armed with chloral hydrate (knockout drops),and they were reinforced by a formidable bouncer, a mayhem specialist named Eat-’Em-Up Jack McManus.”

Reached at her new loft space on East 4th Street, Millett was evidently upset by the inevitable destruction of 295 Bowery.

“Tearing down 295 Bowery is stupid and useless,” said the 70-year-old writer. “It is a perfectly good building. It is sound, solid.

“Both buildings” she said, referring to the old missionary center, “should have been renovated and retained. It is just greed. If you put a larger building in the same spot, you make more money.”

Millett’s extensive research on McGurk’s during her fight to remain at 295 Bowery led to the discovery of the names of 12 women who had killed themselves at McGurk’s. If you mention “McGurk’s Suicide Hall” even to the most cultured New Yorker, the strange name usually causes them to break out in involuntary laughter. Millett put the death of the 12 women in grim perspective.

“Most of the women were 16 to 18 years old,” she said. “They killed themselves out of desperation. Prostitution mesmerizes people, but they don’t put themselves in the prostitutes’ shoes. They were dismissed by their families and had nowhere else to turn.

Millett mourns the death of McGurk’s. “It was a fascinating part of city history and a valuable fact,” she said. “Greed was primary, but the city also wants to bury the fact of McGurk’s. It reflected badly on the city. They failed to respond to 12 kids killing themselves in little twosomes over many months. It’s as if we can bury the whole thing.”

Luc Sante also seemed saddened by the impending death of the old building that held McGurk’s Suicide Hall. “Again, a last remnant of Bowery life is slated for demolition,” he said.

Though not a New Yorker, I visit the Great City twice a year to see a relative. I have not only come to love NYC, but I'm fascinated by it's history. It happens that the relative I visit lives in the Bowery area. What passes for new architecture is an abomination. And yes, it is all about greed. There were not many options for women in terms of employment besides being a scullery maid or prostitute. Women were chattel, after all. And I totally agree that McGurk's should be considered not only a tribute to those so desperate, they would end their precious lives in such a hideous manner, but also a part of NY history that should be preserved. Before all is gone forever, New York, step up and SERIOUSLY stop the rape of your city's history!