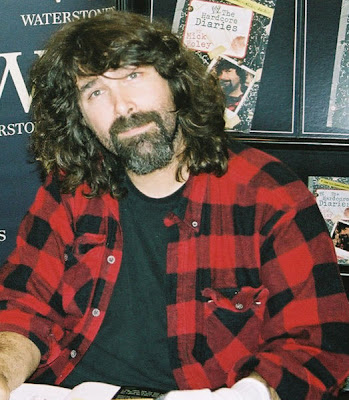 In the fall of 1999, three-time World Wrestling Federation champion Mick Foley's memoir, "Have a Nice Day!," grabbed Frank McCourt's autobiography "Angela's Ashes" by the neck and threw it out of the No. 1 spot on the New York Times' best-seller list. A surprised literary world learned the hard way that wrestling fans read and buy books, and Foley had become a bankable author.

After two successful children's books and another memoir, Foley has published his first literary novel, "Tietam Brown" (Knopf, 256 pages, $23.95), the story of Andy Brown, a teenager released from a juvenile detention center after serving time for murder. He is taken in by his estranged father, Tietam Brown, a compulsive womanizer and dubious role model, who lives in upstate New York.

In Foley's ironic and brutal novel, Andy Brown is missing his ear and has a paralyzed arm. Still, he is able to romance the most stunning girl in high school but must confront the school bullies with a fist full of quarters as his only weapon. There are many violent twists and turns in this fiction.

"I never realized that this story was all that dark, until I started getting feedback," said Foley in an interview at a New York City hotel. Foley is an amiable man who admits he looks more like a refrigerator repairman than a "bronze Adonis" wrestler. His characters Mankind, Dude Love and Cactus Jack, made him a WWF hero.

The first fragment of the novel, said Foley, was Tietam Brown exercising in the nude and drinking beer. "The story had haunted me," he said, "with characters that seemed so lifelike. I built on the idea of a father-son relationship that was a lot more ambiguous." In the novel, Tietam Brown's specialty is sleeping with married women and humiliating them.

By the age of 17, Andy Brown has suffered enough pain and violence for several lives - at age 5, he kills his abusive foster father; at 10, he defends himself from a child molester with horrific consequences. He then winds up in a group home, where he again fights off sexual assault with a murderous rage.

In two decades as a professional wrestler, Foley had to invent characters on the fly. "I was forced to create characters that were multidimensional, characters that people really loved or hated," said Foley. "I learned about human nature by literally observing people around the world. The characters I created literally believed what they were doing. The bad guys had to believe they were right, no matter what."

As a literary work, "Tietam Brown" is clearly a debut novel. Foley has Andy Brown tell too much, instead of building fully fleshed-out minor characters. Foley excels at writing about violence. There are withering scenes, from a one-hand fight with a school bully to Andy's harrowing defense against sexual assault.

Foley has had plenty of experience with real and theatrical violence. His own body is a map of pain - a broken jaw, two broken noses, lost teeth and a dislocated shoulder. "For 15 years, I was in pain every day," said the 38-year-old Foley, who is mostly retired from the ring.

Foley's stark writing on violence started in his first memoir, "Have a Nice Day!," where he recounts the 1994 Munich wrestling event where he pulled his own ear off. "I had to write the memoir myself," said Foley. The ghostwriter couldn't capture the famous match, where Foley had got his head caught between two cables and was choking to death. Extracting his head, his ear came off.

"You needed to tell the reader what it felt like, that your life was coming to an end," said Foley. "I realized the ghostwriter couldn't do it. Like a fox, I chewed my own paw off. That isn't such a big deal now, with that mountain climber cutting his own arm off."

Foley invested Andy Brown with his own missing ear. "That will be my niche in writing," he explained. "All of my main characters will have at least one of my physical flaws. The main characters of my next book will have missing teeth and love handles. I could write quite a few books and not run out of flaws."

In "Tietam Brown," fathers don't fare very well. The title father may be out to destroy his son, the stepfathers are all abusers and the history teacher/football coach is a vicious date-rapist heading for a rubber room. "I didn't know that the book was going to be about nasty fathers," said Foley. "One of the things about writing is you don't have to pretend you know what you are doing. It is fun to sit back and hear people's theories about the book, which are not necessarily incorrect."

Though there is much violence in the latter part of the book, Foley doesn't see it as excessive. "I don't think it is gratuitous and I don't think it is glorified," said Foley. "If anything, Andy's story is a cautionary tale about violence. Andy's violent past is something that he wishes he could escape."

At the end of the day, as a wrestler and as a writer, Foley still goes home to his wife and three young children in the Long Island suburbs of New York City. He tapped into some of that vulnerability to create Andy Brown.

"Your life can be somewhat amplified when you are coming home from a cage match at Madison Square Garden, with 18,000 people chanting your name," said Foley. "I get home and my wife Colette tells me to take out the garbage or to clean out the guinea pig cage. It helps me understand the nuances of life."
Posted by Dylan Foley at 7:48 PM