Tom McGuane on His Novel "The Cadence of Grass" 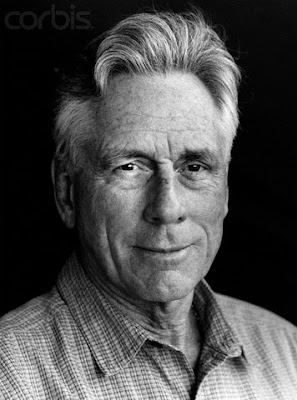 (This is one of my favorite interviews of the last decade. The book was smart and witty, and despite his literary stature, McGuane was truly wonderful to interview. He was also ruggedly handsome and radiant, like a movie star. Think of Harrison Ford, if he had aged well.)

In 1969, Thomas McGuane published his first novel, "The Sporting Club," starting a series of acclaimed novels with iconoclastic, self-destructive protagonists. In "The Cadence of Grass," McGuane's ninth novel and his first in 10 years, he conjures up the dysfunctional Whitelaw family, headed by the ruthless Montana bottling tycoon Sunny Jim.

At the opening of the book, Sunny Jim is dead, but he still is a control freak from beyond the grave, using his last will and testament to force his daughter, Evelyn, to stay married to her ex-convict husband, Paul. Bedlam and tragedy soon overtake the family.

For McGuane, the new novel started with an examination of local powerbrokers. "I have this fixed idea about junior oligarchs like Sunny Jim, whether they own the local bottling plant or the Ford dealership," said McGuane in an interview at a New York City hotel. "On a larger scale, Sunny Jim could be Robert Mugabe (the dictator of the Zimbabwe) or Ariel Sharon. This is my attempt to create a microcosm of society. You can take a larger picture of Sunny Jim to get a picture of national dysfunction."

McGuane contrasted Sunny Jim to his character Bill Champion, an elderly cowboy who has a tragic past with the Whitelaws. "Bill Champion is the kind of pure product of the land. He has grown up in a landscape that has had a lot to do in creating him. He'll ranch until it disappears under him. I see great value in people like him.

"Basically, Sunny Jim and Bill Champion came out of the same soil. It has always fascinated me, the disparity from a comparable geographic background."

McGuane's novels usually have cracked main characters, and the one in this novel is Paul Crusoe, the ex-con son-in-law. He evolves in this powerful novel from an appealing rascal to a much more dangerous figure. "He's the devil," admitted McGuane. "I was fascinated that by what we idealize in contemporary manhood is a very short distance from wickedness. Paul is charming and seductive, and I hope charming to readers. He has confidence, and such superficiality and cynicism, that he is unaware that danger is approaching."

Paul's estranged wife, Evelyn, is a modern rancher, breeding horses and raising cattle. She is frantically trying to stay away from Paul. "Evelyn, with all her weaknesses, is trying to find values with durability," said McGuane. "She has that weakness - great women who wind up with bad men."

Like his earlier novels, "The Bushwhacked Piano" and "Ninety-Two in the Shade," McGuane injects an element of farce in the new novel. The reader meets a transvestite Norwegian rancher who saves Evelyn in a blizzard. When Paul is caught embezzling from Sunny Jim, Sunny Jim has him drugged in a hotel room, his kidney surgically removed and sold to pay his debts. "I knew of an actual case where a kidney was stolen," said McGuane, "though frankly these ideas come from my imagination."

In his novels, McGuane uses a sarcastic, witty tone that uncovers sad truths about life, like Evelyn's loneliness or a dying woman's hopes. McGuane said his style has roots in his family background. "The voice was conditioned by growing up in a loud-mouthed Irish Catholic household, where witticism, banter and sarcasm are all part of a voice that tip-toed around more serious issues that bubble up through that kind of thing," he said. "That's the family voice and somehow that turned into my literary style."

The 62-year-old McGuane was raised in Michigan, but moved to Montana in 1969, after the success of "The Sporting Club." "I had always wanted to live in Montana," he said. "I bought a small ranch. It kind of happened." He lives with his wife, Laurie, on a 3,000-acre ranch in McLeod, near their four children. On the ranch, they breed horses and keep cattle.

In his 33 years in Montana, the state has changed a great deal, he said. "Montana is getting increasingly more conservative," said McGuane. "We are getting white-flight from Los Angeles. There are retired people moving here who don't want to pay taxes; it is getting harder to support the schools. There is also uncontrolled growth outside of the major cities, but Montana is still dominated by open space."

Montana's old ranching and agricultural values are threatened by change. "With the bad economics of ranching and the four-year drought, we are seeing small ranches fail by the thousands," he noted.

There is also a kind of leisure class of wealthy tourists developing. In the towns such as Livingston, near where McGuane lives "there is a weird colonial aspect that is a by-product of tourism, where people preoccupied with leisure are being served by locals in menial positions."

Throughout his decades in Montana, McGuane has always been a conservationist. "I support American Rivers, a river-conservation and restoration group and Craig-head Environmental Research Institute, a group that protects grizzly bears," he said. "As I get older, and have some ability to provide advocacy for these groups, I have become more active, but not nearly enough."

Although most of his novels now take place in Montana, McGuane dismisses the label of being a Western writer. "I don't think that label holds much water," he said. "I always make a trap for people by saying, "Let's talk about New Jersey writing.' After you get through the superficial stuff, writing is rediscovering the same thing."