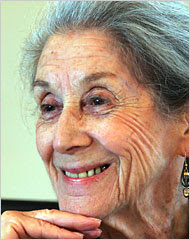 In her new short-story collection "Loot" (Farrar, Straus and Giroux, 240 pages, $24), South African writer Nadine Gordimer explores humankind's inability to escape its past - from the horrors of Africa's colonial period to the reincarnation of souls over and over again.

Gordimer's quirky tales move from examining an elderly man abandoning his wife to the mass insanity that grips a South African university. In her story "Mission Statement," a touching affair between a white aid worker and her lover, a black African government minister, is doomed by the ghost of her mine-owning grandfather.

"Of course, those of us who are 'colonial' all have the sins of the father," said Gordimer, in an interview from her home in Johannesburg, South Africa. "Anybody who is white in Africa has this guilt, especially if you had a father who exploited the local people and took land away from them."

Gordimer's 50-year writing career has produced 23 novels and short-story collections. The 79-year-old writer was one of the major white intellectual opponents against the racist apartheid regime in South Africa. Her fiction attacked the insidious nature of apartheid and how it corrupted everyday life.

"Under apartheid, everybody, even in their most private times, was invaded," said Gordimer. "Nobody was exempt from it."

Through the repression of the old regime, many of Gordimer's writer colleagues, like Breyten Breytenbach were imprisoned for their political views. She said that she had no choice but to stay and fight for a better government for both white and black South Africans. "Jean-Paul Sartre once said that when you go into exile, you lose your place in the world," said Gordimer. "I have friends who would have spent long years in prison if they did not go into exile. Some of us chose to stay. I couldn't just stay in the white enclave. I had to play a humble role in the liberation struggle or I wouldn't have been able to stay here."

Gordimer said she sees parallels between the paranoia and pervasive fear in the old South Africa to new fears of terrorism in the United States and how the war with Iraq must affect the American population. "You can't say you are living in the United States and you are not affected by the climate of fear that exists now," she said. "There is nothing in your life that stands apart from it."

With the fall of apartheid in the early 1990s, Gordimer's work has focused on the new South Africa, the new government corruption and post-apartheid society. One of the pressing topics for South African novelists, noted Gordimer, is HIV/AIDS. "The big question now is AIDS," said Gordimer. "We have the highest infection rate in the world. This ghastly disease is threatening to undercut all the wonderful efforts at development."

In her title story, "Loot," Gordimer writes of an earthquake that makes the ocean recede. Greedy villagers jump into the ocean bed, scooping up junk and treasures alike. The ocean comes back and drowns them. "I'd say that story is a parable," said Gordimer. "To me, what I get out of writing is to let the reader have access to their own baggage in their interpretations."

During her long career, Gordimer has avoided autobiographical writing. "I don't write from my own navel," she said. "My only autobiographical work was my first novel, 'The Lying Days.' I've hopped about, projecting myself into different stages of different lives. It just worked out that way."

Gordimer also said that she scrupulously keeps her fiction separate from her political writing. "If I am going to make social commentary, I do it in an article," said Gordimer, who won the 1991 Nobel Prize for Literature. "My fiction is something actually apart from it. I never mix the two. I am not a propagandist."

After she won the Nobel Prize, Gordimer used some of her award money to encourage the development of books written by black South African writers in their native African tongues. The project has had mixed results. Writers were able to workshop their books, but few books were published. "Publishing is slow," said Gordimer, "because distribution is poor. In the vast black ghettos, there are no bookshops and few libraries. Books have to have readers."

In the novella "Karma," which finishes the new collection, Gordimer explores reincarnation. She tells stories in many voices, from that of a corrupt former revolutionary to a stillborn fetus, among others. "I am an atheist," she said, "but I had become fascinated with the idea that there can be an unfinished life."

One thread of the story in "Karma" is about an abandoned white baby girl raised and loved by a mixed race couple in the 1970s under the old apartheid regime. When the girl becomes an adult, she must betray her parents if she wants to live life as a white woman. When she falls in love with a white man, she must leave the country to marry him. In the beauty of her writing, Gordimer conveys the horror of the old system.

The spiritual side of "Karma" evolved because of Gordimer's research to write a Muslim character in her 2001 novel "The Pick Up." She had to read the Koran. "From the Koran, I moved on to Buddhist texts," said Gordimer. "That is where the fascination started. One does have moments of deja vu, where you have no idea how something is familiar. You've seen it before, you've done it before, and you can't explain it. Karma tries to explain it."
Posted by Dylan Foley at 11:59 AM