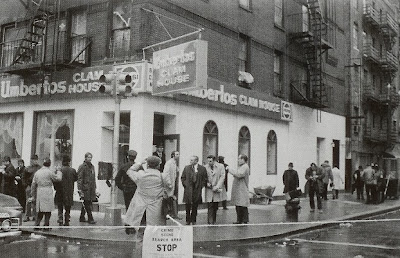 In the early hours of April 7, 1972, the renegade Brooklyn mobster Crazy Joe Gallo was killed at Umberto’s Clam House in Little Italy by a hitman who calmly pumped bullets into the fleeing Gallo’s back.

Tom Folsom, the author of the thrilling new history “The Mad Ones: Crazy Joe Gallo and the Revolution at the Edge of the Underworld”(Weinstein Books), argues that Gallo, a small-time hood and Mob killer, broke ranks with Mafia tradition after he immersed himself in the 1960s revolutionary vibe of Greenwich Village. “Joey Gallo was into the Village’s holy trinity of jazz, pot and sex,” says Folsom.

On a recent rainy day, Folsom took the Post on an exclusive tour of Joey Gallo’s Village and Little Italy haunts. The tour starts at the Corner Bistro (331 W. 4th Street), in all its bohemian splendor. “In 1961, Joey faced a 10-year prison sentence for shaking down a bar owner,” says Folsom. “Instead of working with his lawyers, he gave an long interview to the Post here on how he was being persecuted by Bobby Kennedy.”

Next, we move on to the Village Vanguard (178 Seventh Avenue), the venerable jazz spot. Under the neon sign, Folsom explains how Gallo tried to snare a jazz great. “Joey Gallo tried to force Charles Mingus into a record contract,” he says, but the jazzman out-crazied him. “Mingus checked himself into Bellevue, saying ‘I’m hiding from Crazy Joe.’”

Onward to Eighth Street. Gallo shunned Red Hook, Brooklyn, for the beatnik thrills at 20 W. 8th Street. “Here Gallo had a ground-floor apartment, living there with his showgirl wife,” Folsom says, pointing to an old carriage house now converted into a store. Gallo threw hash parties and slept with a shotgun in his hands. On the corner of MacDougal and 8th Street is a clothing store for drag queens that was once housed the radical Eighth Street Bookstore. “Joey told the clerk he read a lot of Camus,” says Folsom. “He pictured himself as a revolutionary-artist-philosopher, but it is hard to write or paint when you are running a gang war in Brooklyn.” Gallo threw his 25 soldiers against the Colombo family’s 200 killers in a war where the terms “going to the mattresses” and “sleeping with the fishes” were invented.

“This year is the 40th anniversary of Mario Puzo’s novel ‘The Godfather,’” notes Folsom. “Puzo stole stories from the Gallos.”

Going through Washington Square Park, we pass the statue of the Italian revolutionary Giuseppe Garibaldi. “Joey saw himself as fighting the system, and the only system he knew was the Mob,” says Folsom.

In Little Italy, Folsom points to the corner of of Mott and Grand, near where Francis Coppola filmed the shooting of Don Corleone in “The Godfather.” “The movie came out three weeks before Joey was shot,” says Folsom. Getting out of prison in 1971, Gallo, a charming sociopath, talked of writing books, and was embraced by literatis like Gay Talese and Nora Ephron.

We pass the new Umberto’s, which reopened in 2000 at Broome and Mulberry. It is still run by the brother of a reputed Mafia capo, who owned the original.

Finally, we are in front of the site of the old Umberto’s Clam House, a block down at Hester and Mulberry Streets. A tourist-trap restaurant is in the location. “Joey had been at the Copacabana that night, celebrating his 43rd birthday,” says Folsom. “He insulted some gangsters there that night, but he always had a long list of enemies.” A tall, handsome killer shot him at Umberto’s, and he fell mortality wounded in the street. Bob Dylan’s 1976 song called “Joey” made Gallo into an outlaw hero.

Folsom points to the asphalt. “Crazy Joe Gallo probably died right near that manhole cover,” he says. “In the end, the system got him. That was the lesson of the 1960s--you can’t fight the system.”