Paul Auster on "The Book of Illusions" 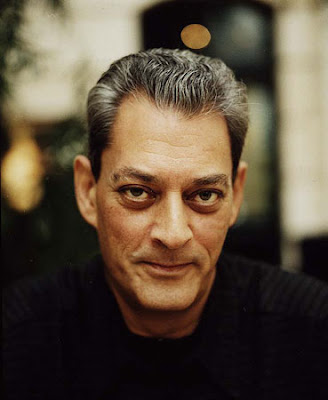 The protagonist in Paul Auster's new novel is David Zimmer, a college professor who has lost his wife and children in a plane crash. Late one night, as he sits on his couch drinking himself to death, he watches a documentary on 1920s film star Hector Mann, who disappeared six decades ago. He laughs for the first time in months.

In "The Book of Illusions" (Henry Holt, 336 pages, $25), Zimmer goes around the world to track down Hector's films. A woman with a disfiguring birthmark and a gun in her purse appears at Zimmer's house. "Hector needs to meet you now," she says. In this classic Austerian plot, a filmmaker makes films that no one will see, a man meets the love of his life at a bank robbery and a shock to the system restores another man to life.

Chance and happenstance play a major role in Auster's fiction, where a repeated wrong number late at night can pull a man into a life-changing adventure. In an interview at his beautiful brownstone in Brooklyn, Auster confessed he doesn't know where his plot ideas come from.

"I am not being coy, but it is impossible to answer that question," he said when asked how the character of Zimmer developed. "I don't know where things come from when I am writing novels. All I know is that when a story comes to me, and if it is compelling and obsessive enough, I have an obligation to follow it, to carry it out."

In his 35-year career, where at one point he was a starving poet and translator in Paris, Auster has published more than 30 books, including 10 novels, books of poetry, translations and several memoirs. He has also written screenplays. His latest bestseller was "I Thought My Father Was God" (HarperCollins), a 2001 anthology of stories written by Americans from across the country that Auster read on National Public Radio.

The 55-year-old Auster said he believes his fixation in the present novel on Zimmer, a man who is spiritually dead, might have something to do with growing older. "It is possible that this book is a reflection on my own aging," he said. "You know you are going to die, everyone understands that, but when you hit 50, your body starts to break down. More important, a lot of the people you have loved in your life are dead - your parents, your relatives are gone. I spend as much time communicating with the dead as with the living. I see the end a lot more clearly."

In "The Book of Illusions," Auster invents the life and work of Hector Mann, a silent-film legend. He describes ornate silent films full of pratfalls and intricate camera angles. These imaginary films came to Auster years before he had any success as a screenwriter with 1990s films "Smoke" and "Blue in the Face."

"The idea for Hector Mann came years before I started working in film," said Auster. "I had this image of a man in a white suit with a black mustache. I think it was inspired by Marcello Mastroianni in 'Divorce Italian Style.' My only ambition was to write a book of silent films that Hector had made, a book of imaginary films."

The imaginary films became part of a more textured, complex story. "Little by little, a story gathered around Hector," said Auster. "I never understand when an idea is born. It is suddenly there."

Auster writes Hector's life as an adventure story. Hector flees California after an accidental death. He is torn by guilt, however, and sets up a tortured life. He will make films of great genius and innovation, but they are not to be seen, but burned. "For me, it is a tragedy," said Auster, of the guilt-racked Hector. "Art is not meant for the flames."

Although Auster has a happy second marriage to the novelist Siri Hustvedt and two healthy children, characters in at least three of his novels have had their families wiped out. "It is not something I am actively seeking," said Auster. "People who lose their families are in a particular kind of limbo. They are open to new experiences. Some of the stories I am interested in writing can only begin at this moment of crisis and loss."

Zimmer follows the woman with the gun to Arizona, where he meets Hector and finds a new lease on life. "If Zimmer had still been married, he wouldn't have been sitting half drunk on the sofa late at night, watching a Hector Mann documentary," said Auster. "Could he go halfway around the world, looking at old silent movies? These metaphysical adventure stories begin at a point when the character has lost everything."

Auster's experience with the movies has not been so financially rewarding. "Though 'Smoke' made a lot of money for Miramax, I didn't make money. Just enough to buy the occasional box of cigars," he said with a chuckle.

Occasionally Auster gets flak from reviewers who say his plots are too extreme to be realistic. Auster said this might be linked to a 100-year-old trend in novels. "Eighteenth-century fiction is full of extravagant events - think of someone like Fielding or Swift," he said. "In the 19th century, writers began to normalize life - they looked for average lives. Stories outside the norm were no longer put in fiction."

Auster pointed out the evidence that is all around of coincidence and sheer chance moving life and stories along. "If you keep your eyes open, you walk out on the street and look at what people are doing and saying, or the way people behave with their families, it is a madhouse out there," he said with evident fascination. "Unforeseen things are happening all the time. My job is to write about this world that I know."