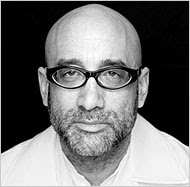 
Bruce Wagner's 1996 bestseller "I'm Losing You" chronicled the sordid Hollywood culture of movie stars and agents, sex and backstabbing. In a radical departure, Wagner's new novel, "I'll Let You Go" (Villard, 544 pages, $25.95), is a tale of Los Angeles inspired by Charles Dickens, where the grandson of a billionaire falls in love with a horribly abused orphan, developing a grand epic of the wealthiest and the poorest in Los Angeles.

"I was possessed by Dickens," admitted Wagner in an interview from his Los Angeles home. "Dickens and I share certain longings and desires to caricature the macabre."

In Wagner's epic, the lonely 13-year-old Toulouse Trotter comes from fabulous wealth. He lives in a mansion with his drug-addicted mother, Trinnie, a landscape architect. Toulouse's father disappeared before Toulouse was a wily and beautiful street urchin who has suffered unmentionable horrors. Her protector is William, a grand but deluded homeless man who believes he is the 19th century British designer William Morris. Wagner's lush prose, quirky characters and deft plot turns would make Dickens proud.

"I was laboring under the delusion that the book was only going to be 200 pages," said Wagner. The story was inspired by an obscure Arabian Nights tale, where a groom is snatched from his bride by genies on their wedding night. "Instead of genies, I used schizophrenia," said Wagner of Toulouse's lost father.

Besides being a novelist, the 47-year-old Wagner is a Hollywood player - a screenwriter and film director. His movie, "Women in Film" premiered at the 2000 Sundance Film Festival. He is also the creator of "Wild Palms," the short-lived avant garde TV series.

The brutal journey of Amaryllis, starting with the murder of her mother, forms the most gripping part of the novel. Before she was strangled, her mother sold Amaryllis for sexual purposes to buy drugs. William tries to save her by spiriting her away. "He lifted the girl to his back and then cloaked himself so that his jacket fell over her like a tarp; under the cover of the night, to an idle observer, she might be a mindless backpack of belongings, queerly squirreled away."

Amaryllis, however, is turned over to the cops. She then experiences the horrors of the Los Angeles foster-care system, winding up in a group home that is a modern hell, where the kids abuse each other. Amaryllis is rescued by a saintly deaf woman escaping her own private tortures: "The orphan watched this uncaged creature, mad with freedom, head bent to sky, gummy sea lion mouth open, pelted by the filthy, exorbitant rain, dizzy, gamey and exulted."

In contrast, there is the life of Toulouse and his brilliant cousins, with their unparalleled access to money and possessions. All that is missing is the true and consistent love of their parents. Toulouse and his cousins befriend Amaryllis, immersing her in the obscene wealth of the Trotter family.

To develop the hell of Amaryllis' life, Wagner immersed himself in the subject. "In researching this book, I actually became a court-appointed children's advocate," said Wagner. "I toured the homeless encampments, the single-room occupancy motels" of Los Angeles.

"By entering that world, you hear many appalling, beautiful and strange things. By entering the foster-care system, you become saturated," he noted. "Many things in the book come from real comments, that are then dreamed by me - the pornography, the sadism, the greed."

Murderous street people and a dogged cop act as catalysts for the plot. William is charged with murder, but he, Toulouse and Amaryllis wind up with much more than they have bargained for. In a nod to Hollywood, Wagner put walk-on parts in his novel by the actress Diane Keaton and the screenwriter Ron Bass, as an aloof deity.

Wagner uses Amaryllis, who craves sainthood so badly, as a vehicle to explore salvation. "It was very appealing to me, that a child could transcend her destiny," said Wagner. "She begins life in this book almost chained to the corpse of her mother, her mother who was her executioner. Amaryllis is always escaping death.

"I wanted to write a book where there is death, but it is cleansed of unnatural death," he said. "The book is about loss, but also about continuing. I wanted a novel where there is general humility and redemption."

"I'll Let You Go" is woven together by creative plot twists and turns. William's best friend commits a pivotal crime. The newborn Dumpster baby of another murdered woman winds up being adopted by an important character. Wagner is always full of surprises.

"Life involves tremendous coincidences," said Wagner. "When I was 21, I was having a lot of trouble. I was living in a halfway house in San Francisco. My head was shaved and my two roommates were parolees. I looked out the window and saw this vast empty lot. It was the grade school I had gone to as a boy. It had just been torn down.

"How do you explain that?" he asked, still incredulous. "It was absurd. It was one of the coincidences that still assault me daily." Wagner taps these coincidences for his writing. "If coincidences are done in an artful manner, they feed the reader."

Throughout the novel, Wagner's anonymous narrator talks directly to and plays with his readers, admonishing them not to be skeptical, and sometimes he chastises them. He also gives out blithe footnotes.

"Sometimes a critic will say, "This cannot happen in real life.' I think that is the most psychotic thing a person can say," Wagner fumed. "That is a dangerous falsehood. It robs one of dreaming. This life of ours is so bizarre, so fantastical - you will see that anything can happen."
Posted by Dylan Foley at 11:18 AM