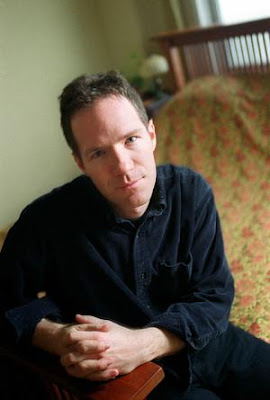 After Rick Moody finished his novel "Purple America" in 1997, he was burned out and decided to pursue a different kind of writing project. He picked up the legend of Joseph Moody, his alleged ancestor and an 18th century minister who wore a black veil over the guilt of killing a childhood friend.

In his memoir, "The Black Veil: A Memoir with Digressions" (Little Brown, 325 pages, $24.95), Moody writes a searingly honest account of a nervous breakdown he had while living in New Jersey in his mid-20s and weaves it together with the story of Joseph "Handkerchief" Moody, the deranged minister.

What Moody has created is a riveting exploration of the patriarchy in the United States. By focusing on such diverse topics as high school gunmen and the writer William Burroughs' killing of his wife, Moody pulls apart the concept of guilt in America.

The 40-year-old Moody is the author of the novels "Garden State" and "The Ice Storm." In "The Black Veil," Moody plunges readers into the life of "Handkerchief" Moody.

As a young boy in colonial Maine, Joseph Moody had killed a friend in a hunting accident. "In his late thirties, he had a breakdown, precipitated theoretically by the death of his wife, and began wearing a veil in public all the time," said Rick Moody. "He became the leaping-off point for the Nathaniel Hawthorne story "The Minister's Black Veil.'"

For Moody, guilt is braided into the fabric of American society, and comes from our Puritan ancestors. "The book makes the case that American culture is founded on a guilty conscience, that it is built into the history of the nation," Moody said in an interview in New York City.

"The most compelling one is that the strains of Puritanism that first flourished on this continent had guilt as an uppermost feature of their theology."

Moody acknowledged that there are many flavors of guilt in America, that there are subtle differences in the that Protestant, Catholics, Jews and Muslims look at moral issues.

"America as a melting pot found a way to use all [guilt]," said Moody. "It is cross-cultural. People can read this book who aren't WASPs like I am, and understand and feel some sympathy with that."

Ever since Moody was a child and his grandfather told him stories about their strange ancestor, he has been fascinated by Handkerchief Moody. Moody admitted that his relation to Handkerchief Moody is a tenuous one. "We share distant ancestors, but we aren't directly related, even though my grandfather says we were."

In the mid-1980s, a chance encounter with a relative of Handkerchief Moody led to the dead minister's diaries. "When I came upon his diaries, I realized that it might be more than a curiosity," said Moody.

Moody used the minister's story as a chance to explore the often harsh relationships between fathers and sons and mental illness in American society. He writes about fire-and-brimstone puritanical fathers in colonial America and his own distant businessman father in suburban Connecticut. He turned the discussion of fathers into an examination of the patriarchy.

"There is a constrictive element to the patriarchy," said Moody. "Power issues are necessarily bound in any examination of patriarchy. Patriarchy always brings you back to questions of politics, nationhood and culture as a whole."

What Moody found was that his obsessions with guilt and sex traveled down his paternal line. "My father, who is not a literary guy, seems to have all the same ghosts," said Moody. "My family wasn't Puritan ministers. We were agriculturalists and salespeople, and yet we had all the obsessions the ministers had. It is social control."

In his memoir, Moody takes his father on two genealogical road trips to find Moody ancestors and the roots of Moody guilt. High comedy results.

"I knew the book was partially about Dad," said Moody.

"The patriarchy is founded on the problems of dads. If I could persuade him to come, there would be interesting collisions. Also, this guy is an executive. You put him on stuff and he gets things done. I'm too shy."

To pull the two halves of the book together - the tortured life of Handkerchief Moody and the author's own nervous breakdown and experience with guilt - Moody hung the book on major incidents. "It became necessary to find some narrative throughline to pull the whole story together," he said.

"I decided with the narratives I like, as in [Vladimir] Nabokov's "Speak Memory' or [Ralph Waldo] Emerson's essays, the first-person has to be a binding agent, so it had to become apparent that I had to have big narratives where I am a character to get the disparate material in one book. The big narratives were the psychiatric hospital and going to Maine with my father."

Moody writes movingly about being locked in a mental hospital for a month in the mid-1980s, and also writes in a brutally honest manner about a period of panic attacks and rape nightmares. "[The rape fears] happens to be the truth, unfortunately. [They] had to be there for this book to explain what "the veil' was and how it lives on."

Moody's new book has already stirred controversy by his indictment that all Americans share the guilt of their history, through the line, "To be an American is to be a murderer. Don't kid yourself. Wear a veil."
Shot over the bow

"I think it is a logical end thought to the book," explained Moody. "I don't know if I mean it more than metaphorically, but it is an important shot over the bow in terms of thinking about American history. We got on this continent by wiping out a lot of people who were here already."

Moody admitted that writing about his nervous breakdown and guilt-wracked family history has had some cathartic effect, but he still has his demons.

"I feel I used up this material and I am on to a new novel," he said. "I have left this material behind. But if it means I have triumphed over adversity, I don't imagine so. I don't think anybody does."
Posted by Dylan Foley at 3:54 PM