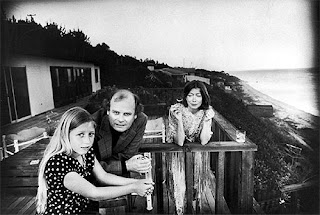 In December 2003, Quintana Roo Dunne, the daughter of writers Joan Didion and John Gregory Dunne, walked into a New York City hospital emergency room complaining of flu symptoms, then suddenly went into septic shock and a coma. Three days later, after visiting the still-unconscious Quintana at the hospital, John Gregory Dunne died a massive heart attack while talking to Didion at their Manhattan home.

In her memoir of the aftermath of her husband’s death, “The Year of Magical Thinking” (Knopf, $24), Didion has written a sharply focused chronicle of her grief and how she dealt with her daughter’s illness. In their 39-year marriage, Didion and Dunne became America’s most prominent literary couple, producing a dozen novels and memoirs apiece and writing screenplays for “True Confessions” and “A Star is Born.” In lucid and clear prose, Didion details her need to function and take care of her daughter, delaying the grieving process. Didion’s short memoir is raw and full of dread, and is destined to become a literary classic on grief and death.

“What happened over the course of the year was the feeling that anything horrible could happen,” said the 70-year-old Didion from her book-lined apartment. “I kept expecting a catastrophe. Crossing the street, I expected to be hit by a taxi. It became hard to move around."

On the day of Denver Post interview with Didion, the author was battling a cold. Tragedy has also not left Didion alone. After 20 months of life-threatening medical conditions, Quintana died of acute pancreatitis on August 29th at the age of 39. Didion’s famous high-cheekboned face is lined and tired. Despite being a newly grieving mother, Didion locked onto the freelance reporter with her liquid brown eyes and an intense interview began.

Writing a book that captured the the temporary insanity and the harshness of grief appealed to her. “Grief is an experience that everybody goes through sooner or later,” she said. “I’ve been reading an awful lot of literature at the level of which it happens. Usually it’s after the fact and people write about their grief long after the fact. I thought there would be some value in reading a raw account.”

Didion chronicles her irrational thoughts, like refusing to throw out her husband’s shoes in case he might need them again. She doesn’t move Dunne’s magazines and books he was reading before he died. She creates rituals, a kind of “magical thinking,” the term that forms the title, as if she co uld undo his death.

“Magical thinking is a phrase I first came across reading anthropology,” she explained. “Tribal thinking is magical, and if we do certain things, we can affect events and the crops will come in. Children think that way. ‘If I do such and such, my parents won’t get divorced.’ It becomes very pronounced when you are grieving.”

Didion also explores the literature on death and grieving. One hundred years ago, Americans died in their homes. Now they die in sterile hospitals and hospices. Since the 1930s, she writes, stoicism in grief has become the norm.

“(Grief) has become medicalized,” she said. “Death has been medicalized. It happens offstage. There is a contemporary emphasis on being happy and providing happiness to others. People avoid manifesting grief. It is a strange thing, because you have to deal with it sooner or later.”

Didion had to put her own grief on hold to tend to her daughter. “It was quite an unstable time for me because of Quintana,” she said. “She was in such a grave condition. I had to pretend that John’s death hadn’t happened. I couldn’t deal with them both at the same time. I was crazy but I managed to take care of what needed to be done vis-a-vis Quintana.”

Didion’s memoir is a unadorned tribute to her four-decade marriage to Dunne, where the two writers usually spent 24-hours-a day together, an impossible feat for most married couples. With rueful frankness, she also writes about their fights, including her then-shocking column in Life magazine in 1969 where she wrote they chose going to Hawaii over getting a divorce.

“There wouldn’t be any reason to do the memoir unless it was going to be straightforward,” said Didion. “The sense in which our marriage was a good marriage was in its length. When someone dies, it is very much on your mind the time that you’ve wasted fighting.”

Throughout the book, Didion returns to the moments of Dunne’s death, then mixes in other memories, like the time in 1966 the couple first took their three-day-old adopted daughter home from the hospital or their last trip to Paris. Reviewing the death scene becomes a riveting, recurring moment in the book.

“I didn’t know how to structure the book at first, then I realized the way to do it was to repeat the experience (of the death) for that is the experience of the person who is left,” she said. “You try to recreate what happened. Every time you go back to it, you think of details that you didn’t think of as important. Everything comes into focus.”

Even with Quintana’s death, Didion has no plans to rewrite the memoir. “It was already printed, but going beyond it, it was something I did,” she said. “It’s like revisiting any work. It’s finished. I am not going back to something that is finished.”

In December 2004, a year after Dunne’s death, the magical thinking started to lift and Didion realized she was heading into acceptance of his permanent absence.

“People say that it happens after a year,” said Didion. “There is something in the first year where everything is a reminder of the same day a year before (when the person was alive). It is another reason why you obsessively notice the calendar: “On this day a year ago...’ When the days stop being that long, you realize you are letting go, which is not a good feeling, but it is necessary.”

Dylan Foley is a freelance writer in Brooklyn, NY.

Very good review. I plan on reading this soon. A widow's experience is many times very similar and yet so incredibly individual. A year is really nothing on the grief scale, and society as a whole does not seem to understand and many times does not want to delve into the grief process. Sometimes, those not suffering bereavement and grief just want it to go away, because it is so raw and uncomfortable.
"Writing a book that captured the the temporary insanity and the harshness of grief appealed to her" is an apt description of grief. elaine