Salman Rushdie on Terrorism and Bloody Kashmir in "Shalimar the Clown" 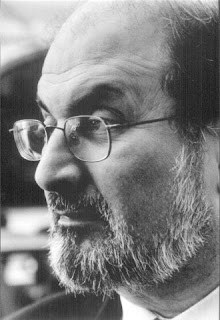 By Dylan Foley
Early in Salman Rushdie’s ninth novel “Shalimar the Clown”(Random House, $26) a retired American diplomat named Max Ophuls has his throat cut by his driver on his daughter’s doorstep in Los Angeles. Though the killer Shalimar is a trained terrorist, the murder is solely to avenge the theft of his wife 25 years before. Rushdie has crafted an eloquent and engrossing novel about terrorism, lust, revenge and the death of tolerance in our time.

The central action in the novel takes place in the small hamlet of Pachigam in Kashmir, territory fought over by India and Pakistan. Pachigam is an integrated village famed for its traditional Indian theater. The Muslim Shalimar is a clown and his wife Boonyi is a Hindu dancer. Boonyi is seduced by Max, who is the U.S. ambassador to India, and flees their village. A brokenhearted Shalimar joins the Muslim insurgency, vowing to kill his unfaithful wife, her lover and their illegitimate child. Using the destruction of Kashmir as his backdrop, Rushdie explores the dark roots of terrorism. In his vivid prose, the novel moves from the Holocaust in France, to the jihadi training camps in Kashmir and the secret wars of the American government, going through the dark areas of world history.

Rushdie examines the nuances of terrorism through the voices of his characters. “This is everybody’s subject no wadays,” says Rushdie from Manhattan’s exclusive Soho House, a refuge for British expatriates in New York City. The author is dressed in all black and looking fit and healthy for a photo shoot later in the day for Esquire. “Like everyone else, I am trying to make sense of this new world where such rage is unleashed.”

For Rushdie, writing about Kashmir was returning to his family history. “My family was from there originally and because it was the place that I’d been going to for all my life and I cared about,” he says. “The real explosion came in Kashmir in 1989. That was the year where the trouble with 'The Satanic Verses’ started. I got distracted for a while.”

The trouble Rushdie is referring to is the fatwa, or religious edict, that the Ayatollah Khomeini of Iran put on the writer’s head, ordering faithful Muslims to kill him. For nine years, Rushdie was the world’s most famous writer and terror target. Under intense international pressure, Iran lifted the fatwa against Rushdie in 1998.

“People join insurgencies for a whole range of reasons and only some of them are ideological,” says Rushdie. “In Kashmir, a lot of people joined up because they needed a paycheck. People sometimes join for banal reasons and sometimes for personal deformations in their lives. Shalimar the Clown’s heart is broken and that triggers something in him.”

The 58-year-old Rushdie8 0s most impressive feat in the novel is keeping the unhinged Shalimar, who likes to kill with a knife, as a surprisingly sympathetic, flesh-and-blood character.

“I like him,” says Rushdie. “That’s the amazing thing, to like him, but writers fall in love with all kinds of creations. If I didn’t really retain the feeling of sympathy, he would quickly become a cartoon.”

Shalimar’s pride forces him to kill his unfaithful wife. “It has a lot to do with the culture of honor and shame,” says Rushdie. “There is no doubt in my mind that Shalimar still loves Boonyi, but it is a code that he cannot break out of. He is going to kill the woman he loves, and that is a dreadful calamity to the soul.”

In Pachigam, Muslims and Hindus live in a grumpy coexistence. The slow strangulation of the community by the Indian military on one side and the jihadis on the other turns the village’s story into a fable of the death of tolerance.

“I’m old enough to remember a better time and places such as Beirut that were open, sophisticated, cosmopolitan cities as recently as the 1960s,” says Rushdie. “It is well within everyone’s living memory. The global decay of tolerance is the real tragedy of our time.”

Though “Shalimar the Clown” is a tragic story, Rushdie injects moments of levity, from the sexually frustrated Indian army commander Turtle Colonel to20the Iron Mullah, a fire-breathing Muslim cleric made literally out of tank parts.

“The genesis of the image of the Iron Mullah is the one piece of straightforward allegory in the book,” says Rushdie. “The Indian army came first and repressed people, making it possible for Islamic radicalism to be born out of the detritus of the Indian army. The Iron Mullah became idiosyncratic and attractive to me in ways that I hadn’t suspected. I wanted to use him more.”

In one scene in the novel, a group of jihadis in Kashmir prepare to kill a group of unveiled Muslim women. In Rushdie’s view, the roots of Muslim terrorism seem to stem from a fear of women. “I think it is all about sex,” he says, his voice rising. “The great fear of Islamic radicalism is also the fear of the sensual life, as expressed through women and the freedom of women. That ideology goes to enormous lengths to circumscribe, to limit and deny women their sexuality and their freedom.”

When the inexorable rape and pillage of Pachigam occurs, Rushdie found the writing of that chapter excruciating. “It was a horrible scene to write, unbearable,” he says of the massacre of some of his favorite characters by the Indian army. “I woke up in the morning, wishing that I didn’t have to write it. I tormented myself by thinking that maybe I didn’t have to do it, maybe I could find some plot twist that gets them out of it. Those were all the ways of delaying the inevitable.”

As an observer of world affairs, Rushdie admits to ambivalence over the state response to terrorism. “I am depressed about the U.S. in Iraq,” says Rushdie, “but there is the question that arises, ‘How would one do better? What would you do differently?’ That’s a hard question to answer. We may have strong views about mistakes, but here we are. The only thing that tempers my criticism of Bush and Blair is not being sure if I was in sitting in their chairs that I would do much differently.”

Dylan Foley is a freelance writer in Brooklyn.
Posted by Dylan Foley at 12:22 PM