Nathan Englander on “The Ministry of Special Cases” 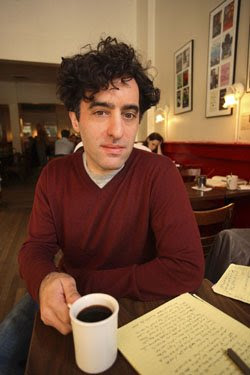 (Originally published in the Newark Star-Ledger in May 2007)

In 1999, the writer Nathan Englander burst onto the American literary
scene with his masterful and satirical story collection “For the Relief of Unbearable Urges,” chronicling the Jewish communities in New York Jerusalem and Europe. Eight years later, Englander is back with his debut novel “The Ministry of Special Cases”(Knopf, $25), which is the story of the Poznan family during the Argentine “Dirty War” in the mid-1970s after their only son is “disappeared” by the military. The novel moves deftly from the black comedy of one family to the unmitigated horror of parents realizing that their child will never been seen again.

Kaddish Poznan is a hijo de puta, son of a whore, born in a Buenos Aires brothel where his Jewish immigrant mother worked. For his entire life, Kaddish has been an outcast from the Argentine Jewish community. Nearing 50, Kaddish has a lucrative job going into the section of the Jewish cemetery reserved for prostitutes and pimps, obliterating the names on the gravestones for the occupants’ now-respectable children. Kaddish and his wife Lillian have a 20-year-old son named Pato, a college student dreaming of revolution and smoking a lot of pot. Pato is taken by unidentified military men. The parents plunge into a Kafkaesque bureaucracy, where Lillian waits at a government office with other desperate parents looking for their children, while Kaddish goes into the underworld he knows well. He finds out the grim reality, that the military has dropped thousands of drugged, naked young people out of airplanes into the hungry River Plate. Lillian refuses to believe her son is dead. Kaddish has the
unimaginable burden: how to mourn for his son where there is no body? Englander, has created a beautiful novel that is both witty and brutal. In the swirling terror he has created, Englander addresses issues of identity, community and the destruction of a civil society.

Englander, 37, was raised on Long Island and educated at SUNY Binghamton and the Iowa Writers Workshop. “For the Relief of Unbearable Urges” won the Pen/Malamud Award. Englander lives in New York City and
poke with freelance writer Dylan Foley at the Hungarian Pastry Shop, a cafe near his home.

Q. How did you get involved with writing about the “Dirty War” and
Buenos Aires?

A.. With a book that you’ve spent a decade on, it is so strange to explain where it came from. In a sense, the book became my life. If somebody asked me, “Why is Kaddish this way?” I would have to say, “How else could he be?” I had meet some older Argentine guys when I lived in Israel whose lives had been so completely shaped by the politics of the 1970s. I had
also been to Buenos Aires for a friend’s wedding in 1991 and loved it there. Honestly, for me, it is the ideas that I have been obsessed, like identity, community and injustice, and the idea of bodies. Argentina became the right setting for it It’s not like a chose a setting and came up with the story. These big ideas were banging around in my head.

Q. There is an hysterical section about the Jewish pimps and whores of
Buenos Aires, and Kaddish’s family history, with tough guys like Hezzi Two-Blades
and Talmud Harry who formed their own synagogue called the Society of the
Benevolent Self. Did you invent this all?

For me, research works backwards. I like to dream. There was an actual
society of pimps and whores. People ask me, “What is your research? I
laugh. I don’t read Spanish, but I may have looked in a Spanish book
and have seen a picture. The picture was all I needed. In other books I used, I may have just read a paragraph. I read about a cemetery (for pimps and prostitutes). I could have spent 10,000 pages on the Jewish whorehouses. In the end, I wrote 150 pages, and I got it down to the 10 or 12 pages that it is now. That world in itself was fun to write. It took a while for me to figure out that this book was not about that world that Kaddish was born into, but the legacy of that world.

Q. Where did the Ministry of Special Cases come from?

A. Living in Israel, you learn that Kafka is not made up. People ask me how I would have imagined such a bureaucracy. Just try to get a parking permit in Jerusalem. You shall know the horrors.

Q. Why didn’t you go back to Buenos Aires while writing the book?

Last year, my editor and agent were each holding me by the arm. “You will cost us another decade if you go near that city,” they said. It made me realize that this novel is my own world. If I dream something, if I invent a Ministry of Special Cases, it exists and is true because it is central to my world.

Q. Kaddish believes that his son is dead. Lillian fervently believes he is alive. These positions shreds their marriage. How did you create their scenes together?

A. In terms of spending all this time in the book, for me to write these two characters, I had to treat them with absolute respect. That they can be in the same house during this nightmare and have opposing views on their son, it is not for me or the narrator to judge them.

Q. Under curfews, military killers drive around in green Falcons rounding up kids, torturing and killing them. Neighbors pretend to be blind to these atrocities. Is this the collapse of civil society?

A. Part of civil society is a politeness that allows for things like this to happen. A woman’s relative disappears and she is told not to help to look for him. The idea is that a neighbor disappears and you don’ mention it for fear of dying. It allows for a surface to form. It’s a world upside down. I feel like it is politeness flipped into terror.
Posted by Dylan Foley at 12:20 PM