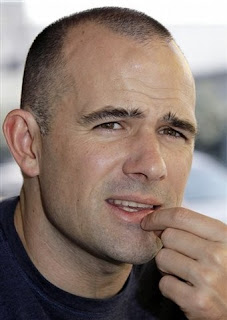 In 2000, Mark Z. Danielewski published his debut novel “House of Leaves,” a spoof of a horror story about a house that was one-quarter inch larger on the inside than the outside, and the fatal expedition to explore the caverns underneath. Filled with footnotes, fake graduate school dissertations and documentary film commentary, the novel segues into a grim tale of the brutality of human existence as told through the eyes of former battered child Johnny Truant. Backed by a committed group of Internet-savvy uber-fans, the book has sold 300,000 copies worldwide.

Now Danielewski is back with his sophomore effort, an equally demanding and swirling novel called “Only Revolutions ”(Pantheon, $26), the story of Sam and Hailey, two discarded teenagers who blaze across the United States in souped up automobiles, traveling from 1863 to 2063. Like he did in “House of Leaves” by standing the horror story on its head, Danielewski has now used his brilliance to hijack the classic American road trip by turning it into a mythical journey with two storytellers. For his efforts on the new book, Danielewski has been nominated for the prestigious National Book Award, to be decided on November 14th.

The 360-page novel is narrated by both Sam and Hailey. Sam’s story travels from 1863 to 1963, when John Kennedy was assassinated. Hailey chronicles the same events,=2 0but they take place from 1963 to 2063. The reader has to flip the book over every eight pages to read their different versions of events. Like “House of Leaves,” the layout and even the fonts used are crucial to the story. Each page is broken into four quadrants, with 360 words on the page, the number of degrees in a circle There are 90 words of Sam’s side, 90 words of Hailey’s side, and each has a “ticker tape” of history in a sidebar, listing famines, wars and more mundane things.

The book revels in an over-the-top “he said, she said” conflict where Sam’s glowing views of his heroism are contradicted by Hailey’s more pragmatic views. Sam’s transcendent sexual experiences with Hailey are in her eyes much less fun.

Danielewski’s work, told all in free verse, calls to mind the work of Walt Whitman in its celebration, denunciation and chronicle of America. It also pays homage to John Dos Passos’ epic “U.S.A. Trilogy.”

“Only Revolutions” is a vastly different novel than the writer’s debut work. “I looked at the moment,” said Danielewski, in a recent interview, of the success of his first novel. “I realized I could write a sequel to ‘House of Leaves,’ some riff on Johnny Truant, but that would be to support my lifestyle. Or I could take a different path and write a novel that I really believed in. That is what I ultimately did. ”

For Danielewski, “Only Revolutions” began with an image of urban grittiness, that he pulled from things he’d seen in New York City or Los Angeles, where he lives. “The book started for me with two kids who were homeless, asking for change on the corner,” said Danielewski, from a battered tea shop in New York City. “They had each other. If the law cared enough about them, it was only to move them along.

“I always knew the book was going to be a road trip,” he said. “I always like doing genres. As they are tearing across the country, they are withering the world around them. I love road trips, their energy, their malice and romanticism.”

Moving through two hundred years, America’s past, present and future, Sam and Hailey don’t age. Their speech changes, from the archaic vocabulary of the Civil War era, to the Roaring Twenties and the earnest phrases of the Kennedy era. “I realized that for Sam and Hailey, what came out of poverty was the richness of language,” said Danielewski “For me, I ended up finding the language of teenagers. It’s an outcast vocabulary. Your normal Webster doesn’t have most of these terms.”

Sam and Hailey start in a Civil War battlefield in the East. They then move through the Jim Crow South, and wind up in New Orleans in 1929, right before the stock market crash. It is a time of decadence.

“In New Orlea ns, it is the Roaring Twenties,” said Danielewski. “People were taking baths in Dom Perignon. Wall Street sneezed and the rest of the world caught pneumonia. Hailey sneezes that sneeze. As Sam and Hailey crash, the world crashes.”

Other mythical historical parallels abound. “Hailey winds up being taken to the hospital and being taken care of by a doctor in a wheelchair,” he said, shades of Franklin Delano Roosevelt and the New Deal.

The adrenaline pulses through the book as they travel out West. “The first time you read it, I would say you should read it fast,” said Danielewski. “Otherwise, you might begin to sink into it.”

Sam and Hailey’s physical descriptions prove elusive. Are they white, are they black? It is not clear. “You couldn’t film this book, for they all races,” said Danielewski. “At one point, there is an indication they may be two screaming queens,” meaning two gay men.

As Sam and Hailey go on a collision course through the book from opposite ends, they begin to fall in love. “On the simplest level, I wanted to use the book to describe their relationship,” said Danielewski. “They start far apart, then move closer and closer until at the very middle they see each other accurately, then they move to a greater distance.”

At the end of the book, Sam and Hailey wind up on a snow-covered mountain, both having to make their own heartbre aking choices. For Danielewski, the end of the road has important symbolic value. “In many ways, we are talking about an epic journey,” he said. “It is about the death of adolescence.”

After Sam and Hailey’s wild ride across the country, Danielewski extends this idea to America. “We are at a place in our cultural history,” he said, “where it is time for the United States to mature. The time has come for a greater sense of awareness of the rest of the world.”

Dylan Foley is a writer in Brooklyn, N.Y.
Posted by Dylan Foley at 1:05 PM