Richard McCann on his autobiographical stories in "Mother of Sorrows" 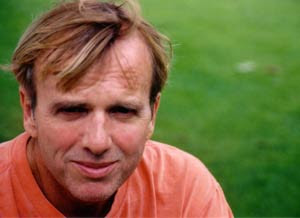 In 1986, Richard McCann’s short story “My Mother’s Clothes: The School of Beauty and Shame” appeared in the Atlantic Monthly, detailing a prepubescent boy’s cross dressing out of his mother’s closet. The story caused a literary stir, and gained McCann, then an unknown poet, a book contract.

Almost 20 years later, McCann’s slim collection of linked stories “Mother of Sorrows” (Pantheon, $20) has finally been published. McCann has created a gorgeous work of autobiographical fiction about growing up gay among the prosperity and bomb shelters of 1950s and ‘60s suburban America. The young narrator’s melodramatic and over-the-top mother holds him under her spell, and the family is plunged into shock when the father dies, beginning the brother’s two-decade downward spiral.

“It’s only been 18 years--I delivered the final manuscript in 2004,” said McCann with mock indignation from a New York City coffee shop. “I’d been writing poetry and I was trying my hand at prose. I was writing what I thought was nonfiction.

“I sent ‘My Mother’s Clothes’ to the New Yorker nonfiction editor. He wrote back and said, “You’ve sent it to the wrong editor. I’ve forwarded it to the fiction editor.”

The contract became a heavy burden. “After the Atlantic, I got a contract for a novel, which I said might be a memoir,” said the 55-year-old writer. “It was a curse initially. I had never written prose, and suddenly people were expecting things. My original idea was to write about 1950s and 1960s suburban life. I was still finding out things about myself as a writer, to what extent could I write big?”

Right after McCann got his book contract, his life was wracked by a series of tragedies. “In 1986, my ex-partner had been living with HIV for two years. My daily life was saturated with AIDS. A lot of my friends were dying and I had a sick partner. The contract was a curse, for I could never decide where my attention should be. At the same time, my mother was going into a nursing home and my stepfather was dying.”

Then McCann’s own life took an almost-fatal turn. “I was diagnosed with Hepatitis C,” he said. “I spent a year waiting for a liver transplant, then another year recovering so I could go to a job. I have not recovered, but like the rest of the people in this coffee shop, I am still here.”

McCann’s real-life mother was a larger-than-life dramatic character. “She was a little too close and a little too distant from her children in certain ways,” he said. “Closeness and distance was constantly going from one extreme to another. As I wrote in the book, my mother seemed to be, in the small stage of the house, getting to enact al l the major parts. The rest were all subsidiary parts.

To capture the mother in the stories, he turned back to his Irish Catholic upbringing. “It was being a writer, trying to capture what it felt like to imagine the mother through the eyes of a child,” he said. “I grew up in a home where both parents were very strong Catholics, where there were a lot of shrines.”

For McCann, that meant making relics. “My aim was to get my mother as you often get people in religious terms--through a strong focus on the fetish objects. There is a powerful Catholic sense that if you want to capture somebody, you have to get a little bit of their reality, a shard of bone from the saint has to go in the alter. You start with my mother’s facts--her jewelry, the clothes in her dresser drawers, her padded brassieres. She wore Cherries in the Snow, a popular red lipstick in the 1950s.

“My mother had a lot of sorrows, she really did. I was very aware of her loyalty to the past, which can take you out of the present in a very painful way.”

In the middle of the story collection, the focus shifts to a fictionalized version of his brother. “My brother was a year older than me and we were both gay. I thought that I would have him until the end of my life. His death was a huge event for me. A parent is your past. A brother is your future. I felt that my future had been wiped out.”

Thou gh McCann had planned to end the stories in the 1960s, he felt the need to address the AIDS epidemic, the AIDS epidemic, which almost wiped out a whole generation of gay men. “[AIDS] became life,” McCann said of the losses he suffered in the 1980s and ‘90s. In the stories, the narrator focuses on a lover’s beautiful hair as the man slips into dementia, or a sweet Filipino man dying alone in a attic apartment in Paris.

McCann has compared “Mother of Sorrows” to his own version of “Long Day’s Journey into Night,” Eugene O’Neill’s epic ode to tortured Irish families.

“It is sort of a joke, but sort of not,” said McCann. “It was my mother’s favorite play. She’d say, “This is what it means to be us,” as an Irish Catholic person. There’s that connection, with Irish Catholicism, where you’re living in the past, but have an ability to live in the present, as well.”

Like “Long Day’s Journey,” McCann’s real and fictional mother's shadow his stories. “Even when the mother is absent, they are still listening to the sounds when she is banging around upstairs,” said McCann. “In some ways, you are even more aware of her offstage than on.”