Jane Fonda on her memoir "My Life So Far" 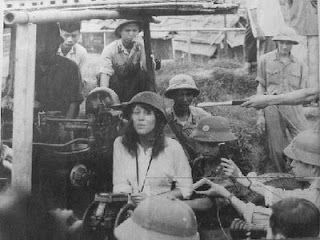 Actress recounts troubles with men and myths of Vietnam

In her epic autobiography "My Life So Far" (Random House, $27), actress Jane Fonda covers a career that spanned 50 movies, from "Barbarella" to "The China Syndrome," to a prominent role as an activist against the Vietnam War and as the entrepreneur who helped launch the aerobics and home-video revolutions with her "Jane Fonda Workout."

"I have become a lightning rod for so many things," said Fonda in an interview from a New York hotel room, going over America's ambivalent relationship with her. "It's complicated. People see me as Henry Fonda's privileged daughter. I was Barbarella. I was a pinup poster girl."

The memoir starts with the horrific suicide of her socialite mother when Fonda was 12 and the cold distance of her movie-legend father. Fonda writes that the destruction of her childhood self-esteem led to a three-decade battle with bulimia and three marriages to powerful and self-centered husbands - French director Roger Vadim, anti-war activist Tom Hayden, and media mogul Ted Turner, whom Fonda divorced in 1991.

In the book, there is fascinating material about making such movies as "Klute" and the closure of filming "On Golden Pond" with her father and Katharine Hepburn. Fonda also addresses her role in the GI anti-war movement and her 1972 trip to Hanoi, where she was photographed on a North Vietnamese anti-aircraft gun.

For the interview, Fonda, 67, was immaculately attired in a white terry-cloth tracksuit and thick-rimmed glasses. The beauty that made her a '60s sex symbol is still intact. The memoir started, she said, as her marriage to Turner was ending.

"When I was preparing to turn 60, I realized that it was the third act of my life," said Fonda. "I was in my last act, and it wasn't a dress rehearsal. I had to go back and see what the first two acts were like. What were the patterns, what were the themes? If I could write about my life clearly and honestly, then I could help other people. I happen to be a celebrity, but it is not a celebrity bio. This is part pedagogic, part social commentary."

Fonda's relationship with her father was very painful. "My father was an icon. He was Tom Joad, Clarence Darrow and Mr. Young Abe Lincoln. At the same time, he was a remote person, who at least for a long period of time was in a great deal of pain, unable to express love or open his heart. As a child, I knew on a nonverbal level that to be loved I had to be perfect. He told me I was fat, that I should wear bigger bathing suits. It took me many decades to recover from that."

Her mother's depression framed her childhood. "My mother was a victim of childhood sexual abuse," she said. "That was key. It informed my mother's life and consequently mine."

Throughout the memoir, Fonda writes honestly about her horrible body image. "In some senses, I was an icon of physicality, sexuality and strength, and all these things," said Fonda. "What does matter is what is going on inside your head."

Fonda's anti-war activism makes for riveting reading. She worked with active-duty GIs who were against the fighting in Vietnam for two years before she went to Hanoi. "This part of history has been written out of the history books," said Fonda. "There was a vast, vibrant movement in the military ranks against the war. Many of the Vietnam veterans were against the war. (President) Nixon said that he was going to end the war, but he was lying to us."

Also cut out from the history books is Fonda's reasons for going to Hanoi. The U.S. government was bombing vital dikes on the Red River Delta. American analysts had projected that 200,000 Vietnamese civilians would drown if the dikes were destroyed.

"I wouldn't have known the importance of the dikes being bombed if it wasn't for the Pentagon Papers," said Fonda, referring to the secret government study of decision-making in the Vietnam War. "(President) Johnson, to his credit, had a chance to bomb the same dikes, but didn't. We were hearing from French and Swedish journalists that we were bombing the dikes. I thought people would notice if I went."

Fonda recounted the controversial photo op as if it were yesterday. "On the last day, I went out to the gun emplacement," she said. "The soldiers sang this song, and the words were translated for me as, 'We hold these truths to be self-evident,' from our Declaration of Independence. I was blown away, and was laughing and crying. I sang a song back. People were laughing and clapping. I was escorted over to the anti-aircraft gun, and I sat down. We were still laughing and clapping. Cameras were clicking. It wasn't until I was walking away that I realized, 'My God, this image is going to look like I was trying to shoot down American planes."'

She shrugs off the excuse that she was roped into a propaganda trick by the North Vietnamese. "I have to take responsibility for this," she said. "I was a grown-up. The image conveyed nothing of who I was, what I was thinking or doing as an individual, but I have to live with it for the rest of my life."

As the memoir starts to climb the best-seller lists, the Internet has been flooded with old stories that Fonda's Hanoi visit led to American POWs being killed by their captors. The stories are false, but they still are circulated.

Fonda is sanguine about the myths. "With Vietnam, the photo was real," she said. "I have to own it, but the 'betrayal' was not real. There are ideologues who need me and this myth of betrayal to promote a right-wing view of the war and the world."

Though Fonda looks great and is in good health, she faces a hip replacement after her book tour.

"It's not from the 'Jane Fonda Workout'!" she said, holding up a mock admonishing finger. "A hip replacement is not my self-image, but it is no big deal nowadays."

Dylan Foley is a freelance writer living in Brooklyn, N.Y.