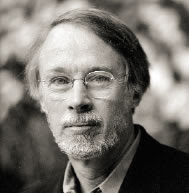 In Charles Baxter’s superb new novel, “The Soul Thief”(Pantheon, $25), Nathaniel Mason is a young, handsome graduate student in postindustrial Buffalo, New York in the early 1970s. He is in love with a lesbian sculptor named Jamie and is sleeping with Theresa, an evasive, sarcastic beauty. Nathaniel also falls in with Jerome Coolberg, a boy genius intent on stealing Nathaniel’s identity, possessions and even his soul.

In a moving meditation on American identity and soul, Baxter takes Nathaniel through a tortured love quadrangle. His love for Jamie is unrequited, as is Coolberg’s love for Nathaniel. Coolberg begins to appropriate Nathaniel’s clothes and personal history, then with the aid of a local junkie steals most of Nathaniel’s possessions. A series of horrific crimes, including rape and arson, follow and Nathaniel suffers a breakdown.

For Baxter, the soul and identity are distinct spheres. “Somebody asked me last week, how do you differentiate a soul from an identity?” said Baxter from an interview at a New York City coffee shop. “I found myself saying that a soul is what we are to ourselves and an identity is what we are to others. Maybe that’s right. You do find that the sense of who you are can be attacked by other people, who would love to impose another idea of who you are on you. Parents do it, spouses and bosses do it.”

The initial inspiration for the novel came three decades ago, when Baxter encountered his own “soul thief.” “When I was in my thirties and was beginning to publish both fiction and poetry, there was a guy I had known who, unbeknownst to me, was claiming to be Charles Baxter,” he said. “He wanted my life at a point when I didn’t want my life. I found out that he was giving readings under the name Charles Baxter. I confronted him and told him, ‘You have to tell people that I exist and that Charles Baxter is not your pen name.’ He followed me around for a while. Later, I met the poet John Ashbery and he said, ‘Oh, you are the man the so-and-so claimed to be.’”

The man who tried to steal Baxter’s identity moved out to the West Coast and has become prominent on the American book scene. “This man is now a pretty well-known literary figure,” said Baxter. “I’m not going to say his name.”

What truly restarted Baxter’s work on “The Soul Thief” was a visit a few years back to Buffalo, where he had done graduate work in the early 1970s. “Buffalo is the way America used to be, where things manufactured,” said Baxter. “I remembered a trip I made to Los Angeles, where the guy who claimed to be me now lives. I thought, this is the place where images are manufactured, where America is in the business of rethinking souls and identities. It’s where people go to become somebody else.

“I thought of a novel that would start in Buffalo and end in Los Angeles, and would be in some sense about the trading in souls and what happened to identity in America.”

“The Soul Thief” is Baxter’s ninth work of fiction. His bestselling novels include “The Feast of Love” and “Saul and Patsy.”

Coolberg’s stripping Nathaniel’s his apartment of almost all of his possessions has a devastating effect. “The things that we have and the rooms we go to are externalization's of our identities,” said Baxter. “What are most precious to me are the people that I have known, loved and lived with, and the rooms that I go to when I use the word home. What if you go back to these rooms and there is nothing, and things that were familial and familiar are gone? It was another way, thematically, to say that Nathaniel is losing everything that he has and everything that he is. There is a way that the story is shifting into nightmare mode.”

What pushes Nathaniel over the edge is Jamie’s brutal beating and rape by young hoodlums, a crime possibly commissioned by Coolberg. Then the soup kitchen where he and Jamie volunteers is burned down in an arson fire. For Baxter, the burning soup kitchen becomes a symbol of the death of the 1960s idealism.

Coolberg seemingly wants to suck the life out of Nathaniel. “Coolberg is a soul vampire,” said Baxter. “There are people around like this. The Buddhists have a phrase for it...’hungry ghosts.’ For some reason, they attach themselves to you and want what you have. When confronted by sociopaths like this, you think, ‘Why me?’”

Thirty years later, after Nathaniel puts his life back together with a wife and two sons in suburban New Jersey, Coolberg reenters the picture. Coolberg is now a famous public radio host in Los Angeles, and wants Nathaniel to meet him out west. Nathaniel, rehashing the painful past that almost killed him, agrees to meet Coolberg in Los Angeles. It is a treacherous meeting.

“The reason Nathaniel goes out there is that for all of us, at a certain point in our life, would like to put the parts of our lives together,” said Baxter. “If you lived through the 1960s and 1970s like I did, that’s quite a chore. We’ve all turned into people that our younger selves would hardly recognize.”

The Soul Thief by Charles Baxter (Pantheon, $25)
Posted by Dylan Foley at 8:40 PM