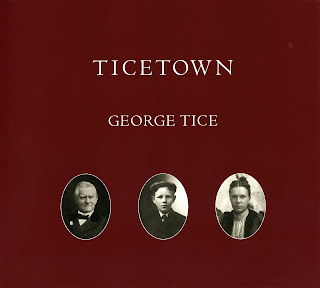 (Originally appeared in the Newark Star-Ledger on August 31, 2008) In more than five decades of work, the photographer George Tice has chronicled his native New Jersey in such now-classic books as “Paterson” and “Urban Landscapes,” recording the factory rustbelts and the small-town Jersey character now almost wiped away by big-box chain stores.

Tice had always assumed that he had no connection to an area once called Ticetown that straddles Monmouth and Middlesex counties, until a foray into his family genealogy showed he was related to a family that settled in what is now Marlboro in 1709, meaning that the photographer is an 11th generation American and a 10th generation New Jerseyan. Out of this discovery, Tice created “Ticetown”(Lodima Press, $60), which explores the Tice family history through glorious black-and-white photography of collapsed farmhouses, fallen apples and a ruined church, mixed with historical photographs and family letters. In the book, Tice focuses on the death of a young boy, Ervin Tice Jr., at the turn of the century, and his mother Dorcas’ inconsolable grief.

Tice, 69, was raised in Newark and as a child worked as a peddler across the United States. He is the author of 17 books, including “Common Momentos,” a monograph of New Jersey photographs also published this year. Tice spoke with freelance writer Dylan Foley by telephone from his home in the Atlantic Highlands area.

Q. How did the work behind “Ticetown” start?

A. After a fellowship in 1991-92 in England, I was determined to research my genealogy. My father knew almost nothing about his family. He knew up to his grandfather. If you know your genealogy, you accept your history. When I got it down that one of my ancestors arrived in New Amsterdam in 1663, that gave me a kind of status.

Q. You chronicle a lost New Jersey of farms. Was it hard to find photographic subjects for the book?

A. I remember when the whole area was undeveloped and just farmland. Now there may be just three farmlands left in the area. If you go to Ticetown, it is pretty much suburbia. I was very limited in my subject matter, but fortunately there was Dorcas Tice’s archive that was still in the attic of a nearby house and there was the churchyard and the church steps. I was wondering if I could really go back into the past. I found out that I could with newspaper clippings from the period and letters. There is a letter from Dorcas where she writes her aunt that she is marrying a man named Ervin Tice. She doesn’t mention that the man is her cousin.

When I photographed the Homestead, the family farmhouse, in 1994, it was so rickety. There was a danger of it collapsing at any time. When I went back there later, a neighbor had said it collapsed during a storm.

Q. Would you say the pastoral “Ticetown” is a much more personal work than your gritty urban books like “Paterson” and “Urban Landscapes”?

A. It is definitely more personal, but it is not a departure from New Jersey. Most of my books are about New Jersey or New Jersey subjects. This book is about the passage of time, the decrepitude of everything, from the broken steps of the church to wedding photographs left in a barn, to the collapse of the family house.

Q. How did you address Dorcas Tice’s lifelong grief over the loss of her son Ervin Tice Jr.?

A. There are happy times, like the wedding photos in the book, then Dorcas’ only son dies at 13, and the mother never got over it. When I found the photo of Ervin Tice Jr., I thought he was the All-American boy. He looked like James Dean. What promise he had, excelling at everything he did. The picture had silvered over. I had to restore the picture by taking automobile rubbing compound with Q-Tips, removing all the oxidized silver.

Q. You’ve had an impressive several years of work, publishing “Paterson II” in 2006, two books this year and are reissuing your book “Seacoast Maine” with revamped photography. Why are you so productive now?

A. I’m approaching 70. At that age, you begin to think of mortality and unfinished business. I had read Somerset Maugham’s “The Summing Up” 30 or 40 years ago. I reread it recently. I’m doing my own kind of summing up. After 55 years of work, I am still ambitious.

(Copies of “Ticetown” may be ordered from the Lodima Press at www.lodimapress.com)
Posted by Dylan Foley at 9:00 PM