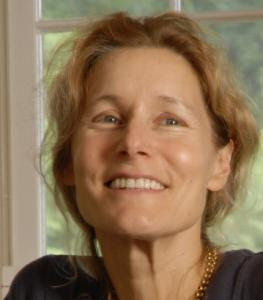 (Originally published in the Star-Ledger in September 2007)

In Irene Dische’s new autobiographical novel “The Empress of Weehawken”(FSG, $24), the writer channels the memoir of her own grandmother Elizabeth Rother, a proud German woman with an aristocratic background, who saved her Jewish husband from the Nazis, faced down the Gestapo, subscribed to her own anti-Semitic views and wound up as a poor refugee living in New Jersey for five decades after the war.

This incredibly witty, beautifully written novel is narrated by the ever-complicated Elizabeth, whose true infatuation is with her rebellious daughter Renate, a coroner who marries an eccentric German Jewish scientist, and the further adventures of her wild child granddaughter Irene Dische, very closely based on the novelist, who runs away from home, takes a dangerous trip through Turkey and Iran, bums through Europe and winds up living in Berlin. The always critical Elizabeth bickers with her husband Carl, is often rescued by her loyal German housekeeper Liesel and looks down her nose at most everyone. “The Empress of Weehawken” is a potent stew of class, sex and religion, as well as cultural and generational clashes, and Dische crafts a glorious misanthrope in her fictionalized version of her grandmother Elizabeth Rother.

Dische, 55, was born and educated in New York City. She is the author of “Pious Secrets,” “Sad Strains of a Gay Waltz” and the story collection “Strange Traffic.” Dische has lived in Berlin since 1980, and also has a house in Rhinebeck, N.Y. She spoke by telephone with freelance writer Dylan Foley from Fort Lee.


Q. Are you calling from the family mansion, where the real Empress of Weehawken lived?

A. Yes. The house is really in Fort Lee. I was going to put it in Hoboken, then it became Weehawken, to protect the innocent, as they say.

Q. How did your autobiographical novel evolve?

A. It's based on the family. Of course there are some lies, but by and large it is true. My youth between the ages of 15 and 19 had been pretty wild. My children had always been bugging me about the stories. I told them I would write it down when they are old enough enough because I didn't want to give them a bad example. At some point, they were old enough, so I started writing. I was making myself heroic and prettying myself up. I needed an independent witness, to write my autobiography. I had had a very difficult relationship with my grandmother, who was very critical of me. She had been dead 20 years, but she said yes. She got pretty carried away with herself, so that is why the book turned out they way it did. The original title was going to be "The Biography of Irene Dische." I was going to try to publish it under my grandmother's name.

Q. Your grandparents were very complex characters. Your Jewish grandfather, as a protected "honorary Aryan" refused to perform sterilizations and got in trouble with the Nazis, and your grandmother routinely faced down the Gestapo, refusing to divorce her Jewish husband before she left Germany in 1939. They both were anti-Semites. Could you describe them?

A. My grandmother was an anti-Semite, but she didn't act like one. She believed all that, but then again she didn't. It didn't rhyme with her Catholicism. She was also very courageous. She was stubborn. She wasn't going to let the Nazis push her around. She was angry that they pushed her husband around and she saw it as a sign of weakness on his part. My grandfather was actually the most difficult person in the family. He was the worst anti-Semite of all. In the book where he said, "The Jews deserved it," I remember him saying that.

Q. Their fall from the high social status they had in Germany made your grandparents bitter. How did this affect their world view?

A. Under the Nazis, they were socially devalued. Even though they had no social rights, they still saw themselves as middle class. When they came to the United States, they were poor. It hurt my grandfather in particular. He came from a lower-class family. He was upwardly mobile and had married an attractive woman. My grandmother had an easier time of it. She already had status. When she lost it, she didn't feel like she was nothing.

Q. How did you wind up expatriating to Germany?

A. As a young woman, I had been in some dangerous situations. I had been to Libya during the revolution in 1969. There was one dangerous place left to me and that was Berlin. I went there in my late 20s. I used to lie about my background. They would ask my why I spoke German. I'd say my parents were German. If you said they left in 1939, they'd know you were Jewish. I'd lie and say they left in the 1950s. I met a man and had children. His family was German bourgeoisie. I'll tell you a little story. My father's mother was murdered by the Nazis in a town called Lemberg (now Lvov), in the Ukraine. My father-in-law had been a defense attorney at the Nuremberg trials. He had made a career out of being the only German lawyer who wasn't in the Nazi Party. It was a big deal. He was the lawyer for Jewish intellectuals and was on various committees for Israel. When he died, we discovered it was a lie. He had been in the Nazi Party. In fact, he was in a division of Nazi soldiers at Lemberg during the exact same period my grandmother was killed. I had always thought there was something wrong with his story.

Q. “The Empress of Weehawken” was a bestseller in Germany last year. What part appealed to the German reader?

A. It sold 500,000 copies, even with the bad title “Granny’s True Stories.” Elizabeth’s honesty appealed to the Germans. They found her funny and it was a relief to them that they found something funny. Probably a lot of people in her generation talked that way. Sixty percent of the people who came to my readings were men between the ages of 45 and 60. They probably knew women like my grandmother.
Posted by Dylan Foley at 8:26 PM