Abraham Verghese on Ethiopia's War-Torn History in "Cutting for Stone" 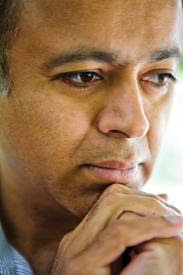 In 1994, an Ethiopian-born doctor named Abraham Verghese published a breathtakingly beautiful memoir called “In My Country,” about dealing with the AIDS epidemic in a small Tennessee town. A second memoir titled “The Tennis Partner” followed, establishing Verghese’s impressive literary reputation.

Now Verghese has published “Cutting for Stone”(Knopf, $27), an epic novel of his native Ethiopia. Twin boys are born in 1954 to an Indian nun who had an affair with a tortured British surgeon. When the mother dies in childbirth and the father flees Africa, the twins Marion and Shiva Stone are raised and loved by two Indian doctors in Addis Ababa on the grounds of an overwhelmed mission hospital providing care to the impoverished community, and where Marion becomes bewitched by the medical world. Marion’s harsh betrayal by Shiva over a woman and the impending collapse of the Emperor Haile Selassie’s brutal regime forces him to go abroad to a rough inner-city New York hospital during the 1980s crack wars, where a thin red line of foreign doctors try to hold back medical catastrophe. A medical emergency then forces Marion to confront his absent father and brother. In his exhilarating debut novel, Verghese melds the turbulent, tragic history of Ethiopia with the passion of a young doctor for the humane practice of his craft.

Verghese, 53, was educated in Ethiopia and at the Iowa Writers Workshop, and is a practicing internist at the Stanford University School of Medicine. He spoke by telephone form his office in Palo Alto, California, with freelance writer Dylan Foley.

Q. Your lifetime aspirations to write fiction were delayed by two successful memoirs. How is it different writing fiction?

A. My two memoirs were a good diversion because they were compelling stories. Returning to fiction has been lovely. One of the liberating things with fiction is that you are not confined to what happened. The great difficulty in making things up is you don’t have the reader’s inherent interest in a story they would know is true. You have to work so much harder to get them to suspend their disbelief.

Q. Did you set out to write a sweeping tale of both Ethiopia and medicine?

A. I did set out to write an epic medical story. I would have all of medicine in it if I could. The analogy I use is of the French writer Emile Zola. His novels had all of Paris in them. Nothing was left out. I wanted to capture all of medicine, the romance of being a student, and the contrast of poverty situations in medicine and upscale medical environments. I wanted the book to grab the reader in the same way that certain books brought me to medicine.

Q. Did your family history as Indian immigrants to Ethiopia and your own path to becoming a doctor influence the novel?

A. I took a lot of liberties and I made up a lot of things, but I did use a geography that I knew well, and I used the time periods I knew well by being a similar age to Marion. Otherwise, it is completely not autobiographical. My medical pet peeves, the things I celebrate and don’t celebrate, are in there.

Q. Addis Ababa, the capitol of Ethiopia, is so richly drawn that it becomes a character in the novel. What was your process for illuminating your native city?

A. It wasn’t difficult. Even though the images may seem exotic for American readers, these images were as commonplace for me as Sesame Street would be for someone here-- the maid and the guard at hospital gate, the contrast of expatriate life and the normal functioning of the Ethiopian lower-middle class. All I had to do was hark back to the characteristics of people I knew. They emerged as composites, but then became real for me.

Q. Through the novel, Marion compares his personal baggage to the parable his stepfather told him about a pair of ratty slippers that an old man can’t seem to discard. What interests you in these slippers as a metaphor?

A. Maybe its because I am at an age where I am looking at things I’ve done. You may look harshly at your stupidity, the terrible mistakes and tragic choices you’ve made, but they nevertheless led you to the next thing in your life. They are you. It’s your karma, and it’s acknowledging that your karma has included all these things, as well as an old pair of slippers. The slippers are yours.
Posted by Dylan Foley at 1:46 PM

It's a cross-cultural family saga, and though the author's heritage is blended, he tells his tale in such clarity that I felt I was there with him through each event. I was thankful for his validation of good medical practice despite shortage of resources. I keep having to remind myself that it's a piece of fiction.