From Studs Terkel, a Book About Death That Becomes A Celebration Of Life 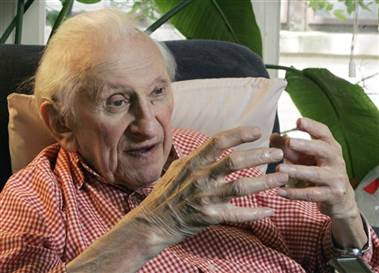 (Originally published in the Hartford Courant on October 21, 2001)

|By DYLAN FOLEY
WILL THE CIRCLE BE UNBROKEN? REFLECTIONS ON DEATH, REBIRTH, AND THE HUNGER FOR A FAITH
By Studs Terkel, New Press, $25.95, 407 pp.)

Studs Terkel is the dean of American oral history, with his classic books ``Working,'' on Americans and their jobs, and ``Hard Times,'' on the Great Depression, setting the standard for first-person narratives. In ``Will the Circle Be Unbroken?'' Terkel tackles American views on faith and death. Doctors, firefighters, mob enforcers, ministers: Terkel interviewed these people and many others on death, but pulled off a celebration of life and memory.

``This book is ostensibly about death,'' says Terkel from his home in Chicago. ```Will the Circle Be Unbroken?' is an old hymn. I think the `hunger for faith' is key. It's a paradox, but it is my most-alive book.''

Terkel is a hale 89 years old with a shock of white hair. His only concession to age is a hearing aid. ``My doctor advised me to do this book,'' says Terkel, as he lit a long cigar. ``The subject of death has to be discussed when you are in good health. The only time we talk about it is when somebody is dying: out of grief, out of guilt, out of fear.''

For his book, Terkel interviewed 63 believers and nonbelievers of all races and professions, searching for the answers to faith and the afterlife. There is Karen Thompson, a grad student and Buddhist, who spent two years in a coma, where she went over her previous lives. Then there is Hank Oettinger, a retired printer from Chicago, who has been an atheist from the time he was a child.

Terkel revisits some of his favorites from ``Working,'' like Kid Pharaoh, the loan shark's enforcer, who demands to be cremated at death: ``I am against burials because I believe that funerals are barbaric. Loading a guy in a box with a necktie is the most barbaric thing in this century.''

On his own spiritual beliefs, Terkel hedges his bets. ``I'm an agnostic, which is really a cowardly atheist ... I want to cover all the bases,'' he says.

Soon after Terkel started his new book in 1999, his wife of 60 years, Ida, died. Terkel met her during the Depression, when he was a government researcher. ``I saw this attractive woman in a maroon smock,'' says Terkel. ``I married her for her money; she was a social worker making $125 a week. I was only making $85.'' Ida Terkel was an activist, always at the center of demonstrations. In Terkel's house, on a sideboard, there sits a picture of Ida as a stately elderly woman, pumping a radical fist in the air.

The stories in ``Circle'' are contemplative and beautifully crafted. Some are witty and others are quite gripping. There is Randy Buescher, a carpenter allegedly dying of a virulent cancer, who refused to leave his 3-year-old daughter behind. ``What kept Randy alive?'' asks Terkel. ``Humor, laughter and the need to live for his little girl.''

Or there is Dmitri Mihalas, a physicist battered by depression and several suicide attempts. ``We make a choice: every day of our life, we can choose to live or die,'' says Mihalas. ``I know people who are 30 years younger than I who are dead. Death hasn't come to them yet, but they gave up. It is terrible to see.'


Readers meet Matta Kelly, a former drug addict and prostitute who became an HIV caseworker. She recounts how she had to fight hospital officials to allow a client of hers to have a dignified death. ``Norma Saunders is dying of AIDS,'' explains Terkel. ``She is really a man, a transvestite. The hospital workers were laughing.'' Kelly fights to take the dying Norma off life support.

``What did Matta want? She wanted Norma to die with dignity,'' says Terkel. ``She's a person who behaves decently in an indecent world.''

Some of Terkel's subjects find the beauty of life in the most terrifying moments. There is the story of Bob Gates, an NYPD emergency services officer who once grabbed a man trying to jump off the World Trade Center. Both men were suspended and struggling, kept alive only by a rope held by Gates' fellow officers. ``I grabbed him in a bear hug and we swung over, up on top of the World Trade Center,'' says Gates. ``Besides being dangerous, it was such a beautiful sight ... At a hundred and ten stories up, the East River is only a half-inch wide.''

Terkel compares his oral histories to digging for gold. ``I am a gold prospector,'' he says, his eyes narrowing. ``Gold diggers come up with a ton of ore. I come up with 30 pages. A gold prospector has a filter ... I come up with a handful of gold dust. Now here's the delicate part: the cutting, the editing. It highlights the truth. If I ever do it in a way that distorts his truth, her truth, the book's no good.''

Terkel admits that he is addicted to recording people's stories. ``There's only one other guy as enamored of tape recorders as me. Who is that? Richard Nixon! I tape, therefore I am.''

In one of the most devastating interviews in the book, Terkel speaks with the mother of Emmet Till, the 14-year-old black boy murdered by white racists in Mississippi in 1955, a crime that galvanized the civil-rights movement. She talks of examining her son's tortured and mutilated body. ``I spoke to Mamie Mobley 45 years after the incident,'' says Terkel. ``She saw his face was scarred. What was she thinking of? She saw the stigmata of Jesus! The kid was crucified.''

In her grief, Mobley hears a voice: ``The spirit spoke to me and said, `Go to school and be a teacher. I have taken one, but I shall give you thousands.''

``I couldn't end the book this way,'' says Terkel. Instead, he used a hopeful tale of two mothers, lesbians who had been impregnated by the same gay doctor, who gave them sons. Eleven years later, he was dying of AIDS. They met and fell in love, forming a new family. ``You've got the homophobes screaming `Family values, family values!''' says Terkel. ``Here is the greatest family value: love!''

Working on ``Will the Circle Be Unbroken?'' helped Terkel deal with his wife's death. ``The book was a palliative beyond description,'' he says. Ida is still a presence in the house. Her urn sits on the windowsill, near the daisies she loved, and he still talks to her. ``I may be a nonbeliever,'' says Terkel, ``but I certainly do believe in memory.''

Terkel has two new book projects, one on musicians and the other on hope, titled ``Hope Dies Last.'' ``I'm not going to finish either,'' he says, with a chuckle, ``but I like the journey.''

Dylan Foley is a free-lance book critic who lives in Brooklyn, N.Y. He wrote this article for The Courant.

Labels: Studs Terkel, Will the Circle Be Unbroken?