Amitav Ghosh on the 19th-Century Opium Traders in China 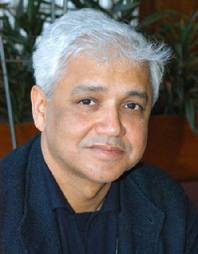 In his new epic novel, "River of Smoke" (FSG, $28, 522 pp.), writer Amitav Ghosh explores the 19th century community of American, British and Indian opium traders in the foreign quarter of the Chinese city of Canton. The year is 1839 and the Chinese government finally has started banning the addictive drug that has made numerous addicts countrywide and assaulted Chinese civil society.

Canton is a freewheeling city, where foreign merchants mingle easily with the Chinese residents. It is a town of art and culture, where vice can easily be found and merchants communicate in a local pidgin mixture of Chinese, English and Indian languages. As the Chinese officials move to confiscate the opium, the traders, including a Bombay merchant named Bahram, are faced with ruin if the British and American navies don’t intervene. "River of Smoke" is the second book in Ghosh’s trilogy on Britain’s two Opium Wars against China. Ghosh has crafted a masterwork of historical fiction, capturing the lost city of Canton and exploring how these colonial wars brought China to its knees. Through meticulous research, the use of primary documents and gorgeous writing, Ghosh captures the opium culture of 19th century China and India.

Ghosh, 55, met with freelance writer Dylan Foley at a café near his home in Brooklyn, N.Y. Q. How did you fall into writing about the obscure Opium Wars of the 19th century?

A. I got into it through the indentured servants. My first book in the trilogy was about Indians leaving India to enter the coolie trade. In my research, I found this narrative of opium. In India, we are not taught about the Opium Wars. Until my book "Sea of Poppies" came out, most Indians and even Indian historians were unaware of the importance and extent of the opium trade.

Q. The opium trader Bahram is a generous, charming man, who trades in a drug that has made hundreds of thousands of Chinese addicts. Does he have any moral qualms over doing this?

A. I realized that people like Bahram have two axes of conflicting morality. One of these axes is that he is doing everything for his family, for his children. The opium traders were also incredible philanthropists in India. In Bombay, half the hospitals were built by opium traders.

Q. Do you see any parallels between the Opium Wars and the modern drug wars in the United States and South America?

A. I was in Brazil recently and it is so striking when you travel around South America and you see the drug trade destroying societies. The United States is being ripped apart by its own war on drugs. Nineteenth-century China was the first country to deal with mass addiction, which was engineered by the British and Americans, as a way of reversing its trade imbalance.

Q. What was the colonial trap the Chinese fell into?

A. It was essentially a military trap. China did not have the ability to resist the Americans and the British. The Chinese response to the opium epidemic was exemplary. They set up commissions, they considered legalization. They realized that their only choice was to ban it, so they sent in Commissioner Lin to end the importation of the drug. The British defeated the Chinese in battle and continued importing opium. It is one of the biggest crimes in history. The toll in terms of lives may be as high as 120 million, in terms of addicts and people killed.

Q. In the novel, you use an amazing range of English dialects and patois. How did you write the dialects?

A. It took a lot of research, but it’s the kind of thing that interests me. I spent much of my childhood in Sri Lanka, where we basically spoke a kind of pidgin English. I love pidgin and Creole dialects. I find it quite pleasurable to work with them.