Darcey Steinke on Religious Faith and Loneliness in "Milk" 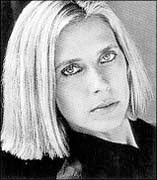 As she is about to leave her husband, Mary sees small sparks in the air above her head. Is it a religious visitation, the effect of stress and exhaustion from taking care of her new baby or the onset of mental illness? She begins an ambivalent affair with John, who left his religious order to find carnal love. Though it has few sex scenes, the novel is permeated with sensuality, from the snow falling past a church window to a character’s craving for closeness with God.

The daughter of a Lutheran minister, Steinke, 42, was educated at Goucher College in Maryland and the University of Virginia. She has written three earlier novels, and two of them, “Suicide Blonde” and “Jesus Saves” generated much controversy for their honest, brutal sexual content as they became literary bestsellers. Steinke teaches at the New School University in New York City, and lives in Brooklyn with her daughter, where she spoke with freelance writer Dylan Foley.

A. I’ve been working on “Milk” since 1999. After “Jesus Saves,” I was going to write a huge historical novel about my seventh great grandfather William Miller, who founded the Seventh Day Adventist Church (in the 1860s). I wrote 200 pages, then got stuck. I was having my own issues on being closer to god. I was going to write this quick, little erotic novel, because I always enjoyed writing about sex. I wrote a thousand pages, and never thought I was going to finish it. I knew the narrative had things to teach me. I knew for the feeling of it, the loneliness of it, that it couldn’t be that long. You can’t really write a 300-page book about loneliness. I kept restructuring it and taking parts out.

Q. What interested you about Mary and her new motherhood?

A. I’ve never really seen any literature about breast-feeding or new mothers that is well done. I’ve read cliched things about new motherhood, but never anything about the oddness of it, the sci-fi-ness of having a new baby. It’s like having a creature from outer space, with these huge eyes. In literature about motherhood, babies in particular are sentimentalized, and the rawness of it is not dealt with. I wanted to write about that.

Q. Why did you decide to integrate religion and erotica in your novel?

A. In early drafts, the book was very sexy and it just didn’t stick. I realized that whether it was sexual longing or longing for God, it was really the same thing. All longing comes from God, whether it is physical longing or mystical longing.

Q. Often society keeps sensuality and religion divided. How do you view this divide?

A. It is a cultural divide. I don’t think that there is any part of life that is outside of God to me. I don’t think they’re separate. People might think that a man having sex in an alley or a woman committing adultery might be outside of God’s faith, but I don’t think that is true. I think it is sad that for conservative Christians and Catholics, they make it seem like God is not with you during an abortion or a divorce or afterwards, but of course God is with you. It is just a religious-cultural construct that He or She is not.

Q. What has been your own religious path?

A. I lost interest in religion when I was around 16., and all through my 20s I was kind of cynical. My parents had a bitter divorce. I thought there was no need for religion. I don’t think God lost track of me, but I wasn’t that close to God. Having my daughter changed everything. Childbirth is so moving, where the pain brings on this new life. It is a visceral instruction.

Q. When “Jesus Saves” was published in 1997, you were slammed for being a Christian while writing about things like sexual abuse. What happened?

Q. Mary sees sparks in the air above her. Did you see it as a mental breakdown or religious visions?

A. You know how it is when you have a baby and you are so exhausted. When my daughter was a baby, I thought to myself, “This is it. If its going to happen to me, it’s going to happen to me when it is 4 a.m. and I still haven’t slept.” I was interested in the idea of such a state of exhaustion and vulnerability that you could have a vision. I also felt like my part of the hindrance to my own spiritual life was the idea of miracles. I thought of it in very finite, like something magic happening. It has taken me a long time, but I do believe that incredible things do happen, but not in the movie way.

Q. You write beautifully about sex. How do you use it is your novels?

A. My main feelings about writing sex scenes is that they are integral to the themes of the things you are writing. If you are not writing a sex scene that is integral to the book, that moves the story along, then it is kind of like pornography. In the actual writing of sex, for me it is that the characters carry their humanity to bed with them. That’s what is beautiful about sex. There is that weird mix of interior and exterior, that you move with someone towards oneness. It’s a spiritual endeavor, really.

Q. You are have a good relationship with your minister father. Does he read your books?

A. He always reads my books. He read “Milk” and liked it. With the sex scenes, he says he has to read them real fast or he skips over them. He’s my dad. It’s hard for him to see my books as just books.