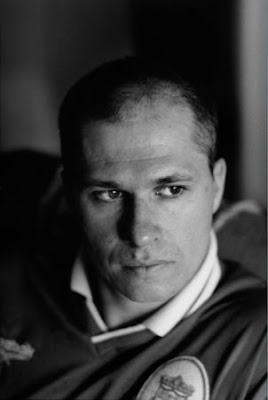 In Aleksandar Hemon’s beautiful novel, “The Lazarus Project”(Riverhead, $25), a young, unarmed, 19-year-old Jewish immigrant in Chicago named Lazarus Averbuch is shot and killed by the chief of police. Anarchist hysteria explodes in the city and his sister Olga is hounded by the police as she looks for the truth. Hemon takes the real story of Lazarus and weaves it together with the tale of Vladimir Brik, an isolated Bosnian writer living in Chicago a hundred years later.

Brik goes on a road trip through the scarred lands of Moldova, Ukraine and Bosnia, looking for the roots of Lazarus’ life and the horrific anti-Semitic pogrom that formed him. Brik brings along a Bosnian photographer, a liar and war veteran, and two men encounter mobsters and prostitutes. As they travel, Brik’s life, marriage and sense of self unravel. Mixed with historical photos of Chicago and contemporary shots of Eastern Europe, “The Lazarus Project” is a sad, darkly humorous meditation on the scars of war, identity and immigrant isolation.

Hemon, 44, arrived in Chicago in 1992, right before the savage wars engulfed Bosnia and the rest of the Balkans. He is the author of the story collection “The Question of Bruno” and the novel “Nowhere Man,” and has won prestigious Guggenheim and MacArthur grants. Hemon spoke with freelance writer Dylan Foley at a bar in New York.

Q. How did you find the story of Lazarus Averbuch?

Q. Somebody gave me a copy of “An Accidental Anarchist” by Walter Roth and Joe Kraus. I read it. The clincher for me was the photo of the dead Lazarus, with a police captain holding him up. Lazarus escaped a pogrom in what is now Moldova, only to be shot by the chief of police seven months later, killed by law and order. The American dream, to put it mildly, did not work out for him. The photos are amazing. There is this extraordinary cruelty of showing this dead boy to the public. Through my research, I found that they exhibited his body in the morgue. The police confronted Olga with the body of her dead brother without telling her he was dead, to shock her into some sort of confession. That would not constitute torture, mind you.

Q. Why did you mix an immigrant murder in Chicago in 1908 with a modern immigrant story?

A. I can’t remember the exact process, but at some point, I realized that I couldn’t just write an historical novel where you have costumed people and a sufficient amount of plausible detail. I don’t think that you can write about the past without examining ways of engaging with that past.

Q. Why did you integrate historical photos of Chicago and contemporary photos of Eastern Europe in the book?

A. I really wanted to have the photos of Lazarus in the book. They had to be seen. There’s a photo of Olga, this remarkable woman, standing tall. I wanted to preserve the reality that the characters were moving through.

Q. Both Brik and Lazarus experience the searing isolation of the immigrant. In his tour through the Ukraine, Moldova and his native Bosnia, Brik is on the verge of a breakdown. What does he experience and what is the reality of those three countries?

A. The farther he is away from Chicago, the more unreal his life becomes. The practices that maintained his life in Chicago are no longer applicable. Brik’s tour is heartbreaking. In Moldova, a quarter of the population is abroad, doing menial jobs in Europe. In western Ukraine, everyone has a family member working abroad, and in Bosnia, a quarter of the four million people are displaced. Displacement, economic or otherwise, is the central fact of everyone’s life. The infrastructure, which creates stability, is gone. Wherever you come from, it is hard to leave that place behind. If you come here as a refugee, it is very hard. My parents left Bosnia before the war, and have recovered, but they have an enduring sense of loss. They have a house in Ontario with a backyard. They don’t weep every night, but the loss is indelible.

The metaphysical costs of displacement, the instability of immigrant life, are in all my books. You can ask, who am I? That is too easy. The question really is, what constitutes me? Everything around you reinforces your identity. When there is war or another displacement, you question yourself and ask, what is it that makes me into the person I am?

(This interview originally ran in the Newark Star-Ledger in May 2008)
Posted by Dylan Foley at 4:57 AM