In Praise of Grouchy Women: Elizabeth Strout on "Olive Kitteridge" 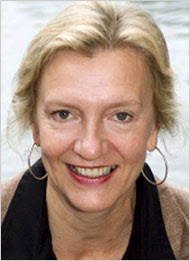 (This interview appeared in the Newark Star-Ledger in March 2008)

A year after I interviewed Elizabeth Strout, she won the Pulitzer Prize for Literature. Here is our conversation:

In her masterful third book, “Olive Kitteridge: A Novel in Stories”(Random House, $25), Elizabeth Strout introduces her memorable title character, a tough math teacher in the small town of Crosby, Maine, who suffers no fools and speaks her mind at almost all costs.

In 13 exquisite stories told from Olive’s perspective, her neighbors, family and former students, readers will see the formidable woman evolve over 40 years of her life, as her notions of family and community are battered. Olive goes from being a town pillar who strikes fear in the hearts of adults and children alike, to a woman suffering major setbacks. Olive is a complicated soul and has her own problematic love for her mild-mannered pharmacist husband and the son she smothers. Though she tramples on the feelings of others with her uncompromising honesty, she is capable of great nuance and understanding, and her influences are felt by her former students. When Olive’s life changes through her husband’s stroke and her son leaving Maine, she gains a new perspective on her world and a surprising chance at romance with an unlikely Romeo.

Strout, 52, was raised in a small town in Maine, and received her law degree from Syracuse University. She is the author of the critically acclaimed novels “Abide with Me” and “Amy and Isabelle,” is the mother of a grown daughter and lives in Manhattan. She spoke with freelance writer Dylan Foley at a coffee shop near her home.

Q. Where did Olive come from?

A. I grew up in a small town in New England. Olive is a certain kind of woman who never feels the need to apologize, who doesn’t feel the need to qualify what he or she says or feels. They get this carte blanche on being honest. There are people hurt by this. It is almost a childlike disregard for people’s feelings, but at the same time there can be a deep perception of people’s feelings, if they are not close to them.

Q. Why did you decide to write “a novel in stories,” following Olive through 13 tales?

A. A number of years ago, I had my first Olive episode. She would come to me at different points and I came to feel her as an intense presence on the page. I thought it would be difficult for the reader to be with Olive nonstop as in a novel.

Q. Olive has moments a grace and compassion, such as when she tries to save the life of an anorexic girl. Where do these moments come from?

A. I think of Olive as having access to broader ideas than the larger community. She is physically, psychologically and emotionally larger than the people she lives among. As a result, she has the ability to see aspects of the human condition that other people don’t see. Her husband and her son are her Achilles’ tendon She’s blind in these circumstances. When she is not invested in the relationship, she can use her perception to say, “This girl is starving herself to death. This boy is in pain.”

Q. Could you tell us about small town life and how someone like Olive fits in?

A. I grew up in a Harpswell, Maine, and Durham, New Hampshire. They were pretty claustrophobic. For someone like Olive, it’s comforting. She has generations of ancestors who have lived there. She’s from that earth and she’s invested in the geography. Olive is not bothered by the claustrophobic aspect of a small town, for that’s what she is used to and that is what she wants. When she comes to New York, it is like dropping her in Southeast Asia.

Q. Olive has some rude shocks to her world--her husband suffers a paralyzing stroke and her son refuses to come back to Maine. How does this affect her?

A. Not unlike many people, things don’t turn out like Olive thought they would. Her son leaves. She can be angry about this for a while, but it is not going to make him come back. Even her best friend gets on her nerves. She really finds herself alone, but she is a survivor. Olive leaves the wreckage in her wake, but she’ll manage. At the end of the book, with a romantic interest, she understands that she has a shot at life again.

Q. Olive meets her match when an elderly acquaintance Louise, a woman whose life is destroyed by her son’s murder of a local girl. She draws Olive in for some verbal abuse. Where did you find Louise?

A. I don’t quite know. Sometimes on the street, I’ll see someone and will remember them. A few years ago, I saw this incredibly thin, beautiful elderly woman. The image of her stayed with me. There is always the story of someone committing a heinous crime, something unexpected, like dead prostitutes buried in the backyard. Louise is the mother of this person.
Posted by Dylan Foley at 11:11 AM