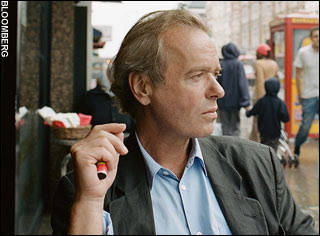 (Originally published in the Newark Star-Ledger in February 2007)

In 2002, the British novelist Martin Amis published his political history and memoir titled “Koba the Dread,” which covered Joseph Stalin’s forced famines and terrors that killed 20 million in the Soviet Union, and Amis’ own dabbling in Marxism with other members of the British intelligentsia. Amis has now revisited the atrocities of Stalin in his book “House of Meetings”(Knopf, $23), a small, beautifully crafted novel set in the postwar gulags of Russia.

Framed as a long e-mail sent the the unnamed narrator’s daughter, “House of Meetings” chronicles the struggles of two brothers to survive Stalin’s slave labor camps near the Arctic Circle for more than a decade after World War II. The narrator is a war hero who raped his way through Germany with the victorious Red Army in 1945. His younger brother Lev is a poet and pacifist. Together they fight through the macabre hierarchy of the camp, including the urkas (hereditary criminals), the bitches, the snakes and the pigs. Lev is married to Zoya, a woman who the narrator openly lusts for. While Lev is a prisoner, Zoya makes a week-long trip to meet him at the House of Meetings, a shack where good prisoners are allowed conjugal visits by their spouses. The brothers survive the camps, but are broken in very different ways. “House of Meetings” is a grim and witty story of what the gulag did to two brothers and how the prison camps’ legacy is still killing Russia today.

Amis, 57, was educated at Oxford University. He is the author of 19 books, including the acclaimed novels “Time’s Arrow” and “London Fields,” and lives in London with his wife and two daughters. Amis spoke with freelance writer Dylan Foley by telephone from California.

Q. Why did you write “House of Meetings” after you’d already written the nonfiction “Koba the Dread” on Stalin’s atrocities?

A. “Koba” was a kind of primer. I was giving myself a political education. I didn’t plan this novel. As it often happens, something trickled down into my consciousness. I found I had more to say and I needed to say it in fiction.

Q. What was the first part of the novel that came to you?

A. The first I knew of it was two brothers in the postwar gulag. One brother was going to be young, a poet and a pacifist. The other was a war veteran, who had once been a sensitive young man, but was now hardened and brutalized. That was the crux of it. The love triangle came later.

Q. How would you describe the evolution of the narrator?

A. He was much nicer in the first draft who was telling the story of his brother. He became a much more central character, and the love triangle solidified.

Q. They both have love for Zoya, a Jewish intellectual, but the brother is haunted by four decades of unrequited love. How do you explain his jealousy?

A. The older brother is in a very Russian position. I would ask myself, “Is his position coherent?” Then I’d say, “C’mon, he’s Russian. It doesn’t have to be coherent. It has to be a bit perverse and left field.” His position is he wants to keep his brother alive in the camps. That’s pure instinct. On the other hand, he wouldn’t mind if Lev died, for then he’d have a shot at the girl.

Q. Could you describe the feral environment of the camp?

A. The gulag was once an enormous absurdity, but it was also a coherent world. and this was the shape that the prisoners got pushed into, a desperate adaptation of an absurd reality.

Q. How did you build Zoya as a character?

A. She created herself because she had to be certain things-- she had to be both vulnerable and sensual. A couple of reviewers in Britain have called her a male fantasy figure, but that’s because she’s pretty. The subtext is that certain reviewers think novelists can’t make it with pretty girls and make up book-length fantasies about them. A lot of the characteristics of Zoya were taken from my wife, who is a famously pretty woman.

Q. At the end of the book, Zoya marries a talented elderly writer who collaborates with the regime and sweeps away all talk of suffering. What interested you in this writer?

The usual rule was that if you were talented, you did as one writer said, “I’ve chosen the genre of silence,” or you collaborated and killed yourself. It’s a great tribute to talent that if you’ve got it and you betray it, the only option is despair and suicide. I imagine there were talented writers like Ananias in the novel who had talent but who managed both to collaborate and stave off despair.

Q. Have the Russians ever tried to come to terms with the legacy of Stalin and the gulags?

A. The camps got going in 1918 under Lenin and were open until Gorbachev. Slavery was only illegalized in 1989. The Russians clearly haven’t gotten over the gulags. They have never made any attempt to reconcile themselves with their past. That is the thesis of the book, and that is why the country is withering, losing population at the rate of a million a year.

Q. You wrote this book in self-exile in Uruguay. Was it strange writing about Russian suffering there?

A. I wasn’t in a gulag, but it was very difficult writing about intense suffering while living life in a subtropical country, surrounded by my lovely family, with the sea lapping at the garden gate. It was a tremendous struggle to feel that I’d earned the legitimacy to write this book. I suffered as I’d never suffered before while writing a book. It was like gouging material out of a coal mine.

Q. Have you ever been to Russia?

A. No, I’ve never set foot in Russia. I always thought I would after “Koba,” but didn’t. When I started the new novel, I said to myself, you better not go now. It is better to imagine it pure rather than entangled in immediate journalistic sense impressions. Just keep it a thing of the imagination and keep it at that. I certainly will be going to Russia soon.