Colum McCann on One Gypsy's Odyssey 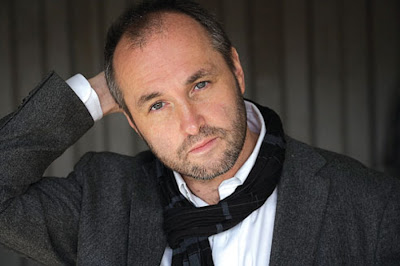 (This story was originally published in the Denver Post on February 18, 2007)

"Zoli" was the novel published before Colum's epic "Let the Great World Spin." Colum blew up as a writer and the rest is history. Here's my interview with him:

Irish writer Colum McCann's entrancing novel, "Zoli" (Random House, 352 pages, $25), tells the story of a Gypsy poet raised in Slovakia during the horrors of World War II and who survived the repression under the communists in the 1950s and '60s. After being shunned by her fellow Gypsies, Zoli must walk across Europe to obtain her freedom.

For McCann, writing about an Eastern European Gypsy intellectual was not planned. In 2002 he had published his acclaimed "Dancer," his retelling of the life of ballet legend Rudolph Nureyev, from Russia to New York. After that wrenching project, he wanted something simple.

"I wanted something easy, something quick," said the 41-year-old McCann, from a bar in New York City, where he lives. "I was going to write a Dublin novel, about where I'm from, so I wouldn't have to travel the world."

His wife, Allison, however, handed him a copy of Isabel Fonseca's "Bury Me Standing," a brilliant history of the Romani people, which is the preferred term for Gypsy. "'Look at the chapter on Papusza,' " recalled McCann, referring to a Polish Gypsy poet who was lionized and used by the communists, then was shunned by her own people.

"I couldn't get Papusza out of my mind," said McCann. "She kept looking over my shoulder. I started writing about her to get her out of my system."

Five years later, McCann has published his lyrical new novel with the fictionalized Zoli standing in for Papusza. "Zoli" is a book of lyrical beauty that breaks through the stereotypes of Romani culture. McCann returns to the weighty subjects of outsiders and statelessness that he addressed in "Dancer." In the new novel, McCann explores Zoli's poetic voice and the creation and meaning of cultural memory.

"Zoli" may also be McCann's breakout novel that will make his a household name. Though his short-story collections and his novels, "This Side of Brightness" and "Songdogs," have received great critical notices in the United States and sell respectably here, they are best sellers in Europe. With his new publisher, Random House, throwing significant money into promotion, this book may finally give McCann the American literary reputation he deserves.

The novel opens in 1930s Slovakia, where the right-wing fascist guard, the Hlinkas, force Zoli's extended family's caravan onto a frozen lake. The fascists light bonfires so the wagons fall through the ice, drowning the people and horses. A 6-year-old Zoli escapes with her grandfather. They travel the back roads and she learns how to read. She survives World War II. As a young woman, Zoli becomes a prominent singer and is embraced by Slovakian intellectuals, who record her and coax her to write a book of poetry.

Finding material on the Romani seemed like an impossible task for McCann. "The more I got into the subject," said McCann, "the less I found. There was little in terms of a grand narrative. I went to the libraries and all the narratives seemed to funnel into the old stereotypes - the jangling bracelets and the headscarves. They were either sentimentalized or brutalized. I knew I had to stay with this."

McCann's breakthrough on the material came when he went to Europe for two months. In Slovakia, he met with a Romani rights group that introduced him to various people. In the city of Bratislava, his hosts refused to take him to the brutal housing projects where the Romani lived. McCann went with a cabdriver instead. "To truly know a city, you have to go to the most dangerous parts," said McCann.

In the novel, the communist government uses Zoli's writing to try to encourage the Romani people to leave their caravans and settle in housing estates. Soldiers chop the wheels off the caravans and burn them. Zoli is scapegoated by her people, expelled from the community and shunned for life. With a knife and the clothes on her back, Zoli walks across Slovakia under harsh conditions to escape to Austria and freedom. She makes her way to Italy and has a family, but loses her voice as a poet.

Along the way in Slovakia, McCann had to shed his own stereotypes about the Romani. "I was sleeping in a Romani caravan," said McCann. "My translator had gone home for the night. I had these pants with zippers in them. My 20s were in one pocket, my 10s in another. The kids would jump all over me, but nothing happened."

That night in the caravan, there was music. McCann got up and sang some Irish traditional songs. "The men had been cordial, but when I sang 'Carrickfergus,' they embraced me. They heard something, a rhythm."

In "Dancer," McCann rewrote Nureyev's life story. With the Romani, the writer observed a fierce attention to detail and ritual, including the coins sewn into young children's hair, the giant harps the musicians would play and the harsh banishment that Zoli receives. McCann spent two years searching for Zoli's voice to write an epic poem by her that is in the book.

"With Nureyev, I knew that he could take care of himself," said McCann. "Dance critics would still write about him. With Zoli, I felt more of the tension of historical accuracy. I was trying so hard to tell the story.

"When I finished the novel, I was terrified," McCann admitted. "I was not sure what people were going to understand from all of this. The one thing I am proud of is that I think Zoli exists. She is more real to me than any of my other characters."

In the end of the novel, an elderly Zoli meets her daughter in modern-day Paris, to attend a conference on Romani culture. The ending is ambiguous. It is not clear if after all her suffering that Zoli will regain her poetic voice.