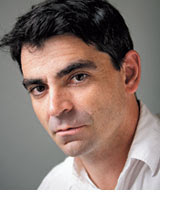 (I interviewed Joseph O'Neill about eight years before his career-making novel "Netherworld"came out. At the end of our 2001 interview, O'Neill told me that his next project was a novel about foreign cricket players in New York. He kept the cricket story and grafted 9-11 on to the novel.)


IN the hallway of the Chelsea Hotel on 23rd Street in Manhattan, a visitor
can feel the ghosts nearby. This battered building is where Brendan Behan
lived during his booze-soaked New York stay. Sid Vicious of The Sex Pistols
killed his girlfriend Nancy here, and it's where the poet Dylan Thomas went
into an irreversible coma.

In a sunny apartment on one of the upper floors, the Irish writer Joe
O'Neill lives with his wife and children. O'Neill has just published his
family memoir "Blood-Dark Track: A Family History" (Granta, 338 pages,
$27.95), which examines his family's ghosts, following the story of his two
grandfathers: Jim O'Neill, a West Cork IRA man, and Joseph Dakak, a Turkish
Christian hotel owner. Both men were imprisoned during World War II - Jim
O'Neill by the Irish Free State and Dakak by the British in Palestine.

Blood-Dark Track is an examination of secrets and hidden truths, many
buried like bodies in a ditch. It also draws parallels between sectarian
violence in Ireland and Turkey.

In an interview at the hotel, O'Neill discussed his book, his family's long
Republican pedigree and the Irish-American problems with the peace process
in Northern Ireland.

"To study my grandfathers is to study what happens to the individual when
they are caught up in history," said the 37-year-old O'Neill.

"The challenge of a book like this is talking to people before they die. It
is amazing how fragile this history is. It disappears with the people."

In O'Neill's family history, there are many murky places. Jim O'Neill,
legend has it, was the gunman responsible for the 1936 IRA assassination of
Admiral Henry Somerville, an Irish Protestant and British naval veteran.
The murder of Somerville led to Eamon De Valera banning the IRA.

Joseph Dakak, on the other hand, was arrested by the British in 1942 when
he went to Jerusalem to buy a shipment of lemons. He was never charged, but
was held in various brutal prisons for three years on suspicion of being a
German spy.

In "Blood-Dark Track," mysteries swirl around. Joe O'Neill's uncle shows him
a rusty revolver that killed Somerville. Was Jim O'Neill the gunman? At
Joseph Dakak's hotel in neutral Turkey, German diplomats drank with British
spies in a Casablanca-like environment. Was Dakak giving information to the
Nazis?

"Blood-Dark Track" is illuminating in its history of Ireland in the first
half of the 20th century. For many Irish Americans, IRA history ends with
the death of Michael Collins in the Civil War, then picks up again in the
Bogside in 1969. This might be because the Clancy Brothers and the Wolfe
Tones didn't sing about the 46-year period in between. O'Neill covers the
sectarian violence in the 1920s where some Protestant civilians were
slaughtered, the IRA activity in West Cork in the 1930s and the murder of
Admiral Somerville.

During World War II, the Free State kept IRA men at the Curragh,
a-racecourse turned into a military base, in worse conditions than the
German POWs held next door. The IRA men were detained to prevent them from
attacking the British, to maintain Irish neutrality. O'Neill documents the
infighting among the IRA, as well as the harassment and job discrimination
that Jim O'Neill suffered from the Irish government for decades after he
was released in 1945.

Joe O'Neill's own background is quite complex. His parents met in Turkey
when his father was posted there with an American construction firm.
O'Neill was born in Cork, but raised in Holland. His English accent comes
from going to the British International School and Cambridge. He worked as
a barrister in London and has written two novels. He has been in New York
now for three years.

"I've always seen myself as Irish," said O'Neill. "I'm an Irish citizen and
have never aspired to the citizenship of another country. I think it would
be a pretty parochial view of Irish nationalism that would exclude someone
like me."

O'Neill said that his accent has caused him problems: "The Irish can be
jealous of their own Irishness, and can be contemptuous of Irish Americans
or Irish like myself with an English accent."

The initial inspiration for Blood-Dark Track came 15 years ago when O'Neill
discovered a document in Turkey that Joseph Dakak had written of his
imprisonment. Dakak himself died in 1964. O'Neill started on the book in
1995, in the last year of his Turkish grandmother's life.

What O'Neill captures beautifully is bloody West Cork. This was an area
that was battered by the Black and Tans during the War of Independence,
where the legendary IRA leader Tom Barry roamed with his men, and Michael
Collins was shot down.

"In the 1950s, when my father grew up, it was a haunted, spooky place,"
said O'Neill, "overshadowed by secrets of a terrible kind--secrets abut
buried bodies and executions, which would have taken place in the 1920s.
When I started the book, I had to penetrate the veil of secrecy."

"He would have regarded his life's main achievement as remaining a
republican during the hardest years," said O'Neill.

"The internment was a demoralizing experience for my grandfather and lots
of other men. He left the camp a very bitter man--bitter over what one
Irishman could do to another."

One of the most compelling characters in O'Neill's book is his 89-year-old
paternal grandmother. Born in 1912, she survived the childhood brutality of
two wars.

"My grandmother belongs to the special category of republican--those that
remember what the British were like in the South of Ireland, the Black and
Tans. Their political assessments were marked by very powerful and bad
experiences."

Eileen O'Neill suffered many hardships with her children during the five
years of her husband's internment. But she was committed: As late as the
1970s, she was using her Cork home as a safe house for IRA men on the run.

In his book, O'Neill also revisits a depressing chapter of the IRA, where
IRA leaders met with the Nazis during World War II to seek help in fighting
the British.

"The idea is that `England's misfortune is Ireland's opportunity.' So you
try to do a deal with the Nazis, suspending your critical facilities on
what they actually do."

O'Neill said that there has been a hopeful reexamination of Irish history.

"It would have been impossible to write like I did about the IRA a few
years ago. The traditionalist nationalist history has undergone a sustained
attack by revisionist historians critical of the founding myths of the
Irish Republic."

O'Neill has said that revisionist historians have gone a bit far in
condemning all political violence. He sees himself as a "post-revisionist"
writer, being more ambivalent about the role of violence in modern Irish
history.

"I've been reading certain Irish-American newspapers and listening to radio
shows that express support for the Real IRA, who disagree with the Good
Friday Agreement, and continue their support in the face of the all-Ireland
referendum," he said. "It is deeply patronizing to the Irish people to say
they are incapable of analyzing their own needs and expressing their own
will."

O'Neill noted that his feisty grandmother voted for the Good Friday
Agreement.

"She examined her conscience, and had the benefit of 70 years of republican
experience. Irish Americans have an important role to play in the economy
and politics of Ireland," he said. "Their responsibility is to make sure
that their intervention is not about gratifying one's own psychological
needs, but putting one's self at the service of Ireland."
Posted by Dylan Foley at 3:13 PM