Michael Ondaatje on His Novel "Divisadero" 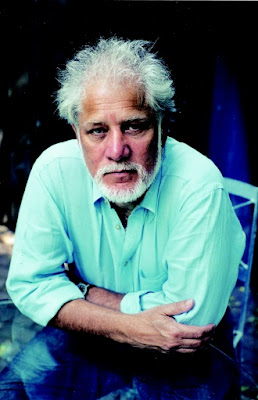 Michael Ondaatje’s achingly beautiful novel “Divisadero,”(Knopf, $25) starts with a brutal beating on a ranch in 1970s Northern California and moves to France of 1950s, exploring the effects of violence, passion and betrayal on families and love affairs.

Coop, the adopted son of a rancher is almost beaten to death by his father, shattering the fragile family and forcing Coop and the rancher’s daughters Anna and Claire out into the larger world. Coop becomes a gambler, running with a dangerous crowd, while Anna travels to France to research the mysterious history of Lucien Segura, a long-dead writer. The novel travels back to Lucien’s life in pre-World War I France, revealing a mostly unrequited love for an impoverished farmer’s wife named Marie-Neige. The tragic relationship between Lucien, Marie-Neige and her husband Roman becomes the most nuanced and passionate story in the book. Ondaatje cuts expertly back and forth from the American casinos of the 1990s to the destitute countryside of early 20th century France. The two sensual parts of the novel are poignantly connected by Anna and her search for romance with a half-Gypsy musician named Rafael, who knew Lucien as a small boy. “Divisadero” is a rich meditation on the meaning of love and loneliness on two continents.

Ondaatje, 63, was born and Sri Lanka and educated in Canada. He is author of several books of poetry, five novels, including “Anil’s Ghost” and “Coming Through Slaughter,” and the masterful memoir “Running in the Family.” His novel “The English Patient” won the 1992 Booker Prize and was made into an Oscar-winning film. He lives in Toronto, with his wife, the writer Linda Spalding. Ondaatje spoke with freelance writer Dylan Foley at his publisher’s office in New York City.

Q. Why did you start the novel on a ranch in 1970s California?

A. I was teaching one semester at Stanford a few years ago, and my wife and I were staying in Northern California. I had a friend who had a farm near Petaluma. I’d go to the farm to write. The landscape was so beautiful. I was seduced. We visited there for the next three or four years while I worked on the book.

Q. What interested you in following Anna to France, which opened up the 90-year story Lucien Segura?

A. It began by following Anna. I knew that she was going to be a writer, a literary historian. When I started writing Anna in France, I thought, “This is where the book goes.” I had written the first half of the book, but then I went to this very poor area in France. I was trying to tell the future of the book by knowing the past.

With whatever book I am writing, I need a physical landscape, a location. In “The English Patient,” I was halfway through the book when I went to Italy and found a place, saying, “This could be the villa.” With this book, I went to France to find a location. Looking around in Auch, I found a house in the country. I saw a peacock on the grounds. It was a possible place for a writer.

I knew that the book had an unusual structure. I knew that I’d get some stick for it. I believe in the structure very much. Lucien’s story doubles the significance of Coop and Anna’s story, and vice versa. The two stories deepen each other. Meanwhile, all these stories were coming out at the same time. There was Claire with Coop, Anna with Rafael, and Lucien with Marie-Neige. They were tributaries coming out of the same California story in a weird way.

Q. The two main parts of the novel, in California and France, had repeating themes of love, betrayal, violence and passion. What were the connection between the two sections?

A. One of the things that came out for me was the healing of art, the defense that art gives us. That becomes the constant thing in both sections. In the first part of the book, Anna cannot talk about the trauma she experienced until she begins to talk to her lover Rafael. In the second part, the Dumas-like novels that Lucien writes act as therapy for him.

Q. Coop becomes a high-stakes poker player, and is put in serious danger when he refuses to be involved in a swindle. How did you write about poker?

A. I am definitely not a good poker player myself. I intentionally didn’t read any of the fine books on the subject. I went to Lake Tahoe and spent quite a bit of time with some professional poker players I met. For me, it was the vocabulary and the way they saw the world around them.

Q. Coop, Anna and Claire are directly affected by the violence in their early life. Do you see an emotional barrenness in their later experiences?

A. For me, one of the most plaintive lines in the book is when the three gamblers come to beat Coop up and he says, “I’ve been here before.” It’s almost a basic rule of life for him, that he is passive around danger. There’s a given guilt. For the others, they continue to repeat scenarios through the rest of their lives.

Q. Before the elderly Lucien dies, he tells Rafael, then a young boy, his philosophy on life. What is it?

A. Lucien believes you can be more intimate by being separate. It’s the odd side of darkness, where you separate yourself from the world to write more intimately about the world around you. It’s a terrible confession by an old man to Rafael, who wants to be an artist.

Q. One of the last tragedies in the book is that the sisters Anna and Claire are still forced apart by their father’s violence. Was this intentional?

A. It’s unintentional. They do have the rest of their lives to meet. It could be a permanent division, but I’d hate to say “This is their fate.”
Posted by Dylan Foley at 3:04 PM