Amy Tan on "The Bonesetter's Daughter" 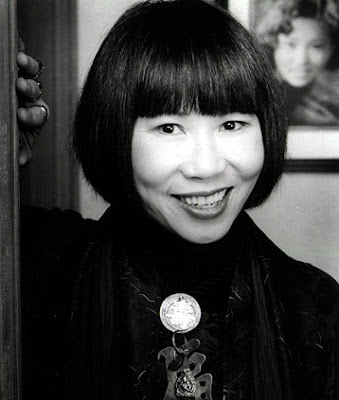 (This interview was originally published on bn.com in January 2001)

An Interview with Amy Tan


Barnes& Noble.com: What inspired you to create the intriguing nursemaid, Precious Auntie, in The Bonesetter's Daughter?

Amy Tan: It is so hard to say where the characters in the most important part of our books originate. All the reasons seem superficial. You have an idea, an image that seems intriguing. I heard a story once about a monk who came and pretended to put ghosts into jars.

My mother had been scarred around her face from an accident when she was young, and there was a certain quality of speechlessness in all the women in our family that manifested itself in different ways. My grandmother was not able to speak about her despair until she killed herself, and my own mother wasn't able to tell the terrible stories from her own life until much later. And there is a certain quality of speechlessness that all women have, even very modern women today in a country such as the United States, women who feel that they have lost their voice.
I think that the most emotional part of what defined Precious Auntie as a character was my ongoing desire to find out who my grandmother was and the legacy she left us.

B&N.com: How much of your grandmother's story did you know when you began?

My mother was born in China with one name, then her father died, and my grandmother was taken into another family. She was raped and became a concubine against her will. She killed herself, after the baby that resulted was born. I heard bits and pieces later in life. I knew none of this when I was growing up.

These were the tragedies that informed my mother's life. She would tell me these horror stories. "Don't let a man take advantage of you. Then you'll have a baby, you'll kill the baby and your life would be over." I didn't even know how reproduction happened. My mother had gone through such an abusive first marriage, and then knowing what had happened to her mother, she was so afraid that the same thing would befall me. I had no context for why she'd made these warnings.

B&N.com: Why did Precious Auntie try to commit suicide by drinking molten ink?

AT: The way it happened in the story was that she was looking for anything to kill herself with, and she happens to be there in the ink studio. What feels right to me is that ink is what you use to write words down. Ink is what lasts. Ink does not come off. The ink contains all potential words that could have been said. Her granddaughter later becomes a ghostwriter. Though she doesn't use ink, the metaphor is still there -- the words coming out, the words able to be said, and what Ruth does with the words is speak for other people, never herself.

B&N.com: When Ruth was pretending to channel Precious Auntie by writing in a tray of sand, what was she doing?

B&N.com: There are a lot of themes on identity and loss of identity in your book, such as LuLing being thrown into an orphanage when her real mother dies. What inspired you to write about this?

AT: In our family, we've had issues on the loss of identity, which is a very American concept, and where the American side of the story comes in. My mother left behind a life in China. She left behind three daughters -- she was a fairly well-to-do woman -- and a whole past, a language. She created a new identity here. That identity of who she was in China pervaded everything she did, and I didn't know what that was. My grandmother's identity exists only in a memory of a memory: my memory of my mother's memory of who my grandmother was.

The whole idea of existence -- the loss of one's memory of that person, which happens when one loses their memory, as my mother did -- was all tied up in a mix of emotions for me. It is my form of ancestor worship. Ancestor worship is so important in China, not in the sense that you make them into deities, but that they continue to exist as long as you remember them. It is very important to remember them, to do rituals. This is my ritual -- writing about my ancestors.
My grandmother is on the cover of the book. I wrote with her in mind. I suggested to Putnam that they use her photograph and they agreed. I was thrilled!

B&N.com: Your books include spirits, like the ghost of Precious Auntie destroying the ink shop. How did spirits permeate your childhood and form you as a writer?

AT: I grew up with several kinds of spirits in my imagination. My father was a Baptist minister, and he believed in the Holy Spirit. My mother was fairly quiet about her beliefs, which were an eclectic mix that are typical of a lot of Chinese; a mix of animism, ancestor worship and Buddhism, and even Catholicism, because she went to a Catholic school. My mother used to talk about ghosts, from the time I was a little girl. I would say that I saw a ghost in the bathroom. My mother would get really excited and say, "Where, where is she?" She was sure that it was somebody that she knew. If something happened that was disturbing to her, she was sure that it was related to a spirit. When my father died, all the ghosts really came out of the closet. She talked very openly. She made me use a Ouija board to talk to them. I would get advice from them about my father and brother, and what investments we should play on the stock market.

B&N.com: An important subplot in your book involves the dragon bones, the mystical fossils that turn out to be the bones of the Peking Man, the first human skeleton found in China. How did you decide to incorporate this into your book?

AT: I am trying to remember when the image of the bones became so strong for me. I thought of it like the excavation of my own memories of my mother, and finding these pieces at one point. I remember coming across an article about how the bones of the Peking Man had disappeared. My God, all these people who did this great effort to discover the bones, then they found it, knew its value, then lost it again. This is so much like what happens when we finally get to know our own past through our parents, then we lose them. That was the reason why I decided to set the book in the Mouth of the Mountain, near where Peking Man was discovered. But I also had the idea of a bonesetter and started hearing about dragon bones, which is where the early fossils were found, and all of it came together. It was almost too much emphasis, but in Chinese culture, nothing is subtle. Symbolism is a very big part of Chinese culture. Oh, and I am a dragon, and my mother was a dragon! We were both born in the Year of the Dragon.

B&N.com: Did the bonesetters use the fossils as medicine?

AT: The dragon bones were used for medicinal purposes. They were crushed and used as medicine.

B&N.com: You write about the generational conflicts between immigrant mothers and their Americanized daughters so well. It seems like the mothers are constantly criticizing their daughters, though the love is so profound. Where does the criticism come from?

AT: Criticism I grew up with! Everyone I know who had a Chinese mother who came from the mainland grew up with that criticism as well. It seems natural to me. I do not know if it is Shanghai-nese [where Tan's mother is from], the Chinese, or all mothers, but the criticism always means, "I think you deserve better." What the child hears is, "You never think that I am good enough." It's interesting to me, that loss of translation. Again, we are unable to say what we mean.

I, for example, am still very uncomfortable with compliments. I don't know what to do with them. On the other hand, I don't think I need compliments to make me feel that I know what my worth is. I think it can be a good thing, as well. I think my mother wanted me not to rely on other people's opinions for me to know what my opinion of myself was.

AT: I usually write in a very womblike place. I have two offices, one in New York and one in San Francisco. The one in New York is a former closet. It has very low ceilings. It is painted a rust-colored red. It has antique Chinese furniture in it.

Here in San Francisco, my office is more modern, with mahogany built-in bookshelves. The room is a bit larger. I have a window, but the curtains are always closed. The room is painted dark green. It's cluttered with tons of stuff, knickknacks and mail I have not looked at.

B&N.com: You don't enjoy the views?

AT: I cannot deal with those distractions. I had a beautiful office with views of the Golden Gate Bridge and the Bay, but my assistant, Ellen, has that office now.

B&N.com: What is your next project, if that is not a rude question?

AT: It's not a rude question, but it is a question that I can't really answer. For me, I've found that if I talk about what I think a book is about, it is almost like deconstructing a book. I have enough time after I've written a book, but before I've finished, I almost feel like I am going to let the air out of the balloon when it has not even risen yet. I can only talk about it in vague terms. I know it is going to be very different. I don't know if it is going to delight my publisher or horrify them. I am very excited. I started it an hour after I finished this last book in August, after this moment of speechlessness.

B&N.com: Do you have a week of speechlessness every year, like Ruth in The Bonesetter's Daughter?

AT: I used to. I had a speechlessness that came around my birthday. It was related to a trauma that I'd had. One of my best friends, my husband's and my roommate, was murdered that day in a brutal way. I had to identify the body and go through the room, seeing the blood. You could smell what had happened in there. I went through the routine of identifying what was missing, but I really couldn't talk about the other things. So every year for ten years, I became mute on that day.

Amy Tan spoke from her office in San Francisco with interviewer Dylan Foley, a freelance writer living in Brooklyn, New York.
Posted by Dylan Foley at 5:42 AM