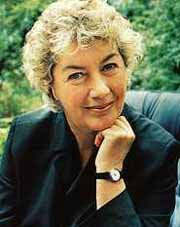 Nuala O'Faolain was a fascinating writer, with one of the most caustic inferiority complexes I have ever come across. I interviewed her three times, and she always had to draw blood.

This interview took place at her boyfriend's brownstone in Brooklyn. She had an intense love-hate relationship with the man's seven-year-old daughter, which was creepy that the man even let Nuala in his house.

Nuala died in 2008, and she did not go quietly, keening on her deathbed for herself.

It was a bitterly cold, winter day in Brooklyn and Nuala O'Faolain was having a rough time. The sixty-ish Dublin writer couldn't get her printer to work or figure out how to open her CD-ROM player. Even worse than that, a burning log rolled out of the fireplace, threatening to burn down her house.

Luckily, the runaway log was captured and that modern shaman, the computer repair guy, arrived. Our interview could now start.

Six years of success has thrown O'Faolain for a loop. First, her memoir "Are You Somebody?" made her famous, then writing her novel "My Dream of You" brought her from Ireland to New York.

Now computer dating (yes, computer dating) has her living in a brownstone with a lawyer and his 9-year-old daughter in that center of liberalism, Park Slope, Brooklyn. True to form, O'Faolain is torn between love in Brooklyn and home in Co. Clare.

"Where do I live?" asked O'Faolain, her brilliant eyes shining with a touch of mad rage. "That is the most comprehensive question you can ask of yourself."

O'Faolain has just published her second memoir, "Almost There: The Onward Journey of a Dublin Woman," which chronicles her life since "Are You Somebody?" She writes of her path from being an Irish Times columnist with a lonely-but-solid life, to a writer with an uncertain future, who is the object of tens of thousands of strangers' affections.

She details her battles to accept the love of her new boyfriend John and to not become a "Mommy Dearest" character to his daughter Anna. Circling the room is the ghost of O'Faolain's alcoholic mother, with her ability to crush self-esteem with her fingers at will.

"The last six years have for me have been very chaotic," she said. "I had arrived somewhere I didn't understand. My first memoir I understood through and through. When I ended up in Clare with my little dog Molly, alone on Christmas Day, I knew who I was and where I was.

"Now six years later, 1 haven't a clue. I am in the wrong place, the wrong country, the wrong ambiance. I wanted to sort it all out for myself."

To make sense of the chaos, O'Faolain decided to write another memoir. Second memoirs, however, can be the publishing kiss of death.

"My editor Julie Grau said to me that second autobiographies always fail," she said. "Look at Mary Carr, and even Frank McCourt. I said I'd do it very
quickly."

In "Almost There," she talks hopefully of reaching the calm water of late middle age, but then denies herself this tranquility. With O'Faolain and her memoirs, there is no closure, no Hollywood ending in soft focus. There is a longing for Ireland and much culture shock about Brooklyn.

"I can't make Park Slope seem natural," said O'Faolain. "The grayest, greasiest day in some awful concrete Irish village, in some smeary pub where boring people are half-drunk, is natural for me. Coming into the end of middle age, I am more lost than I was at 17."

O'Faolain rails against the New York intelligentsia. "It is all therapy and Prada sneakers," she growled. "In Ireland, the evenings are for amusing other people and yourself, preferably by talk. The little I know about middle-class Brooklyn life is that they forgot everything they knew about talking. They exchange nuggets about their children, because they have nothing to talk about."

Americans also have a hard time with her forceful opinions. "There is a sweetness of manner," said O'Faolain. "I see people's faces crumble slightly when they see the vehemence of how I express myself. They believe in mildness. At home, we say feck in every sentence. Here, they think you mean it."

O'Faolain writes with brutal honesty about the difficulty of accepting a new love affair. There is also a certain irony to a writer who articulates loneliness in such beautiful prose grappling with a new family.

"I am a bossy middle-aged woman, who made my decisions long ago," she said. "He is a middle-aged man who has made his decisions. Everything in the house shows that he has lived a life. To me, this house is Bluebeard's castle," she noted, indicating quirky European Communist Party posters on the wall and small farm implements displayed on a table. "It is full of decisions made with other women, at other times, for other reasons. Why are the knives in that drawer? Because they are!

"At times, I run out of the house in a rage, and I might as well be my wretched mother," said O'Faolain. "Anna is a great little kid who likes me, which is an amazing thing. I don't think I am going to make it with John and Anna. I feel like such a stranger. They are living a warm life here. I don't know how to make a family. I think I am going to go back to Ireland."

Readers of Are You Somebody? will be familiar with O'Faolain's soul-destroying parents -- her philandering journalist father and her drunken mother, who perfected a crushing indifference to her children.

The mother comes back in Almost There as a malevolent spirit. "Again my mother is all around me," said O'Faolain. "I have my old selfishness. John wants me here, and that makes me angry. I am hoping and praying that I will get used to them."

O'Faolain is amazed at John's patience and balance. "John is surprisingly unangry," she said. "If he were an Irishman, it would be murder."

Nuala's mother appears to he impossible to get rid of. "What I say about my mother is that underneath it all, there was an existential experience of being completely unloved by anything in the universe," she said.

"The whole reason she was mad about passion, mad about drink, was for temporary relief from having no comfort about being alive on this earth. Many Irish people are like that. They are broken off from the sources of warmth."

O'Faolain recounted how her mother would constantly hum when her children were talking to her. "It was the sound of, `Go Away, Go Away. You are intolerable to me!'" said O'Faolain. "It turns out that the wicked witch is still here."

As a memoirist, she still has much ambivalence to therapeutic writing. "I am trying to control the pain of the past through amateur writing. In America, if you can say it all out, you are cured. It is too lightly said. I'm here to say that it doesn't cure you."

Her mother is even infiltrating her new writing. "I am now trying to write a light novel to get away from my mother," she said. "It turns out that the heroine of the novel has a little eccentric mother who turns up in America."

What often keeps O'Faolain going is the support of her many fans. In "Almost There," she writes with amazement at their openness towards her.

"Reading at the bookstores has been an incredible resource for me," she said. "If loneliness is what brings me and my readers together, then loneliness is the name for humanity. That is our commonality."

"Almost There: The Onward Journey of a Dublin Woman" by Nuala O'Faolain(Riverhead, $24.95)