Aravind Adiga on the Brutal Social Mobility in "White Tiger" 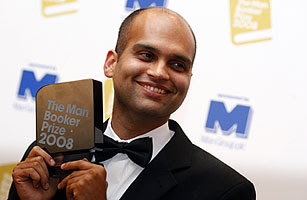 In the Indian writer Aravind Adiga’s hysterical, darkly comic novel “The White Tiger”(Free Press, $24), Balram the driver has murdered his boss, absconded with a bag full of money and gone to the gold rush town of Bangalore to become an entrepreneur. The now successful Balram confesses all in a warped letter to the Chinese premier Wen Jiabao, setting up a great satire of modern Indian society, where the rich explode in a world of gluttony, cell phones and prostitutes, while the poor villagers at home and in the city are crushed underfoot.

In a wicked relief from the overly nostalgic Indian novels of Jhumpa Lahiri and Rohinton Mistry, Adiga shows the brutal life in the impoverished Indian villages, where villagers are left destitute, hungry and uneducated by pervasive corruption. Balram is sent to a big city to become a driver and winds up working for the son of a major landlord from his hometown. In his letter to Wen Jiabao, Balram writes with awe and scorn of the New India of cell phones and call centers. Balram sees his opportunity with a bag of money meant for a corrupt politician. Only by killing and robbing his master, he reasons, can he become an entrepreneur and rich man himself.

Adiga, 33, was born in India and educated at Columbia and Oxford universities. He was business reporter for the Financial Times and a columnist for Time Magazine. Adiga spoke with freelance writer Dylan Foley by telephone from his hometown on Mumbai, India.

Q. How did you start “The White Tiger”?

A. In a sense, the novel is about my rediscovery of India, which I’d known until I was a teenager, then I came back here as an adult. In the novel, I was trying to make sense of two things I saw in India-- the extent of how things have changed and how they have not changed. When you are out of India for a while, you lose touch with the class system and the master-servant relationship, which is not a fact of life in New York where I spent ten years. One thing that strikes you in India now is the phenomenal disparity of wealth that has really accelerated in the past decade. There is a broad consensus that the economic boom has not trickled down to the poorest. There are 250 to 300 million middle-class people, but the population is still over 1.1 billion people. There is still massive destitution, poverty and malnutrition.

The point of the book for me was why doesn’t this massive poverty lead to greater crime? In India, there is very little crime. Why do poor people get on these cramped buses to travel for hours to work at the master’s house, to do everything the master wants for $60 a month? How does the social structure work? What if a man decides to break this social structure?

Q. How does Indian social structure keep people in their place?

A. India has historically had a weak political structure, but a strong social one. In the villages, there is a strong family structure. Family and society operate with a rigidity that is alien to the West. A person’s conception of self is their family, their clan. That’s why there is so little crime.

Q. By murdering his boss, what decisions does Balram face?

A. There are two decisions that he is going to make. First, that he will sacrifice his entire family, who will probably be killed. Second, that he will lose his connection to who he is. Family is the most basic definition of who you are in India. When you travel through the poorest parts of India, you ask people why do they trust their servants? The answer usually is, we know where his family lives. There is usually a veiled threat of some kind. When Balram decides to take the money and go, he is making a brutal decision.

Q. How did you put Balram together as a character?

A. When you go through India, you meet many men who only have two or three years of schooling. They are half educated. They can do certain 21st century things, like operate a cell phone or a computer, but their ideas in religion, women and race are influenced by paranoia. Balram’s a real jumble of a man, both past and present.

A lot of middle-class Indians have three or four servants--a driver, a chef, a cleaner. These people, like Balram, are often invisible. They come into your room to do your stuff and you don’t notice them. The middle-class don’t notice the poverty around them. This situation brought Ralph Ellison’s “Invisible Man” to mind.

Q. What kind of master was Ashok, the murdered man?

A. Ashok was very much an okay kind of master. Some readers have thought he is a caricature of the evil master, but that is not the case at all. There are two immigrant stories--the villager coming to the city, and the Indian living abroad who comes back to India. This book is about the tragedy of both master and servant, for the system corrupts them both.
(This interview ran in the Newark Star-Ledger in May 2008)
Posted by Dylan Foley at 11:42 AM