Ian Jackman on the Joys of Regional Eating 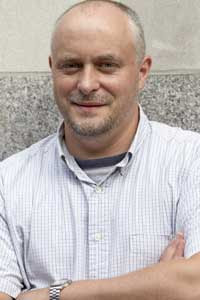 (This interview originally appeared in the Denver Post on August 5, 2007)

For the past 30 years, eating on the major highways has become a grim affair with fast-food restaurants like McDonald's, Burger King and Denny's killing local diners and even pushing regional cuisines off the main roads. The malls outside America's cities are no better, with cookie-cutter food courts packed with franchise eateries, where quantity reigns over quality.

Well, the counterattack against homogenous corporate food has a new hero in Ian Jackman and his new book "Eat This! 1001 Things to Eat Before You Diet." The New York-based British writer's guidebook and travelogue of America's regional cuisine and fresh produce extols the virtues of chiles in Santa Fe, barbecue shacks in North Carolina and exquisite Japanese sushi in Los Angeles.

In Jackman's enthusiastic account of America's most interesting regional cuisines, he takes a decidedly middlebrow approach, visiting Corky's Barbecue in Memphis, Tenn., and Yonah Schimmel Knishes in New York City, whose interior looks like it has been blown up by a bomb.

"I don't think of myself as a foodie," said the 43-year-old Jackman, in a New York cafe known for its Hungarian pastries. "I just enjoy eating. I am not interested in which famous chef is opening a new restaurant. I like context, history and place."

For Jackman, the love of place means paying homage to the Original Pantry, a Los Angeles eatery famed for its classic pancake and eggs breakfast menu and for its repeated appearances in the thrillers of Michael Connelly. Not far away, at a Los Angeles farmers market, he found one of the most wonderful apple fritters in America.

The structure of the book is straightforward, covering eating in, which includes fruits, vegetables, breads, meat and fish, and eating out, which covers burgers, stews, barbecue, sandwiches, chili and pizza.

Jackman's two-year odyssey following the great regional food of America was guided by experts. "I called people around the country and asked them if I was coming to their part of the country, what food would they recommend," said Jackman. "I called Ellen Sweets of The Denver Post, and asked her what would I have to have if I was in Denver." (She recommends the Buckhorn Exchange, a steakhouse).

"I called Seattle to find out what I should have in Seattle. Food writers were very generous with their time. They said, 'These are the regional specialties.' In Cincinnati, it is the local chili."

Denver and Colorado come in for loving scrutiny because Jackman's brother-in-law lived in Denver. He found himself bewitched by the eccentricity of the Fort restaurant, Sam Arnold's 44-year-old eatery. Arnold had his restaurant built out of 8,045-pound adobe blocks, based on 19th- century drawings of a frontier outpost. Jackman also writes up Sam's No. 3, a quintessential Greek diner in Aurora, and waxes poetic on their massive breakfast burritos.

At the Black Bear Restaurant in Green Mountain Falls, near Colorado Springs, Jackman listens to chef Victor Matthews talk up the local food, from organic mushrooms to the lamb that winds up on menus in Tokyo.

In Manitou Springs, Jackman talks with chef Lawrence Johnson, whose Briarhurst Manor restaurant is located in a 19th-century mansion built by an Englishman who imported an Italian chef. The Italian chef wound up trading supplies with the local Ute Indians. Johnson "prefers the term 'Rocky Mountain cuisine,"' writes Jackman. "He pairs game like deer, bison, elk, snake and trout with indigenous produce grown on the property and from nearby farms."

Jackman takes jaunts down through the South on his way to Florida. He hits the Southwest, going through Arizona and New Mexico. Often he travels with his wife and two young children, balancing his need for wonderful Cuban food in Miami with his son Max's need for a simple hamburger. He has an almost religious experience with the chiles at Tomasita's, a restaurant housed in an old train station in Santa Fe.

"One of my best experiences was eating the green and red chiles in Santa Fe," said Jackman. "I had eaten good, spicy food in other parts of the country, but in Santa Fe, it took on another level of sophistication."

Jackman found surprisingly good cuisine in strange places, such as the great plate of enchiladas he ate in a drugstore restaurant in Albuquerque. In Oklahoma City, he muses over the need to eat lamb fries, which are lamb testicles, lightly battered and fried.

Jackman argues for slowing down and going off the beaten path to find great local establishments. You often don't have to go far from home to find a good restaurant. "You really need to treat your town as if you were a tourist," said Jackman.

Jackman proves to be an enthusiastic eater. He is concerned with great gastronomic experiences, but doesn't worry about hitting the "best" restaurants in the United States, dismissing the label.

"What is the criteria for the best?" asked Jackman. "Is it the best tasting or the best presented? Everybody has different criteria, and the food in the same restaurant changes every day."

"Eat This!" is best sampled by region. It is the kind of book that you should throw in the glove compartment of your car if you are taking a long road trip. The 1,001 restaurants, farms and local produce stands are all well-documented. Jackman is a great guide with a passion for the colorful tangent.

After two years, Jackman estimates that he has sampled more than 500 of the local cuisines in the book. In part, it became a guide for his own future culinary endeavors. "I decided that the book had to be a roadmap for me going forward," said Jackman. "It is a wish list of the places where I want to eat next."

Dylan Foley is a freelance writer in Brooklyn, N.Y.
Posted by Dylan Foley at 10:50 AM